“A Christian minister who has had heated arguments with Muslims on his TV Gospel show has been brutally attacked by three men who ripped off his cross and warned: ‘If you go back to the studio, we’ll break your legs.’”

For the full Story go to http://www.cbn.com/cbnnews/shows/cwn/2009/March/UK-Minister-Brings-Muslims-to-Christ-/ 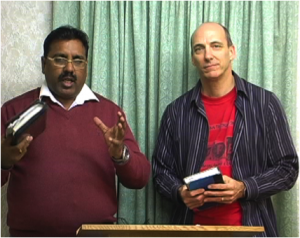 (Left) The Rev. Nobel Samuel and The Rev. Brian Harley, presenting Jesus’ promises of the Holy Spirit for a TV and Internet audience in Urdu and English, at the Launch of the Growing the Church Equipping Course in the UK in November.

This event happened back in 2009 but its effects were still vivid in the heart of the Rev. Noble Samuel, the Pakistani pastor I (Brad Long) just met at the UK Growing the Church event. As he told his story of how he had been attacked by three Muslim men, I just assumed that this was somewhere in Pakistan. But then, with a shock I realized that this attack had taken place in West London, England!

It is clear that Satan is seeking to stop the advance of the Gospel of Jesus Christ into the Muslim world by any means possible, including not just the threat of death, but actual attacks upon Christians.

The Rev. Nobel Samuel has lived in England for 18 years and serves as the pastor and leader of the West London United Reformed Asian Christian Fellowship which is a thriving and growing congregation of people from Pakistan and India. He also has an hour-long TV program that goes all over the Urdu-speaking world via the internet. In that show, which welcomes people to call in with their questions, he has been able to share Christ with many Muslims, Hindus and Sikhs of all nationalities living in London. Many come hungry for answers to life’s questions and many have come to faith in Jesus Christ. He has also come under attacks from Muslims, and in this case was physically assaulted.

While at the five-day launching of the Growing the Church at Barnes Close outside of Birmingham, England, the Rev. Samuel got very excited about the teaching we were doing on how we are called to cooperate with the Holy Spirit in building the Church. He came up to me and said, “This is just the teaching we need to bring revival to the Christian Churches that are being persecuted in Pakistan. It would of course be very dangerous for both of us to go to Pakistan, but if God opens the door we must go!!!” That sounds like the beginnings of another Macedonian call to me! I said, “Of course I will pray about it.” Then Nobel said, “Well, until that door opens let’s not sit around, let’s go over the TV and internet!”

That led us to the next step in this incredible drama of bringing the Gospel to Muslims and to Hindus. We taped two segments for his TV program. The first one was with the Rev. Brian Harley, who is a URC pastor and the Chairman of the Group for Evangelism and Renewal in the United Reformed Church in the UK. (http://www.gear.org.uk) He is also a member of the Dunamis Fellowship Britain & Ireland. Brian did a great job presenting the promises that Jesus Christ has given us of the Holy Spirit.

It was a joy watching these two men of great faith, one English and one Pakistani, both anointed by the Holy Spirit with a passion for Jesus Christ, sharing together Jesus’ promises of the Holy Spirit for every believer.

Then I followed with some application as to how to minister in the power of the Holy Spirit. Nobel was the enthusiastic and obviously anointed translator for both of us.

Please pray that the Holy Spirit will greatly use these two videos to encourage Urdu-speaking Christians to grow in all the promises of Jesus Christ so they may become His powerful witnesses. Pray that the Lord will use these messages to reach into the hearts of those in the Urdu-speaking world who do not yet now Jesus which is millions of people!

Part 1: The Promises of the Holy Spirit to All Christians

by Rev. Noble Samuel and Rev. Brian Harley in Urdu and English

Part 2: Cooperating with the Holy Spirit to Witness to Jesus

by Rev. Noble Samuel and Dr. Brad Long in Urdu and English

While in college I spent several summers in India and even studied Hindi, which has many similarities to Urdu. It was actually in India that God called me into the Gospel Ministry. I have also been to Pakistan and my parents lived in Islamabad for several years. My mother loved Pakistan and the people; I even have an adopted brother from Pakistan who is Muslim and a man of great integrity. So now, to be translated into Urdu and speak to people from Pakistan and India about the Gospel of Jesus Christ and the power of the Holy Spirit was a deeply moving experience for me. I found a great love and longing for Muslims, who like my Muslim brother are often truly are seeking to please God, to know the love and forgiveness of Jesus Christ who is the Way, the Truth and the Life and the only Way to God the Father. I believe many Muslims and others of many faiths, are those whom the Bible would welcome to come to know Jesus Christ as those who “fear God.” ( Acts 13:16,26) Our role as Christians is to reach out to them in love and respect, as well as a readiness to share the Good News. We are also called to do the work of intercessory prayer by standing in the gap for them in the “heavenly places” with Jesus.

For more information on praying for the advancement of the Gospel in Pakistan and India as well as in the United Kingdom, Canada and the USA, please contact The Rev. Samuel Nobel at nsamuel21@yahoo.com