The Moses Work and the Joshua Work 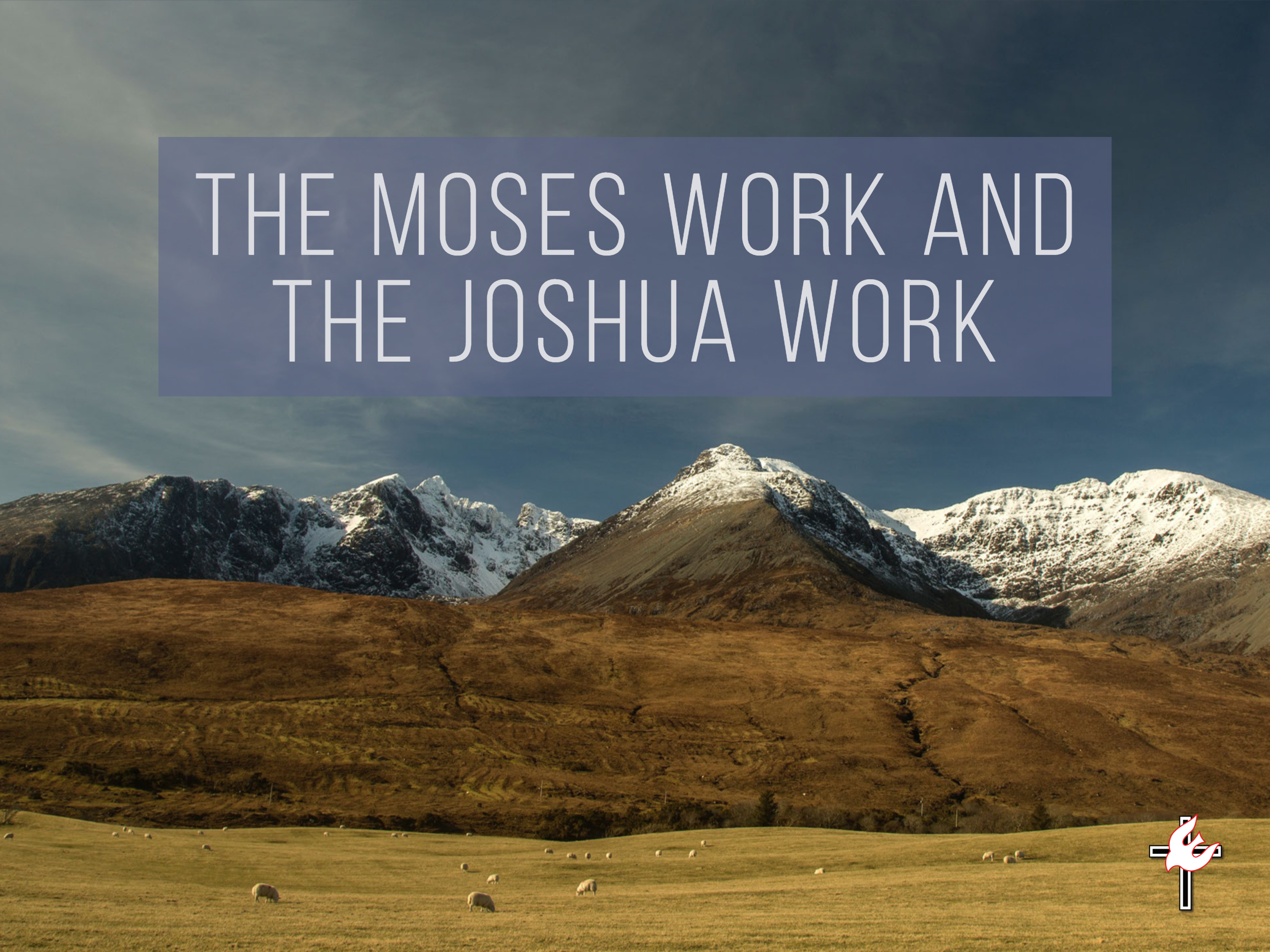 Prayer is vital for the fulfillment of vision.

But so, too, is human action that works to enact the vision.

The participation of God brought down by prayer is like rain falling on an unsown field; the field has to be sown and cultivated to bring forth fruit.

Christians constantly err in this matter. They either emphasize works so much that they neglect prayer, or they put so much emphasis on prayer that they fail to labor for the vision.

In either case, vision does not move toward fulfillment and our prayers do not shape the future.

Read: How Vision Fuels our Prayer

We see the dynamic relationship between prayer and action in the Hebrews’ battle with the vision-quenching Amalekites in Exodus 17:8-16.

The Amalekites came and attacked the Israelites at Rephidim. Moses said to Joshua, “Choose some of our men and go out to fight the Amalekites. Tomorrow I will stand on top of the hill with the staff of God in my hands.”

When Moses’ hands grew tired, they took a stone and put it under him and he sat on it. Aaron and Hur held his hands up– one on one side, one on the other– so that his hands remained steady till sunset. So Joshua overcame the Amalekite army with the sword.

Then the LORD said to Moses, “Write this on a scroll as something to be remembered and make sure that Joshua hears it, because I will completely blot out the memory of Amalek from under heaven.” Moses built an altar and called it The LORD is my Banner. He said, “For hands were lifted up to the throne of the LORD. The LORD will be at war against the Amalekites from generation to generation.”

Out of this story of the battle between the Israelites and the Amalekites, we find that there is a complex interrelationship between God working in the intercessor and God working in those who are working in other arenas to do his will. Through this complex relationship we see God’s Kingdom work taking place.

In this great battle are four major actors:

The Amalekites can be symbolic of those opposed to the advancement of the Kingdom of God.

Moses engaged in victorious warfare over Amalek, by interceding for the preservation of the people.  He fought spiritual battle as intercessor for the people of God.

Christians have usually focused on Moses the intercessor and forgotten Joshua the warrior. We seem to think that it was Moses and God who won the battle.

But the work of Joshua was just as important.

The victory required Joshua to use all the courage and military skill he and his soldiers could muster; otherwise, God would have lacked the means though which to answer the prayers of Moses.

An important thing to learn from the battle with the Amalekites is that normally God wants a balance between Moses’ work of intercession and Joshua’s work of engagement in the world.

Today, in the advancement of the kingdom of God, there is this same working on two fronts or on two dimensions. On one level is Moses work of prayer; on the other is the Joshua work of action.

This is not necessarily a balance of numbers.

There were only three intercessors on the mountain, whereas there were likely thousands of soldiers doing the Joshua work.

In calls to prayer there often seems to be the assumption that the more people you can get praying, the more God will answer. We believe this to be a false assumption. It is not the number of intercessors that matters, but rather, whether or not those called to the work of prayer can actually enter into the place of intercession.

Moreover, the degree of unity achieved seems to matter.

James 5:16 reports that, “the prayer of a righteous man is powerful and effective.” The next two verses cite the example of Elijah, a man like us, who had great power as an intercessor.

When this balance occurs, there are great works of God, and history is shaped according to God’s purposes.

Getting this balance right is critical to the advancement of the kingdom of God.

Historical Example in the 20th Century

Here is one famous historical examples that illustrates this principle in bold relief.

In the spring of 1940, the Germans were sweeping across Europe. Belgium and Holland had been invaded. The situation for the British army was desperate. The German army in France had trapped 338,000 British, Belgian, and French soldiers with their backs to the sea.

The struggle was military as well as ideological and spiritual.

During the first disastrous phases of the war, Rees Howells, with a few students at the Bible College of Wales, was earnestly doing the work of intercessory prayer.

Surely this lonely work of intercession was joined by a great concert of prayer offered by the soldiers on the beach, their mothers in England, and others who cried desperately to God for help.

But Rees Howells seems to have gained a special place of intercession. His prayer journals are full of occasions when he sensed greater and greater authority and privileges in prayer, all gained at great personal cost. This was the Moses work.

At the exact time of the impending disaster of Dunkirk, the prayer journals of Rees Howells and his students record the following:

On May 28, Mr. Howells again was alone with God. In the meetings, the prayer was for God to intervene at Dunkirk and save the men. As the Spirit came upon them in prayer and supplication, what one prayed at the end expressed the assurance given to all: “I feel sure something has happened.”

May 29 was the day of the evacuation of Dunkirk. Mr. Howells said, “Let us be clear in our prayer that the intercession is gained. The battle is the Holy Spirit’s. See Him outside yourselves tonight; He is there on the battlefield with His drawn sword.”

May 30, 7:30p.m. “From a worldly standpoint there is no hope of victory; but God has said it. I could not come tonight and ask Him to intervene because we have already said that He is going to intervene. Instead of bad news about our soldiers, if He is on the field of battle He can change that and make it very good news. Oh, for God to lift us up tonight! We are not to run into any panic thinking the Nazis are going to win: Germany must be delivered as well as England and France. We may have to go through far greater sufferings yet, but I am not going to doubt the final issue. We state in plainest terms: The enemy will not invade Christian England.”

This was the extraordinary work of intercessory prayer by the Moses team led by Rees Howells. The result was a great miracle of deliverance.

When we look back now after these years, many in Britain still recall the terror of those days.

Remembering the miracle of Dunkirk, acknowledged by various leaders to be an intervention from God—the calm sea allowing the smallest boats to cross, the almost complete evacuation of English troops—and then the lead Mr. Churchill gave to the nation, how thankful we are that God had this company of hidden intercessors whose lives were on the altar day after day as they stood in the gap for the deliverance of Britain.

Praise God for the intercessors, but we must not forget the army of Joshuas—the fishermen and boat owners who risked their crafts and their lives to sail across the channel to rescue the soldiers.

Without them the struggles of the intercessors would have been in vain.

If the fishermen and boat owners had been confused and rushed to the churches for prayer, the army would likely have been destroyed and World War II may have ended differently.

Combining the Moses and Joshua Work

Let this example serve to guide us. Intercessory prayer is necessary work, but it is not the only work. God works through prayer by releasing his power as the Joshuas also do their appointed work.

Moses and Joshua must work together.

Sometimes God calls the intercessor out of the prayer room to become a Joshua.

For example, if we pray for a “hidden people” to come to Christ, we may need to pack our bags, because God may require us to put feet to our prayers.

If a vision burns in you, pray down God’s power and provision for its fulfillment, but know that you may need to get up off your knees and get your hands dirty in the work of the Lord.

Martin Luther, a great intercessor, prayed in the Reformation. He saw prayer as the “almighty queen of human destiny.” His daily hours of prayer were the Moses work.

But he also provided his own tireless labor of preaching, teaching, and writing as a practical embodiment of the vision grasped in prayer. His written works in English constitute fifty-six volumes.

This is but a fraction of his colossal Joshua work.

As Luther did both the Joshua and Moses work, God birthed the new reality of the Protestant Reformation.

Sometimes the visionary recognizes that his or her gifts and calling are primarily to one side or the other. When this is the case, the visionary must discern whom God is calling to do the other work.

As we share the vision, we can intentionally look for people to do the part of this work we are not gifted for.

The apostle Paul, in one of his testimonies before the Roman authorities, said,

“So then, King Agrippa, I was not disobedient to the vision from heaven. First to those in Damascus, then to those in Jerusalem and in all Judea, and to the Gentiles also, I preached that they should repent and turn to God and prove their repentance by their deeds.”

Through Paul’s prayers and obedience, the vision from heaven was fulfilled. Paul was both Moses and Joshua—and was constantly inviting others to join him in those two roles.

While some people may be gifted in the work of prayer and others in political and practical involvement, God normally requires both types of people to be involved in the work of his kingdom.

Sometimes a visionary is required to be involved both as a Joshua and as a Moses. More often, the two must learn to work together.

“I’m Not a Big Visionary.  How Does This Apply to Me?”

They are applicable to everyday life in your local church.

What might happen when a Sunday School class had people in the background praying for the students and the teachers?

What could be accomplished if meetings of church leaders and committees were all covered in prayer, both before and during meetings?

What advance of the Kingdom of God would we see if each person in ministry, whether feeding the poor, evangelizing their neighbors, preaching, or visiting the sick was partnered with one or more intercessors?

Think of what could be accomplished, and then pursue these Moses/Joshua relationships, as led by the Holy Spirit!

Note the Moses Work and the Joshua Work:

This article is adapted and modified for online use from a chapter from the upcoming re-issue of “Prayer that Shapes the Future” by Rev. Brad Long and Rev. Doug McMurry.  It’ll be in the PRMI Store when it’s ready.

To learn more about the work of intercession, take our free 10 session Dunamis Video course on prayer.

Rev. Dr. Brad Long provides a little training for intercessors based on the Moses and Joshua Work from a training he gave in 2011. In the video, he refers to the Dunamis Video course on prayer.