The Dunamis Institute is now launched!

In 2009-2010, the Lord spoke clearly to us in our discernment process, telling us what He was calling us to do to be a part of His work of advancing the Gospel of Jesus Christ all over the world.

In the midst of this guidance was the call to build an even more effective means of equipping Christians in the power of the Holy Spirit for the purpose of fulfilling the great commission of witnessing to Jesus Christ. This has now been launched as the PRMI Dunamis Institute.

The chart below gives you a glimpse of the role of the Dunamis Institute (DI) as the means that we have been given to provide the equipping for each of our four vision initiatives of Prayer, Leadership Development, Growing the Church and Mission Outreach.

The DI does not replace the Dunamis Project but rather provides the means for the Dunamis teaching on the Holy Spirit to continue to reach all over the world. 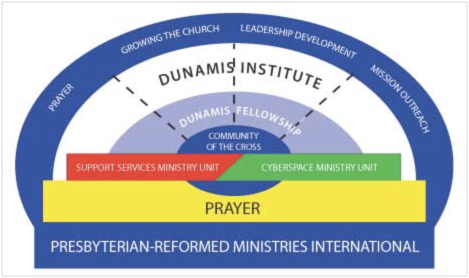 At the Dunamis Fellowship International Annual meeting in Black Mountain, North Carolina January 25-29th, 2012, we experienced a major outpouring of the Holy Spirit. Over 50 people were commissioned to be members of the Dunamis Institute Faculty. They came from all over the world!

Tom Willcox, as President of the PRMI Board, first called up the leadership team for the Dunamis Institute.

As I was prayed for as the President of the Dunamis Institute, a wave of the Holy Spirit swept me up and the next thing I knew I was on the floor. I was intensely aware of Jesus Christ. I felt Him saying to me my role was just to trust Him as He was launching the Dunamis Institute and calling the Faculty. He wanted me out of the way so that others could step up into leadership. My role was as intercessor to keep the gates of Heaven open for the outpouring of the Holy Spirit.

Tom went on to pray for, and anoint, Cindy Strickler as Vice President and the Dean of Faculty, Paul Stokes from UK was anointed as Academic Dean, Jeanne Kraak as Registrar and Dean of Students and Gary Wybenga as Director of Fund and Partnership Development.

Cindy then called up the founding Faculty of the DI who were anointed and commissioned.

Every faculty member was named and over twenty of the founding faculty were physically present that night.

Judy Cook joined by Skype and was commissioned through the internet.

The final group called up was our Apprentice Teachers. All 21 were named and the five present were anointed and commissioned.

All through this I was on the floor wrapped in the love and overwhelming presence of Christ. It felt like a river was rushing through me and I saw the Dunamis Institute being the means of advancing the teaching on the Holy Spirit around the world.

I saw millions of Christians from every nation empowered by the Holy Spirit to be effective witnesses to Jesus Christ. 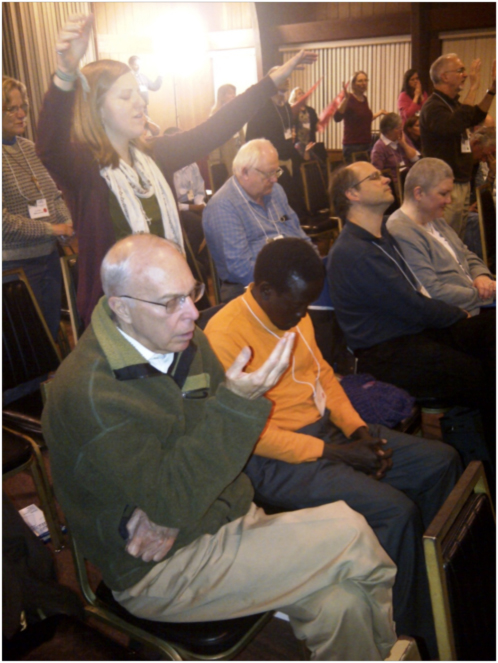 Finally the Lord told me that He was finished with me there on the floor. I started to get up with every intention of joining the group and all the fun of anointing the just established Faculty. But the Lord said, “NO! That is not your job. You must go and stand in the corner as intercessor, providing cover for the whole process.”

Feeling wretched that I had been put on the sidelines, but happy to see my co-workers so anointed and moving in the authority of the Jesus, I obeyed and went to the wall as intercessor.

After the faculty and apprentice teachers were anointed, Tom and Cindy called everyone present to get into small groups to pray about their particular roles in the DI and to pray for empowerment to enter into these roles.

Some present will be functioning as intercessors, others will be called to join as teachers, others as support people (in administration, internet use and supporting the students who will take courses through the DI).

The Holy Spirit continued to move in power in these small groups.

Finally, Tom and Cindy called the whole group to form a circle that extended almost to the walls of the large room. I was allowed to join the circle and just listened as prayers were offered for the Dunamis Institute.

The anointing for leadership was on Tom and Cindy, then suddenly, the anointed shifted to me, and the Lord said, “Now, call them all to come into the center and let me fill up this new ministry container for my glory.”

I called them all into the center of the room, and as we went into the center, God honored our obedience and surrender to Him, and poured out the Holy Spirit. It was just like Pentecost!!!

The next hour was just glorious with many manifestations of the Holy Spirit.

There are no words to really describe what this was like except that Jesus was present and glorified and there was now something more taking place than the anointing of Individuals.

The new ministry container of the Dunamis Institute was being filled with the Holy Spirit and now the ministry of equipping was set in motion.

What is the significance of such an outpouring of the Holy Spirit?

While we were all greatly blessed by this amazing experience, why does this actually matter?

For an answer I go to Jonathan Edwards who said that the Kingdom of God advances by successive waves of the Holy Spirit.

This is actually the pattern of God’s working in the book of Acts.

The first outpouring was in Jerusalem at Pentecost.

This was followed by other outpourings: Philip with the Samaritans , Peter in the home of Cornelius, and later in Chapter 19 while Paul was in Ephesus there was another outpouring of the Holy Spirit.

These waves or outpourings of the Holy Spirit have continued to take place throughout history, and they advance the Kingdom of God, by bringing people into the purposes of God and empowering and equipping them to fulfill these purposes.

In the short history of this ministry we have experienced a number of such outpourings.

For instance, in 1991 at our first Dunamis Project at Lake George, New York, where Archer Torrey and I did the teaching on the Gateways to Empowered Ministry and the Holy Spirit was poured out.

It is amazing to look back and recognize that from that moment this particular movement of the Holy Spirit has gone worldwide and touched thousands of people.

Most amazingly it is those who were at that first Dunamis event who were filled with the Holy Spirit who have provided the leadership over the last 20 years for this ministry.

Just to name a few:

Now with this new outpouring of the Holy Spirit filling the Dunamis Institute, we are ready to move forward in the next phase of advancing the Kingdom of God.