Two PRMI Board members, Mary Sterenberg and Martin Boardman,  are also ordained pastors in the CRC.  We asked them to share their reflections on recent events in the CRC.

We begin with Mary Sterenberg:

When I was growing up in the Christian Reformed Church as a teen in the 70’s, dancing was strictly prohibited. It was believed to be an evil that would lead to other “things.”

This year, in 2013, the Christian Reformed Church is learning to dance the dance of cooperation with the Holy Spirit. 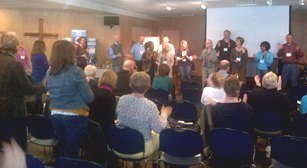 Growing the Church event in Michigan

March 10-15, 2013,  160 Reformed church leaders gathered along the shores of Lake Michigan to learn about “Growing the Church in the Power of the Holy Spirit.”

The content came from a book carrying the same title, by Brad Long, Cindy Strickler, and Paul Stokes. This conference literally had us “dancing” as worship leader Jeremy Simpson taught us to move our old non-dancing feet to Bethel Church’s song, “Deep cries out.”

Many participants have returned to their home churches continuing to dance.

I have heard many church leaders who are starting new prayer ministries, who are meeting together to pray and strategize how to move forward in the power of the Holy Spirit as churches, as Classes, and as a denomination. Many of the small groups formed at the conference are continuing to meet monthly for encouragement and coaching.

The Growing the Church 2013 conference was a cooperative effort of PRMI, the RCA and the CRC. There were church leaders in attendance from Michigan, Texas, New Mexico, Washington, Canada, and elsewhere across the U.S. One pastor shared testimony of feeling that he was reunited with his denomination after 41 years of feeling ostracized for being a “Reformed Charismatic.” He feels accepted and loved now for who he is, for how the Lord made him to be.

Others are overjoyed to find fresh new anointing in the power of the Holy Spirit that has impacted every area of their lives.

The next month, the dance with the Holy Spirit continued, as about 500 Christian Reformed Church leaders and members gathered for the second denominational Prayer Summit at All Nations Church near Los Angeles, California, April 15-17.

Our Korean brothers and sisters in Christ graciously hosted us again as we came to learn more about prayer and how our Spirit-led prayers shape and grow the Kingdom of God. It was a glorious time to worship, pray, rejoice together in hearing stories of God’s Kingdom work, and fellowship with one another in true Christian koinonia.

Brad Long from PRMI led us in steps of the dance, as he taught us to cooperate with the Holy Spirit in prayer that births vision, teaching from his book Prayer that Shapes the Future. The Holy Spirit was poured out upon us in power, giving visions to some, gifts of the Spirit to others, encouragement to many, even affirming and verifying visions already received. Many who attended the workshop and the conference are forever changed.

2013 may very well be the year the Christian Reformed denomination is forever changed and empowered by the Holy Spirit for the Kingdom work of the Lord Jesus Christ. In 1973, the CRC Synod approved the full cooperation with the gifts and power of the Holy Spirit, but in practice, this was not fully realized. Exactly 40 years later, could it be our wilderness wandering is over as we now eagerly embrace and dance with the Third Person of the Trinity, our dance partner, leader and guide? 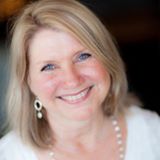 The Rev. Mary Sterenberg is a  Commissioned Pastor of Prayer and Spirituality in the Christian Reformed Church and a member of the PRMI Board of Directors.

In praying ahead of time for the Prayer Summit I had received a picture of the Lord standing in front of the church and calling out people to come to him and I had a sense of the Lord’s desire to awaken people to step into a new depth of their relationship with the Lord in prayer.

This expectation from the Lord was experienced during the summit as the Lord drew people onto the dance floor, embraced by his love, empowered by the Holy Spirit, encouraged by the stories of how God had answered prayers in the past and equipped with a vision and a passion to be a people of prayer.

The workshop on “Prayer that Shapes the Future”, led by Brad was a powerful time as the Holy Spirit touched many people giving them new vision for their journey with him, restoring vision that had been neglected, forgotten or given up on and then giving direction for the next steps that need to be taken. The Spirit was poured out upon people to provide the empowerment and the spiritual gifts needed in order to be able to begin to take those next steps.

As the Summit drew to a close there was a significant move of the Spirit, which followed the powerful testimony of a church planter who shared her many answers to prayer within her community. As she concluded she split the sanctuary in half and had one half pray blessing into the other half and then the groups switched. This was a powerful time of the church blessing the church and getting them ready to go out on their knees.

The Summit was a wonderful mountain top experience but now the task of returning to the valley must take place. The image of the attendees leaving the Summit each carrying a small flame to take back to their congregations was shared at the end of the conference along with the prayer that this would ignite a powerful wave of grassroots prayer in the denomination itself. Joel Boot the executive director for the CRC closed by saying…

“Let’s make it our prayer that this will be our legacy, that we are members of a denomination that has been brought to its knees and that we will spend the rest of our lives on our knees.”
— Rev. Joel Boot

The Rev. Martin Boardman pastors a CRC church in Brooks, AB Canada and is a member of the PRMI Board of Directors.