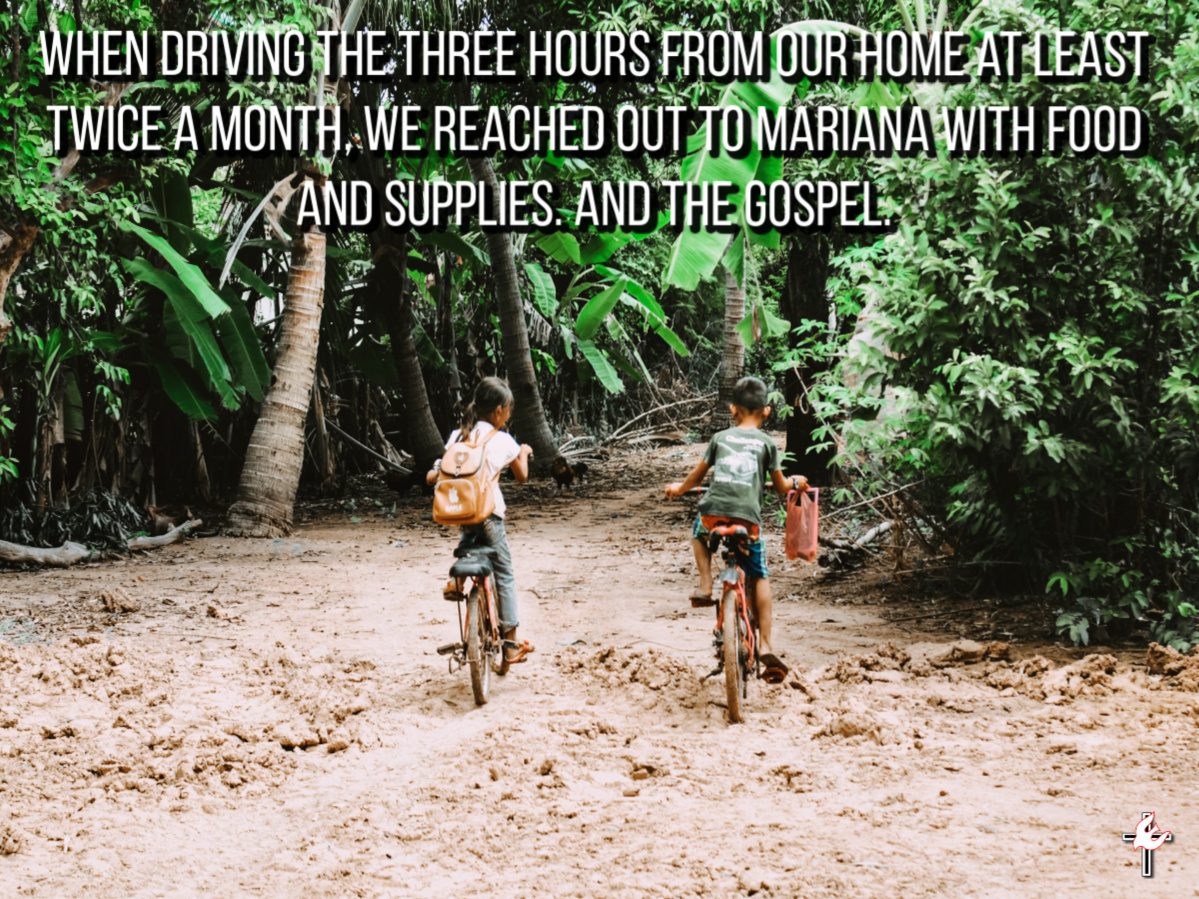 In Nicaragua we saw the power of the Holy Spirit we learned about through PRMI at work in the life of a widow who came to faith in Jesus.

Toucans flying in the skies.

Gorgeous flowers in bloom all around in the isolated jungle community of Mombachito in central Nicaragua.

Not for some people. Especially not for Mariana Lopez.

Mariana is losing her vision. She is hard of hearing. She doesn’t remember the date she was born. Mariana lives in a tiny shack with a dirt floor. Most of the time she lies in the dark, on a thin cot.

Her deceased husband had been the former witch doctor in their community.

She has no family members in Mombachito.

Mariana lives alone but a neighbor helps with her daily care.

The Holy Spirit Leads the Believer

Kelly is a kindergarten teacher at the Nicaragua Christian Academy International in Managua.

When driving the three hours from their home in Managua to Mombachito at least twice a month, the Solanos have reached out to Mariana with food and supplies. And the Gospel.

They have often engaged in conversations about God.

But every time when the name of Jesus was mentioned, Mariana became mute and completely shut down unable to talk further.

The Solanos believed she was perhaps spiritually oppressed, making her mind and heart blind to the healing touch of the Lord.

In the Solano’s August 2017 newsletter, they told the story of Mariana and included her picture.

They asked for prayers for her and the moving of the Holy Spirit to work in her heart.

When my wife Carol and I received the newsletter, we committed to pray for Mariana.

And visit her on our next trip to Nicaragua.

The more we learned about the power of the Holy Spirit while attending several conferences held by Presbyterian Reformed Ministries International (PRMI), the more we felt that perhaps Mariana was bound by an evil spirit; especially since her husband was a witch doctor.

The Holy Spirit Calls a Team

Backed by a dedicated group of prayer warriors from Lee St. Christian Reformed Church and our family and friends, we left for a trip to Nicaragua on January 22nd, 2020.

Five days later Jairo drove us from Managua to Mombachito.

We were joined on our trip by another couple of missionaries from Resonate Global Mission, Jesse and Jari Rodriquez, who also asked their supporting churches to pray for the visit with Mariana.

Led by the Power of the Holy Spirit

During the trip to Mombachito, we stopped at the market for supplies in a city called Boaco, about an hour from the destination.

During that time, we prayed and asked the Lord for discernment. We prayed specifically that Mariana would not become mute at the mention of the name of Jesus.

That she would become a child of the Lord.

The mile hike through the jungle to her place had become more rugged than expected.

Carol and I both fell hard on the steep trail, but amazingly we were not injured.

We came to Mariana’s tiny home.

We again all prayed for Mariana and for the Holy Spirit to give direction and the words to use.

We stepped inside and Jairo introduced us to Mariana.

She was thin and obviously in frail health. Our team presented her with a warm blanket for use during the cool nights and some sweet bread.

When We Bend on Our Knees Before God

Jari, who was born in Nicaragua, then got on her knees and moved closer to Mariana so she could hear better.

Mariana asked Jari if she could place her hands on the Bible.

We were all waiting and praying as Jari spoke the name Jesucristo (Jesus Christ) in the scripture passage. And tell Mariana how He loves her so much that he died on the cross for her.

Mariana did not go mute.

She let Jari continue to explain that Jesus loves her.

Jari then explained that Jesus is the way to salvation.

As Jari continued speaking, she repeated the words of confession and acceptance as Jesus as her Savior.

Carol and Jari prayed over her and anointed her with oil. I presented her with a tiny wooden cross representing what Jesus had done for her.

She kept feeling it in her hands while saying “La Cruz, La Cruz,” the Spanish word for the cross.

God’s Word and Holy Spirit broke the chains of the enemy who was holding Mariana captive.

She is now set free. Mariana is truly a child of the Lord. Thank you, Jesus, for answering the prayers of your people.

Afterwards Carol and I along with Jari, Jesse and Jairo wept sweet tears of joy.

We gave all the glory to the Father, the Son and Holy Spirit.

Jairo plans to follow up with her on future visits and will baptize her. We will continue to pray for Mariana; for God’s angels to protect her and that she will be discipled and grow in her faith.

PRMI Helped Us Cooperate with the Holy Spirit

Through this miraculous healing in a far-away jungle in Nicaragua and the teachings about the Holy Spirit offered by PRMI, Carol and I have grown in our faith and experienced the awesome work of the blowing of the Holy Spirit in our lives. And in the lives of others such as Mariana.

Jesus invites us to participate in His healing ministry in the power of the Holy Spirit.

You may want to go much further in your understanding of how to cooperate with the Holy Spirit in healing ministry.

Come and take part in what God is doing!