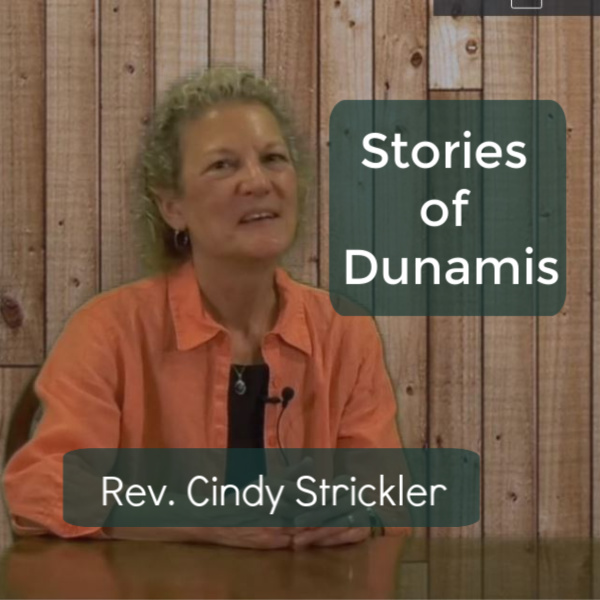 In our Stories of Dunamis series, you’ll learn how people discovered the Dunamis Project, what they learned, and the impact that the Dunamis Project teaching has had on their ministry. Rev. Cindy Strickler was at the very first Dunamis Project in Lake George, New York, and in this interview with Rev. Chris Walker, Cindy recounts her story.

My husband and I actually were at the very, very first Dunamis, the first one that happened in February of 1991 in Lake George.

But my mom had been to an event. She was on the mailing list and received a brochure about this thing called Gateways, the Dunamis Project. My mom and dad decided to offer to all their daughters the opportunity to go to Dunamis, and they would watch the children.

It was a gift. It was a Christmas present. And my husband and I were the only ones who said yes.

Steve and I were both pastors. I worked in a hospital as a chaplain, he as a pastor for church.

We had no time to read any of the materials before we got in the car and started the five-hour trip up to Lake George.

It was in the car that we started reading what we were supposed to have done in preparation, and reading the schedule.

It had topics like being filled with the Spirit and the trinity, and can you pray in tongues today?

I said to Steve:

“These are charismatics. I didn’t know this was going to be a charismatic conference. I thought this was just a spiritual renewal thing for the weekend.”

Although we’d had some bad experience in the past with charismatics we still went. I said,

“You know what, we’re away from David (our infant son) for five days, mom and dad have him, we’re going to be off in the woods, if it’s really weird, we can go for long walks and at least we’re together.”

We decided we’re in.

When we got there, what we found was people who weren’t too weird.

There was an integrity about the teaching. It was systematic, it was biblical, and it met what Steve and I needed in terms of answering questions.

The worship was just powerful in terms of being spirit-filled, and just really spoke to our souls.

We experienced prayer ministry in small groups. It was an amazing time. People answered our questions. They drew us in.

What drew Cindy to that Dunamis Project?

One part was, “We can get away from our son for five days, who hasn’t slept in 18 months, which means we have not either.” It was a need for a physical break.

The other part was spiritually sensing that we need something more after 5 years of ministry.

I’d kind of hit the end of myself, doing this in my own power, my own strength. I’ve been doing it pretty well, but I don’t have anything else to give. I was going through the motions, and a lot of the joy was gone. It just wasn’t there anymore. I was effective, but there was something missing inside.

I think for Steve it was probably something very similar. He’s preaching. He is doing pastoral care and he’s doing all the things he’s supposed to be doing, but he was feeling empty on the inside.

I think that was not entirely voiced by us going up, but when we get there and were able to let down and be in that context, it was like, “Oh my gosh, there’s so much more.”

We got tools for knowing how to do that when we went back.

So it was a life-transforming experience for both of us.

How has this impacted your ministry?

It started to change things right away. I went back to the hospital where I worked as a chaplain.

People always want you to pray with them, that’s what they do when the chaplain comes in. In the past, I would just kind of launch into a prayer.

What I had learned at Dunamis was: listen and let the Holy Spirit guide you.

There was a staff person who was going in for surgery. She had a large lump on her leg and was terrified because everyone was convinced it was cancer.

She was going to not only lose the lump, but her leg. She was terribly frightened. She wanted a prayer before the surgery.

I continued to pray, and I heard again the voice, and it’s not always this clear for me, but it certainly was then, “Tell her it’s not cancer.”

I thought, “Okay. I’m going to take a risk, I’m going to do this.” So, I said, “You know, as I’ve been praying, I’m hearing that it’s not cancer. And the Lord wants you to know that before you go into surgery.”

As I said those words, you could just see God’s peace fall on her. The terror was gone from her eyes. The Spirit was present bringing the peace of Jesus Christ to her.

We continued to pray that the surgeons would know what to do, and some of the things that I would normally have prayed.

She went off to surgery and, sure enough, it was not cancer. It was a really bad infection, she had to have IV antibiotics, there was a bunch of treatment, but it wasn’t cancer.

That experience I think confirmed for me that this stuff is real. It can be everyday. It’s not just for super Christians, like Brad Long or the teachers at Dunamis, but it’s for every single one of us.

As I began to walk that out, it just changed everything in terms of ministry. And has it been a complete journey like that? No.

What has it been like for Cindy since that first Dunamis Project?

There’s been ups and downs, and I need to remember and relearn stuff. But that core teaching has stayed with me.

I’m so grateful to PRMI and the Dunamis Project teaching because that’s the place where I learned it and that’s where I’ve been really trained up in it.

The Dunamis Project is the core teaching of PRMI.

In it, we are teaching people how to cooperate with the Holy Spirit so that you can do ministry wherever God has placed you.