A new but long-awaited initiative of PRMI to begin Dunamis retreats in South Sudan kicked off in January.

The team of Christian Zebley, Bill Server, and I (Frank Drake) gathered in Juba on January 30, awaiting a United Nations plane flight to Aweil.

We encountered our first snafu at the airport, when we were told that we were limited to 25 kg. of baggage, including our carry-ons. 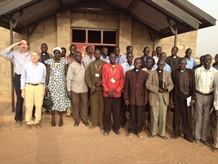 That meant we had to leave in Juba most of the paper copies of the materials we had prepared, to be transported (somehow) later to Aweil, an hour’s flight away.

But we ourselves arrived in Aweil just fine, about mid-afternoon on Thursday the 31st.

We began teaching that evening, with about 35 to 40 priests of the Episcopal Church of Sudan, who had been gathered by PRMI’s friend Bishop Abraham Nhial, who is Bishop of the Diocese of Aweil.

The first two days were given over primarily to Christian, who taught the priests how to set up and run an Alpha Course in their local congregations. Alpha is an Anglican-birthed evangelistic program that has met unqualified success in many countries. South Sudan, when Alpha courses begin there, will be the 170th country to have Alpha.

Part of Alpha is an introduction to the person and work of the Holy Spirit, an excellent lead-in for the Gateways Dunamis, which lays the foundation for learning how to cooperate with the Holy Spirit in empowered ministry, whose ultimate goal is bearing witness to Jesus Christ.

Late on Saturday, the Dunamis training began, and continued for a couple of hours on Sunday afternoon, but then took up full time on Monday through Wednesday, and ended on Thursday, when we three left Aweil and flew back to Juba, the first leg of our return trip home to the States.

As is so often the case in Dunamis training in developing countries, people hear that there is training going on regarding the person and work of the Holy Spirit and begin to show up requesting healing prayer. Aweil was no exception.

Episcopal priests receive their certificate of training during the graduation service. From L-R in the background: Mr. Bill Server, Rev. Christian Zebley, Bishop Abraham Nhial and Rev. Frank Drake congratulate those who participated in the training.

It is a joy for me to do healing prayer ministry and involve the participants in Dunamis in that ministry. They can do intercessory prayer. They can lay hands on the person being prayed for. They can observe how we cooperate with the Holy Spirit by listening to the Spirit as we carry out the prayer ministry. And they can see how we involve the person being prayed for in that ministry by continuing to communicate with the person, seeking feedback concerning what the person is experiencing as we pray. As we left Aweil, the priests were excited about what they had heard and seen. A recent e-mail from Bishop Abraham says that they are still talking about what the Lord did there in their midst.

We hope to be able to return for Dunamis 2 (“In the Spirit’s Power”) in early September. The cost of this recent Gateways and Alpha training ran almost $15,000, including transportation, hotel costs, etc. for the three of us from the States, and including also money PRMI donated to the Episcopal Diocese of Aweil to help pay for the attendance of the priests, so additional funds will need to be raised for another trip.

A big blessing is that when I returned from Aweil to the capital city, Juba, I had the opportunity to speak with Archbishop Daniel of the Episcopal Church of the Sudan and offer to do Dunamis for the whole Episcopal denomination, or at least the part not far from Juba. That process is now under way, as Bishop Abraham will be speaking with Archbishop Daniel very soon. There are also some leads that might open up ministry for us with the Presbyterian Church in South Sudan as well.

We found the priests in Aweil wonderfully hospitable, spiritually hungry, wide open to the Holy Spirit, anxious to get written materials so they can take the teaching back to their churches, and wondering why it would take us so long (7 months) to come back. Warm relationships were formed and Christian, Bill, and I all had the sense that the Spirit of God is doing something special there.

South Sudan, the world’s newest nation (July 2011) is a very needy place. There is a good possibility that the Lord wants to use the Christian Church, filled with the Spirit, to be a major catalyst in uniting that country and spurring its development. We very much want to be available to Him to continue His ministry later this year. A huge “Thank you” to so many of you who remembered us in your prayers.