Report on Praying Thy Kingdom Come (2013)

On Wednesday November 13th through Sunday, the 17th (2013), a group of us gathered at the Community of the Cross for the “Father, Thy Kingdom Come” equipping event.

At this equipping event, the Holy Spirit took us on an amazing journey of both understanding and experiencing the full dynamic of engagement in advancing the Kingdom of God and overcoming demonic strongholds that Jesus invites us into by inviting us to pray Matthew 6:9-10.

We were caught up into two movements of the work Holy Spirit.

The first was to understand and connect with waves of the Holy Spirit in revival that God the Father has sent throughout history to advance the Gospel of Jesus Christ and to extend His Kingdom on earth. 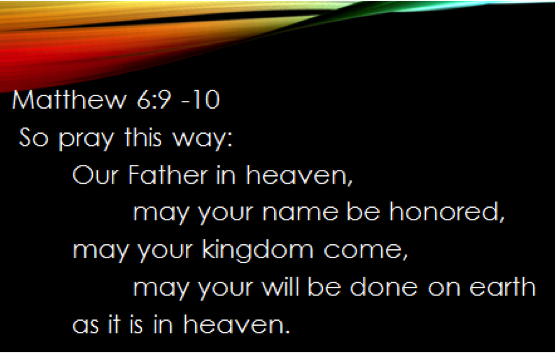 We have all prayed these words so often in the Lord’s Prayer that we have often lost their radical meaning and implications.

The second great movement, implied by Jesus when He tells us to pray “Thy Kingdom Come”, is that Satan’s kingdom must be pushed back, overcome, and the devil’s works destroyed.

This is the role of spiritual warfare and the recognition that waves of the Holy Spirit have been countered by “invasions” of demonic powers who work to build strongholds on earth to block the Kingdom of God.

The first movement was led through the teaching by Doug McMurry. He took us through 2000 years of history showing how waves of the Holy Spirit were sent by sovereign acts of God, but were welcomed and nurtured by intercessors. Each wave advanced the Kingdom.

(To see a summary of this teaching from the DFI meeting in January 2013, click here)

While a review of thousands of years of history may sound rather dull, when one grasps both the outlines as well as the details of how God actually works in the world it is immensely exciting. Doug’s detailed and masterfully reviewed history swept us up in the following principles of engagement in God’s present work.

“The teaching by Doug on the moving of the Holy Spirit through history was captivating! I felt like I was drinking from a fire hose, but I didn’t want to stop! There are such powerful witnesses to God’s work in the world throughout history and Doug brought them to light. I was often reminded of the scripture form Hebrews 12:1-2 ‘Therefore, since we are surrounded by so great a cloud of witnesses, let us also lay aside every weight, and sin which clings so closely, and let us run with endurance the race that is set before us, 2 looking to Jesus, the founder and perfecter of our faith, who for the joy that was set before him endured the cross, despising the shame, and is seated at the right hand of the throne of God’”. 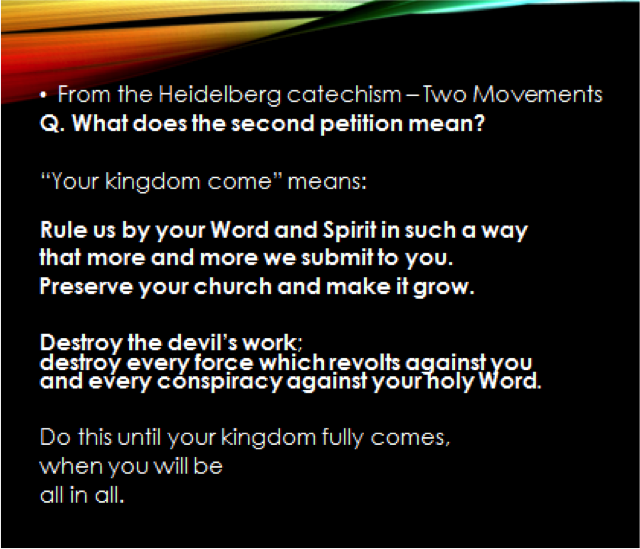 I (Brad) taught the second movement of this work of praying “Father, Thy Kingdom Come”. This leads us to the dynamic of spiritual warfare, as led and empowered by the Holy Spirit and in the authority of Jesus Christ, engaging demonic strongholds.

In this section we explored how Satan has relentlessly been at work in the world seeking to block the Kingdom of God and how Satan has built strongholds again and again in order to accomplish his evil intentions on earth.

As concrete examples , we delved into the structures of evil that you find in Nazism as well as Radical Islam. We chose these two strongholds because they are so related and also are the means Satan used in the past and is using presently to accomplish the following purposes:

I was able to share some details of how I, with others, was called into an engagement with the demonic stronghold of Radical Islam that coalesced around Osama Bin Laden. From this extended prayer battle we were able demonstrate some of the tactics that the Holy Spirit may call intercessors to use, for instance, breaking curses by “blessing those who curse you”, and many more.

We moved from this high level type of engagement directly to what many have experienced in their local congregations where strongholds of deception are being built that block the advancement of the Gospel and bring division and confusion. We focused especially on those situations where a “Jezebel Spirit” had built a stronghold in congregations.

This was a lot of teaching to pack into these few days, especially when we were also led to apply the teaching in prayer.

This work of prayer was done in times set apart for intercession for those areas where we see advancing waves of the Holy Spirit and demonic strongholds being built. These were amazing times of being led by the Holy Spirit to pray. They became practice times of listening to the Holy Spirit asking Him to reveal important aspects of the situation and how to pray.

While I cannot go into details, as much of this should not be made public, we did pray for those reporting in from locations in New York and Kentucky in the USA and in Caro, Egypt as well as meeting with a team who had just returned from China.

This was just amazing! We were using Skype so could see each other as we heard reports on the situations and then listened to the Holy Spirit as to what He is doing. We also prayed for the guidance of the Holy Spirit as to how to, and whether to, engage some of the demonic strongholds that were blocking the work in these areas.

All of this was incredibly exciting as we found ourselves sharing in God’s work. It was also physically and emotionally exhausting and would have been impossible to work through if it had not been for the whole event being wrapped in Spirit-led worship, facilitated by Jonathan Reuel. We were also well protected by on-site and off-site intercessors.

We concluded by praying for the gifts and power of the Holy Spirit to fulfill our different roles in this great drama of cooperating with the Father, Son and Holy Spirit in praying, “Thy Kingdom Come.”