2013 Prayer Summit: A Wave of the Holy Spirit in the CRC

There is truly a wave of the Holy Spirit taking place in the Christian Reformed Church that will not only bring effective growth and outreach in Canada and the USA, but will advance the Gospel worldwide.

Jonathan Edwards noted that any time God intends to greatly advance the Kingdom of God, He always starts by stirring people to extraordinary prayer.

On April 15- 17th, 2013, a remarkable meeting took place that I believe will be strategic for the advancement of the Kingdom of God worldwide.  This gathering of about 500 represented this “extraordinary prayer” that God is stirring up in this particular expression of His body, the Christian Reformed Church.

This prayer gathering was co-convened by Rev. Joel Boot, Executive Director of the Christian Reformed Church of North America and the Rev. Jin So Yoo, Pastor of All Nations Church, Lake View Terrace, California.  There were many sponsoring partners, which included various institutions and mission agencies of the CRC.

To have a group gather for three days from all over North America with denominational sponsorship was truly remarkable.  This was the second such gathering conducted at the All Nations Church.  The Korean Christian Reformed congregation provided logistical support for the conference such as programming, providing delicious Korean and American food for about 500 participants, shuttling participants to and from hotels, and serving in many other ways.  They also provided much prayer and spiritual support for this event to take place.

While there were many great speakers, excellent workshops and times of exalted worship, the overall purpose and focus was doing the work of prayer.  This was intercessory prayer for the Christian Reformed Church and for the advancement of the Gospel of Jesus Christ worldwide.  The speakers, starting with Dr. Richard Mouw, President of Fuller Theological Seminary, and a number of workshop leaders, were centered in Jesus Christ.

Prayer that Brings Revival has already started in the CRC 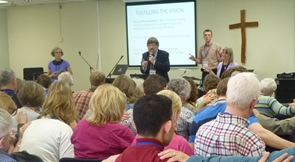 I was invited to teach a seminar on prayer that shapes the future, based on the book so named that Doug McMurry and I wrote.  Staff members Jeanne Kraak and Gary Wybenga went with me to take part.  Two PRMI Board members were there offering spiritual oversight, the Rev. Martin Boardman from Alberta, Canada and the Rev. Mary Sterenberg from Michigan.  Both PRMI Board members and the CRC provided intercession and leadership.

Also providing a workshop on prayer walking was the Rev. Tom Swieringa.  Tom, who in the past served on the PRMI board as well as PRMI ministry staff, continues to work in the CRC as a catalyst for renewal in the Holy Spirit especially through coaching and mentoring.

Frankly, I was overwhelmed and humbled at the large number of people in attendance who had been a part of PRMI’s Dunamis Project, Ignite, or Dunamis Video Courses.  PRMI’s engagement for over 20 years with so many people in the CRC has not been in vain but has truly equipped many for engagement in the Kingdom of God in the power of the Holy Spirit.

The focus of my workshop was on the three phases of vision, conception, birthing and fulfillment, as the primary ways that God invites us to join with Him in shaping the future.  Rather than tell stories from my own life, as I love to do, I invited Rev. Mary Sterenberg to illustrate each phase from her own experience of conceiving, birthing and eventually fulfilling the Growing The Church in the Power of the Holy Spirit event for members of the CRC and the RCA that took place at Camp Geneva in Holland, MI in March of 2013.  There was great blessing at this event.  While prophetic vision sometimes foretells the future, most of the time these are occasions when the Holy Spirit invites us to cooperate with Him in creating the future for the advancement of the Kingdom of God.  [See Mary Sterenberg’s article about Growing the Church and the Prayer Summit]

The Holy Spirit led us wonderfully into a short time of talking about the principles but then into moving to prayer.  I was intensely aware of the Holy Spirit’s presence drawing large groups of people into engagement with Jesus Christ.

We first prayed for the Holy Spirit to come upon us giving prophetic vision and dreams.  (Acts 2:17-18)  We then went through three phases of prayer, asking to restore visions that may have been planted in us but have been quenched or lost, or to plant vision seeds in us of what He wants us to create.  After praying through these phases first individually and then in small groups,  we concluded this time by praying for the empowering work of the Holy Spirit so that we may be able to follow Jesus into the various areas that He is calling us.

At this point the Lord very clearly told me that this prayer for the empowering work of the Holy Spirit needed to come from the Prayer Summit leadership and not from me.  So, I invited the Rev. David Huizenga, and Rev. Mary Sterenberg to take over and lead this part of the prayer.  Jeanne was up there too!  I shifted to the role of intercessor.  As I did, David led first in a corporate prayer for the outpouring of the Holy Spirit.

There followed an amazing time of the moving of the Holy Spirit.  He was giving the gifts and guidance for stepping into the work of God.  There were many precious things that happened.  One was praying for healing for those who had in the past set out to follow Christ but had been met with obstacles or had been called into time in the wilderness. There were many tears.

We will, of course, need to assess the fruit to discern what all the Holy Spirit was actually doing.  But it certainly seemed from looking on, and from the many reports that I have already heard, that God was truly bringing many into deeper levels of cooperating with him in creating the future by advancing the Kingdom of God.

I invite everyone to pray for the Christian Reformed Church.  From what I have seen they are truly part of the vanguard of the Kingdom of God on earth.  Presbyterian-Reformed Ministries International is committed to supporting this move of the Holy Spirit in every way that we can but most especially through prayer.

If you are being called to the work of intercession for them or if you are part of the CRC and have a real burden for your denomination, please let us know and we will put you in touch with Mary Sterenberg who is working with CRC Home Missions for the work of prayer.

For me, as a member of the PC(USA) I looked on with a heart aching for the PC(USA) to have a similar clear focus on Jesus Christ and such a wide open embrace of the Holy Spirit, all grounded  and rooted in the Bible as the Word of God.   Rather than talking about prayer they actually prayed!  Rather than celebrating diversity they exalted Jesus Christ and found true diversity. Rather than talk about social justice they prayed with passion and faith in the name of Jesus Christ that, “God the Father’s Kingdom would come on earth as it is in Heaven.” Most encouraging to me is the warm embrace of the work of the Holy Spirit with only two conditions that we all need to submit to: that it be consistent with what is taught in Scripture, and that it result in empowered witness to Jesus Christ alone.

Of course this denomination is not perfect!  And of course they have their controversies, but what I saw convinced me beyond doubt that unlike the PC(USA) and a host of other increasingly liberal denominations, the priorities are consistent with God’s intentions for the world, and that they will be able take part in the work of transforming the world according to the Word of God rather than accommodating to it.

I came away from this time encouraged about the future of this denomination and even more motivated to get the Dunamis teaching out into the Church so that it can be used to fuel revival and advance the Kingdom of God.  We are excited about partnering with the CRC in this exciting work.