The recent Dunamis Project 3: The Power of Prayer in Tukwila, WA was a special time with the Lord and there was a sense of community and camaraderie among those present that deepened all week. Each day began with many of the attendees participating in morning prayer – a time to listen to the Lord and prepare for the day, but also a time to receive from Him.

Everyone (including a 10-year-old from Portland) eagerly participated in the exercises as they practiced the principles that where being given in the teaching. Philip Noordmans and Mary Ellen Conners did the teaching on prayer and Rich Deruiter taught the Gateways makeup sessions. The local team and teachers, led by Nick Krantz, Sandy Doss and Steve Scheibe modeled team discernment and leadership in the evenings.

The team was led to rearrange the schedule a bit – Friday night the Lord led into a time of corporate commissioning, then Saturday afternoon the entire group joined those who were in the Gateways makeup to hear again about how to be filled with the Holy Spirit.

There was then a time of prayer for empowerment – some specifically asked for prayer to be filled with the Holy Spirit, some asked for gifts for intercession and others asked for gifts needed to fulfill the visions God had given them (following the teaching on vision that morning). We saw the Lord move among us in powerful ways.

In the evening, we talked about how to take this teaching back to local churches, then moved into intercession for those churches. At one point, we became aware that there were quite a few young people present, so we moved into prayer for them. Then, in a moving experience, the young people (those under 25) prayed for the rest of the group. It was a time of great love and encouragement as they prayed blessings and thanked God for those who have parented and mentored them. There was a sense of the generations standing together, acknowledging each others gifting, and joining together to run the race set before us.

We ended by celebrating communion, being strengthened for the journey, as we prepared to return to the places to which God has called us. Blessed be the Lord.

A week later, in Guelph, Ontario, flags were waved in worship and intercession as God’s love, comfort and empowerment were poured out at the Ontario Dunamis Project. Some people received vision for ministry, others were released into more freedom in their prayer, still others were encouraged and refreshed as they prayed and received prayer. 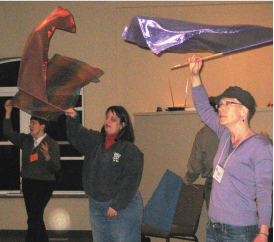 While studying The Power of Prayer, those attending moved beyond listening to teaching on the subject to listening to the Holy Spirit for direction as they prayed.

“I learned something new” said one man who was already an active intercessor. “I know now to ask the Holy Spirit to show me how to pray before I start praying. I tried it and he showed me specific things to pray about that I would not have thought of myself. It’s exciting to pray this way!” The Lord is here!

The Ontario Dunamis Project continues to grow. The next event in the series of equipping events, The Healing Ministry of Jesus Christ, will be offered at the same location, Guelph Bible Conference Center, in November.