Have you ever come into a sanctuary and become depressed at how dead or how cold it felt?

Do you know a congregation which used to enjoy a vital, growing witness to Jesus Christ, but now years later seems empty both of people as well as the presence of the Lord? Instead of warmth you feel a coldness and even hostility to Jesus Christ whose presence appears to be marked by nothing more than the dusty stained glass windows? 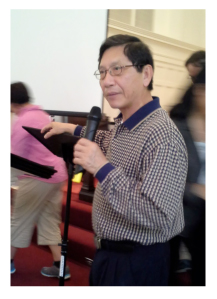 The Rev. Dr. John Chang, Pastor of the Grace Community Church in Staten Island and Flushing, New York. John has a deep commitment to seeing the Reformed Church in America growing in Jesus Christ.

Well, that is the way the ministry team experienced a certain church building in Queens, NY where the Chinese Dunamis Project on Spiritual Warfare was to held in early September.

The building, owned by a long established Reformed congregation, is where John Chang’s congregation (Grace Community Church in Flushing) is meeting on Sunday evenings.

Now the building is home to a small, aging congregation.

The church rents out the building for Yoga classes and other groups including John’s congregation, which helps to pay for upkeep.

Members of John’s congregation told us that that leading worship there is very difficult, that the place just does not feel welcoming of their evangelical faith.

This church building seemed a very bad choice for a congregation on fire for Jesus like John’s.

But John has a passion for advancing the Gospel and a love of the Reformed Church. Thus he is committed to staying in the RCA.

So he decided to move the site of the Chinese Dunamis project from the Winfield Reformed Church (WRC), where we met for the first 4 events, as well as the previous Dunamis Track.  WRC has become a thriving congregation while we offered the Dunamis events there.

John hopes that this new site could also be reclaimed for Jesus Christ.

The present pastor is obviously a man of deep Christian faith and commitment. He shared with me some of the history of the church.

The details we need not go into here, but it was obvious that many doors had been opened to welcome demonic spirits to build a stronghold of resistance to the very faith that the Church is called to live and proclaim. Among these open doors was the tragic case of one of their former pastors having committed suicide. 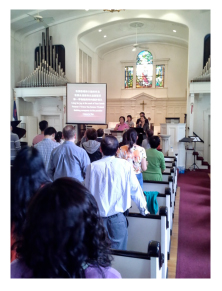 This lovely sanctuary built in 1925 had a coldness and the feeling of actual resistance to Jesus Christ. By the guidance of the Holy Spirit we were led to pray that Jesus’ manifest presence would overcome the demonic stronghold that had over the decade been built there, blocking the congregation from experiencing the presence of Jesus Christ and the preaching of the Word of God.

The final night of the conference I did a brief teaching on the nature of strongholds and how Jesus calls us to work with Him to overcome them.

(This is the last part our Dunamis Project on Spiritual Warfare) I expected that the Lord might call us into prayer for the volatile situation in the Middle East.

But the Holy Spirit had other work for us to do right here at home: we were to engage the stronghold that had been formed in that congregation and church building designed to block the Gospel of Jesus Christ in this part of New York.

As we moved into this, I explained that this would primarily be the work of John Chang and the other pastors there who were members of the RCA classis.

I also discerned that the Holy Spirit was going to work through everyone present regardless of their church membership. Their role was to provide prayer support by allowing the Holy Spirit to pray through them as in Romans 8:26 and also to follow Jesus’ directions by agreeing together in prayer.

As we launched into this prayer, I was immediately hit by a blast of resistance. I felt as if a cold wind was hitting me in the back. I suddenly felt nauseous and found it hard to breathe.

I felt as if I were being smothered by an invisible but tangible evil presence. I asked the team to lay hands on me to pray.

Afterwards, the oppression lifted enough for me to continue leading the battle. 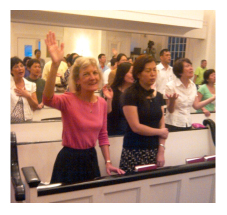 (L to R) The Rev. Cindy Strickler and Dr. Ji Dong Shan on the teaching team joining in the worship exalting Jesus Christ that broke the power of the demonic stronghold that was so oppressive.

We were led by the Holy Spirit to take a number of actions that are consistent with the practice of high level spiritual warfare.

For example, we were led to take authority over the church building so that we could seek forgiveness from our Father, as in representative repentance for past sins.

We also were led in the authority of the name of Jesus to break the power of the spirit of death that had been ushered in by the pastor’s suicide.

In the midst of all of this, the Rev. Mwo and the Rev. Chang, the leaders up front, spoke forth in both Chinese and English for the sake of the natural and also the supernatural entities present.

This battle in the heavenlies, also played out in that sanctuary , would take many pages to describe in detail.

Let it be said that the power of Father, Son and Holy Spirit was present. Our God superintended significant first steps to overcoming this demonic stronghold of oppressive evil.

We asked the Father to continue this important work in the power of the Holy Spirit to restore the church buildings to their proper purpose—to be filled with the Presence of the Lord Jesus Christ!

How do we know this is real and not just our imagination at work?

This presents a teaching moment.

How do we know that all this was not a product of our overwrought imaginations?

Was any of this objectively real? That is a good question, one that must always be asked. This is a very dangerous area to engage because it is very easy to be deceived.

At all PRMI events we are committed to teaching and practicing discernment. No different at this event. After the intense spiritual warfare, the group of Dunamis-equipped people naturally moved into a process of “debriefing.”

We always ask the following four questions of discernment:

1. Does what happened give glory to Jesus Christ?

2. Is what happened consistent with the Bible?

3. Do others who are filled with the Holy Spirit confirm the witness?

4. What is the objectively verifiable fruit of what happened?

We found that many had a confirming witness.

In fact, many people directly experienced the same oppression that I did.

The Rev. Mwo said, “When I was sitting out in the congregation, I felt completely peaceful but when I stepped up front to join the team, I suddenly felt a cold blast of spiritual power hit me in the back. I also felt a terrible pain in my back.”

Others had similar experiences. That this was real was also confirmed by the history—we learned there were indeed open doors to evil. It was not just the pastor’s suicide but the congregation at some point had been led to depart from biblical faith.

And, there is more which I won’t recount here.

Best of all were the immediate results.

When the evil spirits were commanded to leave, after a time of resistance mostly in the form of fear-inducing physical attacks, we could all feel a sudden shift take place in the atmosphere.

John felt a weight of oppression lift from him. The physical symptoms stopped and we all moved into a time of celebration and joy. Some saw visions of Jesus standing by the pulpit in glory.

The time of discernment was complete:

2. Yes, Jesus has authority and power over the demonic!

3. Everyone in the room knew what Jesus had accomplished.

4. The fruit was verified by all—the oppression was replaced by Jesus’ peace.

This battle is not over.

There is much more work to be done. But there was a decisive change!

This was confirmed on Sunday evening when the congregation returned for worship and found that there was no longer the cold atmosphere of hostility to worship and to the preaching of the Word of God.

This may be a hard question to ask, but we must all ask it of ourselves! What is the atmosphere of your church? Is it a place where there is warmth and life? Or, do you sense a form of resistance to the Lord Jesus and the work of the Holy Spirit?

Of course, it is best to begin with human dynamics, all of us are sinners, and some of us are all too competent at bringing our sin to bear on the whole congregation.

There is not a demon at work behind every human sin, and if there is, our confession of our sin removes the ground for the demonic to operate.

Still, in many cases Satan uses the unfortunate events of the past or outright false teaching in order to build a stronghold designed to block the congregation from her true purpose—to witness effectively to Jesus Christ and remain a place where everyone may experience His love, grace and truth.

If you suspect that there may be something more than human going on in your church, please consider the following:

Do not do this alone! Involve your church leadership. If you need any help in discerning what the roots of your congregation’s conflicts are, please contact us, and we will see how we can help.