Miracles of Healing in Indonesia

Receiving reports back from Hilary Clark and Frank Drake in Indonesia has been like reading sections from the Book of Acts.

After I finished the two weeks that I was called to be there, the team continued to offer Dunamis Project Equipping events to hundreds of pastors.

The miracles of the working of the Holy Spirit continued. The team members have reported experiencing a deeper anointing for empowered ministry than they have ever experienced before. 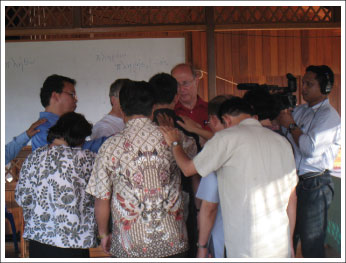 Frank Drake in prayer ministry with professors at the Seminary.

Frank has a great love for these people and the Holy Spirit works through this love to show the love of Jesus. 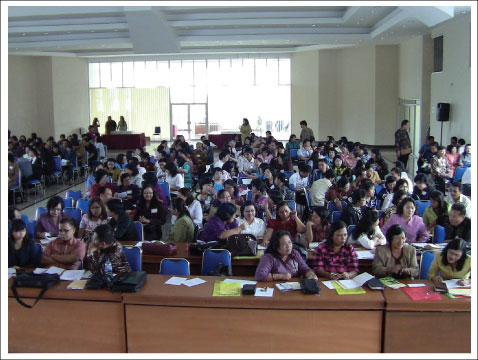 In this video Dr Brad Long shares an amazing miracle of healing healing that took place through Hilary Clark in Indonesia, as well as other ways PRMI is experiencing the work of God. He then shares the guidance that he just received about Satan’s big plans that are working not just against PRMI but against the church in USA, UK and Canada.

A group of about 300 pastors who are part of one Dunamis Track in this particular Reformed denomination in Minahasa, Indonesia.

Notice that a large percentage of these pastors are women. Except for China where over 60 % of the house church leaders are women, we have never seen a place where women share with men with such equality in the gifts and power of the Holy Spirit and in anointing for Christ-centered leadership.

An amazing miracle of healing

Hilary Clark from Yorkshire, England, a PRMI Board member and part of the leadership team of Dunamis Fellowship Britain & Ireland sent the following report. The context is actually after the Dunamis Equipping was completed and the members of the team went with the Indonesian pastors to visit their local congregations.

The Holy Spirit was moving very powerfully Sunday- many physical healings including an amazing miracle. I was at Pastor Rita’s country church -farmers and fishermen and housewives- when a young woman arrived hopping on one leg and leaning on a crutch. Two months ago she broke her leg in an accident, spent 48 hours in hospital -but the leg had not been set and she was sent home. (No money) Her mother had to look after her and her two young children. She was in a lot of pain. Her left leg was very misshapen and twisted and she could not stretch it out. There was a large bulge just above her left knee. Her left foot was suspended about 5 inches above the ground. She was also complaining of pain in her left hip.

As I prayed in the name of Jesus and placed my hand on her left hip the whole of her leg started to visibly tremble. On placing my hands on her leg just above the knee the trembling increased, she felt the bone move and her leg began to straighten out. She stood up, and her left foot was about 1-2 inches above the floor -so we asked God to lengthen her leg, making both legs the same. This he did and she was able to stand with both feet on the floor. There was now no difference between her legs -both straight! No pain. We left her praising and thanking God – she has an enormous grin on her face! Isn’t God amazing!

Manifestations of the Holy Spirit continued. Others felt the bones in their feet moving and left no longer in pain. Many said it felt like a furnace had been lit inside them. We prayed for about 35 people in all and over 75% said the pain had gone, and 100% received a blessing. Some asked for prayer for uterine tumours in and prolapsed. There were signs of the moving of the Holy Spirit in healing but we are still awaiting expectantly to hear what God has done. All reported feeling “lighter. This is such an encouragement to us all.”

The team has concluded their ministry in Indonesia. Friday they had further opportunities for prayer ministry and on Saturday they commissioned 300 pastors. On Sunday the team preached in various churches and made themselves available for prayer ministry. Please continue to cover them in prayer as they transition back home after this extraordinary experience.

This has been an altogether amazing mission trip. It is part of what God is doing worldwide to grow the church in the power of the Holy Spirit.