The Holy Spirit is working to equip and commission Korean pastors and church leaders to implement the Dunamis teaching in Korea through the Korea Dunamis Fellowship.

These leaders are being trained to use Dunamis materials, including some specially prepared in Korea, in their congregations. 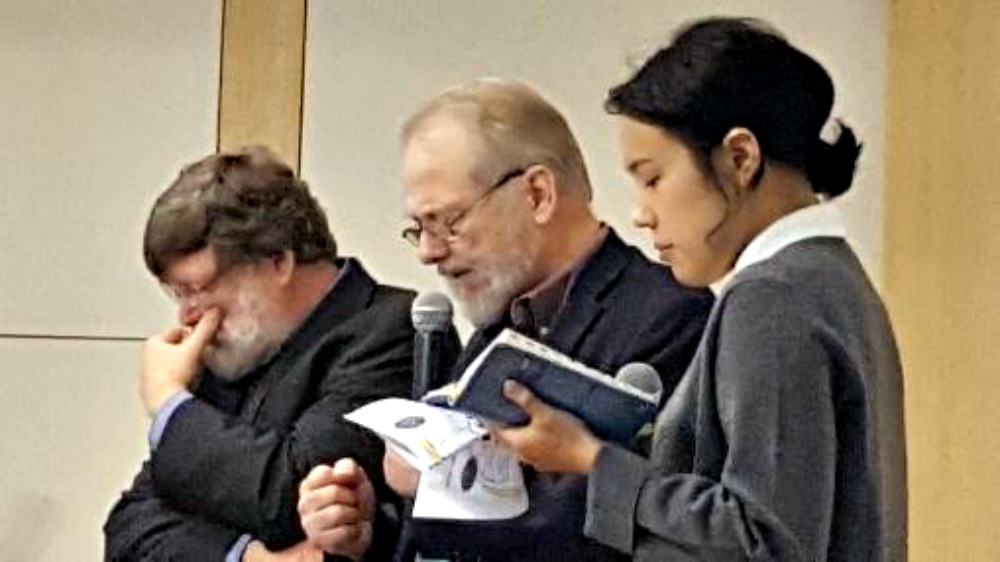 In many ways the Dunamis Project had its beginnings at Jesus Abbey in Taebaek, Kangwon Do, Korea.

It was there that Dr. Brad Long received the baptism of the Holy Spirit in 1975 under the guidance and through the prayers of Father Archer Torrey (Anglican Priest), founder of the Abbey.

In 1991, they both collaborated in launching the first Dunamis Track with Gateways to Empowered Ministry at Lake George, NY.  Jesus Abbey has been running week-long Holy Spirit seminars at least twice a year since the ’70s.

These seminars provided the core of the Gateways seminar.

Many years later Brad returned to Jesus Abbey with a team to bring back “home” much of the teaching that had been developed and broadened in the intervening years.

Subsequent to that, Archer’s son and Brad’s spiritual brother, Ben Torrey returned with his wife, Liz,  to the Abbey to pursue their new calling of preparing for the opening of North Korea.

In 2007, based at Jesus Abbey, Ben began the process of bringing the full Dunamis Track to Korea for the Korean Church.

The first Gateways seminar was held with a team from the US and the beginnings of a Korean team at the Hallelujah Church in Bundang south of Seoul, Korea in March 2008.

From that beginning, with an 18-month advanced training track covering all six seminars at Jesus Abbey in 2009-2010 to provide a solid foundation for development, the Korea Dunamis Network (KDN) grew. 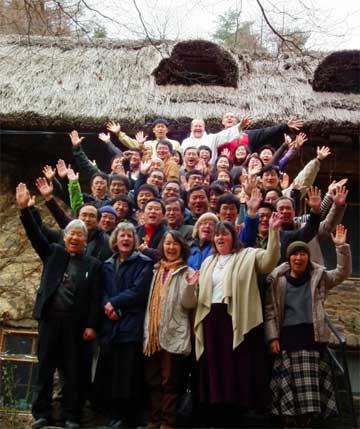 Graduates and teachers of the Advanced Teacher Training Course, on the steps of Jesus Abbey, Nov. 19, 2010

There is a repeated centrally located national track that focuses on pastoral leaders from churches around the country and local tracks in several parts of the country where the seminars are provided for lay members by interdenominational teams of local clergy.

Korean Dunamis Network also developed a publishing wing that has published all track manuals and other materials in Korean.

The start of Korean Dunamis Fellowship

With this growing foundation, the first non-English-speaking regional expression, Dunamis Fellowship Korea (DFK), was launched in March, 2015–just 7 years after the first Gateways seminar as the Korea Dunamis Network came of age. 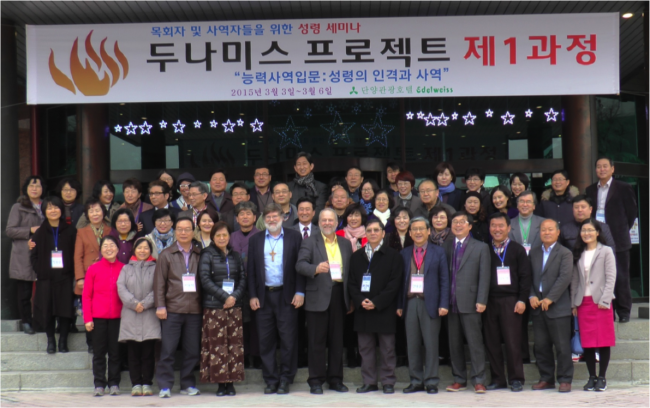 For 2016, in addition to the ongoing Gateways (Dunamis Project 1) and In the Spirit’s Power (Dunamis Project 2) seminars offered each spring and summer, we brought Growing the Church in the Power of the Holy Spirit to Korea in the fall.

This was received with great enthusiasm.

The Saturday before the seminar, we held a special one-day event in partnership with All Nations Intercessors (aniprayer.org) to call high level intercessors in preparation for Mountain Top Equipping Event in 2017.