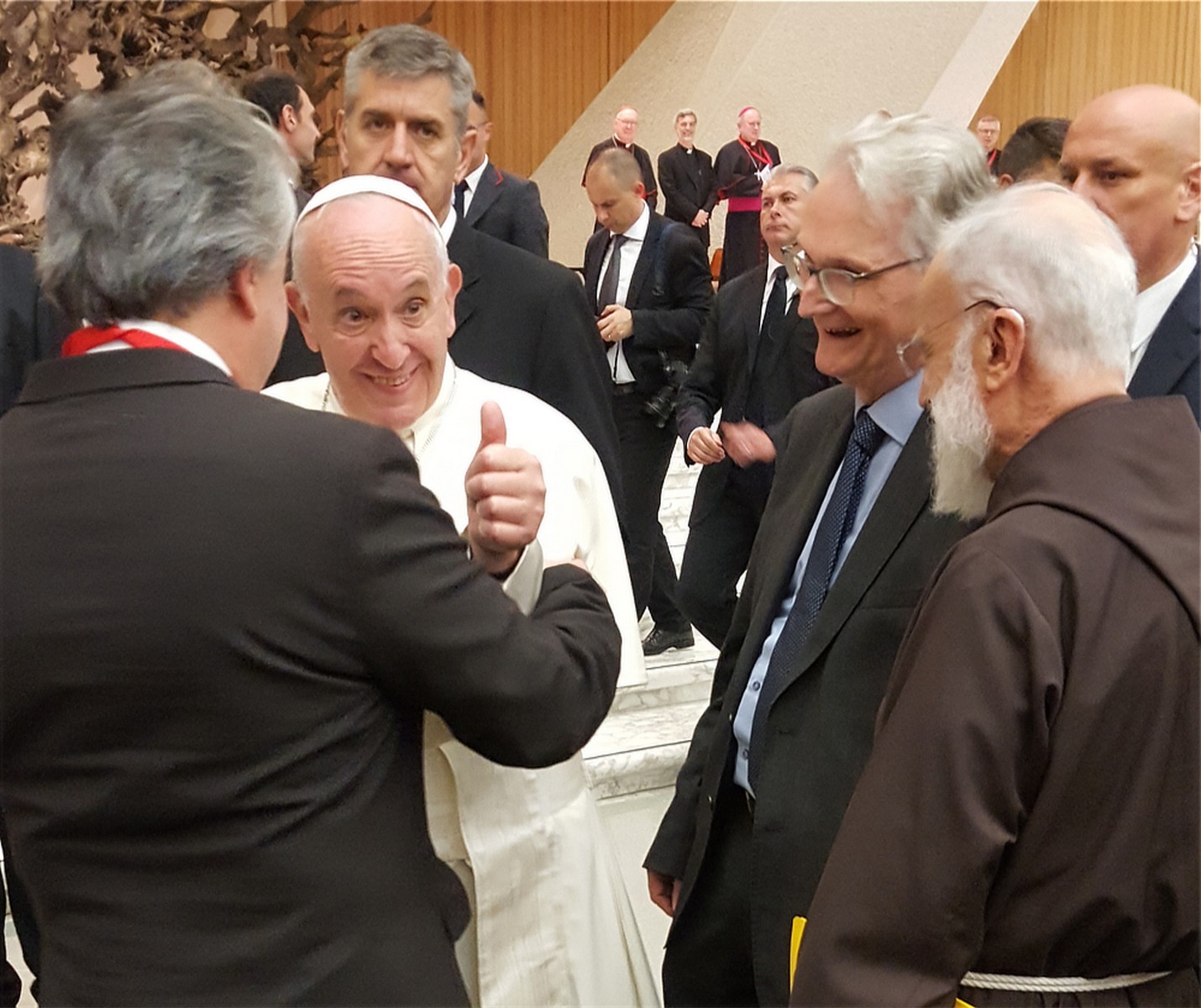 Pentecost weekend was a momentous occasion for the Catholic Charismatic Renewal Movement as the Roman Catholic Church celebrated the birth of its new, global service for supporting expressions of charismatic ministry.

There was a great surprise during the trip!

A delegation from PRMI attended the event as honoured guests (pictured L-R below):

We were able to bring greetings to CHARIS on behalf of PRMI. (Technically we can now say that we have spoken in the 9,000 seater Paul VI Conference Hall!)

We met the Pope!

We only realised the extent of our ‘honoured guest’ status on the final morning when we were ushered to the front seats and given tickets stating “Meeting with the Holy Father.”

In a congregation of some 7,500 people, we were among the 40 or so invited guests who had the privilege of shaking hands with the Pope and receiving a gift from him!

While it would be dangerously easy to boast about such an occasion, the truth is that we were simply ambassadors of PRMI, and this was an indication of the genuine warm-hearted ecumenical desire among the leaders of CHARIS.

One of the most remarkable features is this explicitly ecumenical purpose: “Recognizing Catholic Charismatic Renewal as part of an ecumenical current of grace, CHARIS is an instrument to promote and work for unity in the body of Christ, as expressed in the prayer of Jesus Christ (John 17).”

This is the second article in its statutes, underscoring the importance given to this aspect of its work.

How did PRMI connect with CHARIS?

The invitation came because of previous PRMI connections.

Ash Wednesday 2019, there were conversations between Brad Long and two of the chief exorcists in the Catholic Church, and Oreste Pesare the Director of ICCRS (International Catholic Charismatic Renewal services).

They presented Brad with the gift of a cross for the Prayer House at the Community of the Cross, and strategic mealtimes conversations all arranged by Fr. Gregory Gresko OSB.

At this CHARIS meeting, we reconnected with Oreste Pesare, who was thrilled to see us again.

Similarly we were delighted to meet again with Deacon Bartholomew Mercado (Greek Orthodox); with Charles and Sue Whitehead (who organise the annual Charismata gathering for ecumenical charismatic trans-local ministries in the UK); and Diana Ingle, who leads, Emotionally Free Prayer Counselling in New Zealand, member of the CHARIS leadership team.

All these are significant connections, because it is from these that new opportunities and partnerships can emerge.

The conference was similar in some ways to gatherings of our various Dunamis Fellowships, though the thoroughly global nature of CHARIS meant that all talks had to be interpreted into several other languages. Songs of worship tended to be mainly Spanish or English.

A series of presentations explained how this new organization is structured, and what the regional and national responsibilities are.

We prayed for the work. We attended Mass in St. Peter’s – perhaps the only tangible reminder that, despite the ecumenical intent, there are still genuine differences that are not being swept under the theological carpet.

But, as Pope Francis stated: it is no good waiting for the theologians to first get everything sorted out for unity, since that will only happen the day after Jesus returns!

The Pope urged us, in the meantime, to find ways of working together in partnership with whatever mission the Holy Spirit is doing.

(Others also used this language describing the Holy Spirit’s activity as “a current of grace” – a river with many streams and tributaries.)

Pope Francis declared: “This is what I ask of you. To share the baptism of the Holy Spirit with all the church.”

CHARIS exists as a service to the church, and its focus is on:

“Baptism in the Holy Spirit, involving a personal encounter with Jesus Christ as Savior, an openness to the Word of God, to expressing the charisms and to evangelization…”

They are establishing a Formation Program – a pattern of withdrawal-and-return – equipping leaders for cooperating with the Holy Spirit.

The current plans are for:

These are not identical to the Dunamis Projects, but do have significant areas of common focus. And they are primarily for people with a measure of local leadership responsibility.

Things they said at CHARIS…

It is difficult to do justice to the many presentations over these days, but some notable quotations can give a flavour of themes that stood out for us:

Other memorable moments at CHARIS…

At the conclusion of the event, as we expressed our gratitude to Fr. Etienne Vetö for the gracious invitation, he replied,

“We are so thankful and pleased that you have come.”

This was echoed by Oreste Pesare, who added,

“It has been great to have you in Vatican with us. Such a joy to know and rejoice with all of you. Let us remain one in prayer, and in contact.”