Earlier this month I was asked to join many others in urgent prayers for LeeAnn Crumbley who was going into surgery. I was then given word that she had died December 17, 2013. She was 76.

When I received this news, I thought back to when I made my very first visit to Alaska as Executive Director of PRMI, in 1990. I was met by LeeAnn and Jack Crumbley. They welcomed me into their home. They told me all about how the Holy Spirit was moving in Alaska.

LeeAnn was an anointed spiritual leader in the movement of the Holy Spirit taking place not just in Alaska but worldwide. When we held the first Dunamis Track at Victory Bible Camp, LeeAnn and Jack would drive me to the airport to catch the 1 am Delta flight back to the lower 48. There was always gracious hospitably as well as penetrating and lively discussions about what God is doing.

She always had an authority about her as that of a teacher and a school principal. When I was in Elementary School I always seemed to get into trouble because of my dyslexia and other learning disabilities. Countless times my exasperated teachers sent me to the principal’s office. LeeAnn’s school principal self always intimidated me a little bit.

Over the years, I got over it! I gained a deep appreciation of the leadership gifts she exercised at our PRMI events in Alaska. Then she was called to serve on the PRMI Board of Directors where she served as Secretary of the Board.

It was there in that context of intensely listening to the Holy Spirit to receive and discern His guidance that I came to see most clearly her wonderful personality used of the Lord. I saw her razor sharp mind, her deep faith in Jesus, and her ability to connect with people all come together. She was on the Board at the crucial transition time when we obtained the land and established the ministry at the Community of the Cross. She was there when we launched the Dunamis Fellowship International and expanded Dunamis Equipping events in the USA, England and other places around the world.

Below are several of my favorite pictures of LeeAnn that provide some glimpses into her personality but also reflect the contributions she made in advancing the Kingdom of God through PRMI. 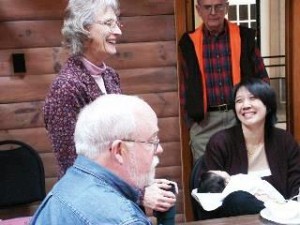 I love this picture of LeeAnn and Louisa Evans from London, England (holding her new baby) connecting. Board member Reid Henson is in the background with Bill Emrich in the front.

I do not remember what they were talking about but these two sisters were really enjoying each other’s company. Just like LeeAnn! It may have had something to do with LeeAnn, mother of two, relating to this new mother. 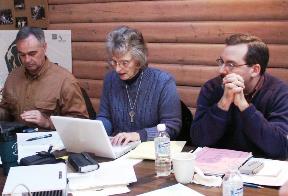 At a Board Meeting

In this next picture we see LeeAnn in her role as Secretary to the PRMI Board. This this may not look very exciting, but for a Board to function well it must have an good Secretary and it was here that LeeAnn brought a great gift to PRMI. She was excellent! Astute and able to grasp as well as write down what was being discussed.

On the left is Denny Finnegan and on the right is Steve Thayer, Vice President of the Board. It was at this meeting where we developed and approved the master plan for the Community of the Cross.

This last picture reveals more than anything to me LeeAnn’s heart and her faith. It epitomizes for me her deep devotion to her God, Father, Son and Holy Spirit. Here she is joined by Mike Schrowang, President of the Board, in prayer. This was not just a business meeting. It was a prayer meeting!

It was here that LeeAnn provided great leadership. She was a woman of God who listened to the Holy Spirit. She brought gifts of discernment as well as administration to help implement what the Lord was speaking to us about.

As we are looking toward the future at this turning point of 2013 into 2014, we grieve the loss of this friend and co-worker in the Lord. We are however deeply thankful for her life and ministry. She helped build the foundations upon which we are now continuing into the future to follow Jesus Christ as He leads more deeply into the great worldwide river of the Holy Spirit.

We give thanks that the one whose birth we celebrate this Christmas was born to die on a cross to conquer death. Yes, brothers and sisters, LeeAnn’s life and death were not in vain. In Jesus she lived and died. May we rejoice with her in Jesus’ victory over death. May we continue to labor in the Father’s vineyard so that we may remain in Jesus Christ until finally, like LeeAnn , we enter the Kingdom of God which is forever and abundant beyond measure!