Map of China and Taiwan

In February of 1975, when I was baptized with the Holy Spirit at Jesus Abbey, located in South Korea, I was caught up in visions of seeing the Gospel of Jesus Christ going all over the Chinese world in the power of the Holy Spirit.

The first fulfillment of these visions came in August,1980 when Laura and I, carrying our four- month-old Elizabeth, stepped off the airplane in Taipei, Taiwan, into the heat and humidity that felt like a steaming hot blanket. That began our missionary service in Taiwan.

We were there until August of 1989 when we returned to the USA, now with Elizabeth 9 years old, Rebecca 6 and Stephen 2. That time in Taiwan was the beginning of an amazing journey of me participating in the movement of the Holy Spirit in the Chinese world that was briefly interrupted in 1990 when I became Executive Director of PRMI. But, within a couple years, the doors started to open again back to Taiwan and to China.

Then a year ago, a vision was given of a way to start thousands of Dunamis Equipping Schools in China. The fulfillment of this vision has now begun to move forward in earnest with the launching of the first Dunamis Track in Taichung, Taiwan. This has the potential to grow into an equipping center for teachers for Taiwan as well as mainland China. 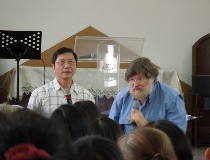 The team for the event in Taichung included me (Brad Long), Cindy Strickler and Mary Ellen Conners from North Carolina, John Chang, Jidong Shan, Eddie Lee and Mina Cheng from New York, and Charity Chen, a pastor in Taiwan.

John, Cindy and I were the teaching team. Mary Ellen partnered with Charity to provide equipping for a very eager group of intercessors. Eddie also assisted with intercession while Mina videotaped the event.

Jidong did much of the pre-work for the event – translating the manual and power point slides. She also served as translator for Cindy, while Charity translated for Mary Ellen and John translated for me. 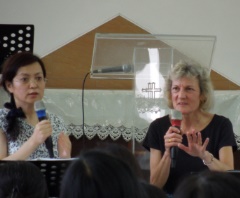 For the team from the USA, the heat (it was in the 90’s) and extremely high humidity plus jet lag and starting right away with no sleep or rest, required deep dependence on the Lord. I know for myself I do not remember ever being so tired as I stepped into teaching. I was delighted and frankly surprised at the way the Holy Spirit moved through us in such power and also gave such clear direction as to what to teach and how.

Much of the credit for this buoyancy of stepping into the river of God and being swept along into ministry belongs to the very hard work of the intercessory prayer teams. (Besides the onsite team, about 20 others from PRMI prayed offsite in their own locations).

After getting to bed about 3 am on Wednesday May 29th, Mary Ellen started teaching an eager group of intercessors at 10:30am. The rest of the team started with a church full of pastors and church leaders at 2:30pm. We started systemically teaching through the Gateways to Empowered Ministry: Introduction to the Person and Work of the Holy Spirit.

The evening sessions were open to the public and 120-150 people came each night.

Some highlights of the moving of the Holy Spirit

On Wednesday night we taught on the Holy Spirit and the Great Commission and the Holy Spirit was poured out. We were all caught up for a very long time in singing in the Spirit and offering exalted praise to Jesus Christ. Then a series of visions were given that directed our intercessory prayer for the pastors gathered there, as well as for the congregations represented. 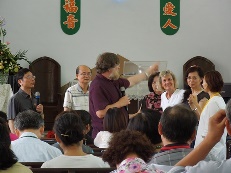 John Chang and Pastor Wang look on as attendees participate in a demonstration of how the Trinity connects with us.

All day Thursday and Friday we taught through the Gateways teaching. As we did, the lights started coming on for people about what it means to be filled with the Holy Spirit. Thursday night we experienced a very quiet but very deep time of inner healing and restoration and forgiveness.

On Friday night we thought we would share some testimonies and do some more teaching on how to be filled with the Holy Spirit. But as we moved into worship, the Holy Spirit fell on the whole group and we were led into an extended period of intercession for those who are outside of the faith. We saw visions of the Holy Spirit going into each of the temples and touching hearts and setting people free from bondage to idols. 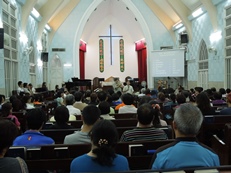 60 to 80 attended sessions during the day

On Saturday we spent the morning debriefing what had happened the night before and concluded the teaching on the biblical and Reformed theological framework for understanding the work of the Holy Spirit.

Mina Cheng and Eddie Lee worked behind the scenes

Believe me, after the intensity of that event we were all ready to take a rest on Sunday. But that was not to be. Cindy, John and I were each scheduled to preach in different churches that Sunday. Cindy went with Eddie Lee to a small dynamic congregation where she preached on the Acts passage about Peter and John healing the lame man at the Beautiful gate. This was followed with Cindy laying hands on a number of people and seeing Jesus move in power in ministering his healing.

John Chang and Jidong Shan went off to another Presbyterian Church that had been the mother church of a number of congregations in Taichung but had been devastated by poor leadership and left with greatly diminished numbers. They were greatly encouraged by John’s empowered, as well as Christ-centered, preaching. We are finding that around the world wherever Jesus Christ is not preached, the church withers and dies!

I was invited to preach at the Zhongxiao Road Presbyterian Church where we had conducted the Dunamis event. I had to do three sermons, one completely in Mandarin Chinese and the other two translated from Mandarin and English into Taiwanese.

For all of us who were at the limits of endurance and exhausted by the heat and intensity of the past few days, we can attest that it was not us but Jesus who was at work and who gets the glory!

About two o’clock that afternoon we were all jolted by a level 6.3 earthquake. The buildings swayed and shook. We found out later that there had been some damage and five people killed just 30 minutes away from us. 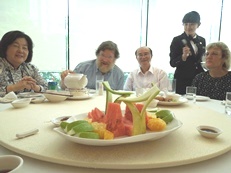 That evening, around an amazing feast, we met with the elders of the Zhongxiao Road Presbyterian Church and received their feedback. It was amazing! They all had been touched by the Holy Spirit and had grasped, and were most excited about, the basic contents of the Gateways teaching. They all affirmed that we needed to continue. We all witnessed to the reality that God had done a mighty work and that we needed to come back.

The next two days, Monday and Tuesday, were filled with meetings with pastors and church leaders in a city to the south, Tainan, and in Taipei. We had one feast after another and in both places felt that the doors were opening to us and that there is truly a new wave of the Holy Spirit starting in Taiwan. Where exactly it will take us I do not know! But we are committed to following Jesus Christ to the ends of the earth. That seems exactly where the Holy Spirit is taking us.

1. We need to continue to pray for financial provision for the China mission. We have almost used up the first major gift that has launched us. In Taiwan, when we announced our policy that we did not sell our materials to make money nor did we expect them to pay for our airfare or expenses or to even give us honorariums, they were amazed. All we asked is that they take up the offering and we would trust Jesus to cover the huge cost of the team coming over for the event. Right now we are sowing into this work in Taiwan and we ask you to pray for us to be able to do that. God has always been faithful to His promise of provision. Our role is to pray, obey and cast the vision.

2. Pray for wisdom about next steps. We have several invitations now from Taiwan and also have another door opening to us that may lead to Korea becoming a base to equip Chinese leaders.

3. Lastly we have massive work to do to prepare the teaching materials as well as video teaching that can be used in both Taiwan as well as in mainland China.

Thanks for your prayers! And Jesus Christ gets all the glory!