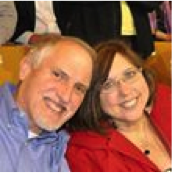 Pastors Allen and Debbie Kemp, of Father’s Place of Rest ministry in Hampton, VA returned to Kyrgyzstan in January reestablishing a Dunamis track in Bishkek and the Prayer Dunamis in Karakol.

Kyrgyzstan is located in Central Asia, due north of Afghanistan and Pakistan, and south of Kazakhstan and central Russia. It’s 80-90% Muslim with about 300 evangelical Christians in Karakol, a city of 75,000 people high up in the mountains near the western China border, and 4-6,000 Christians in Bishkek, the capital city of about a million people.

The country is seen as a “buffer zone” between Russia in the north and the radical Islam of Afghanistan to the south. In 1991 when the Iron Curtain fell the country opened up to the Gospel and many new churches were established. But the revival has waned in recent years, many believers have fallen away, churches have split, and attendance is only about 20% of what it was 20 years ago.

Kyrgyzstan is ripe for another revival, this time with mature, Spirit-empowered leadership. Christians in this part of the world are desperate for the love of the Father and power of the Holy Spirit as they have suffered so much under the harsh realities of atheistic communism and Islamic legalism.

We re-started Dunamis Bishkek because we had mostly new attendees after some local churches offered to sponsor the seminar and we were thrilled to have twice as many participants (80) as had been anticipated by the leadership. God’s Spirit repeatedly fell on the crowd with many, if not most, resting in the Spirit on the final day when we prayed for the infilling. Hearts were healed, forgiveness offered, Father’s love was poured out, and the church was built up.

One woman in particular, who came to us initially filled with confusion and anger over her difficult family life and who kept objecting to every suggestion we made during several prayer ministry times literally changed before our very eyes. Her heart opened to Father’s love and we witnessed her countenance change and joy take over her life. On the final day she was all smiles and gave us the biggest hugs to say goodbye. Many more were touched in ways we have yet to hear.

In Dunamis 3 in Karakol we had mostly returning students for teaching on prayer. We spent much time praying for the country, the city, and the issue of Islam and how it impacts families and government. There is serious concern about new laws being considered that could force the church underground in the near future.

For our last night, in prayer ministry Debbie was praying for a fresh anointing with the Holy Spirit. Many, if not most, rested in the Spirit, from the pastor and his wife to a man we had thought was demonized. Many broke out in laughter and great joy. Healing was flowing all through the room. Allen offered the prayer ministry of Father’s embrace, holding people and speaking words from Father of love and delight. Many wailed in great pain, releasing deep hurts and letting love flow into the inner recesses of their hearts previously closed off to love. Watching people’s faces go from deep hurt and distraught to freedom, love and joy was truly a privilege. The transformations were phenomenal.

We have two matters for prayer and discernment. The IFES Eurasia Director has shared that there is much interest in starting a third Dunamis track in Osh, a city on the Uzbekistan border to the south. Osh was wracked by a terrible ethnic war 4 years ago and most Christians fled. There appears to a kairos moment now to return and bring the message of Father’s love and the empowering work of the Spirit to the churches. Radical Islam is much more prevalent in Osh and Christians are frequently persecuted. One pastor from there who attended our Bishkek Dunamis shared that the society is so desperately broken and hurting that entire families leave there to join ISIS in Syria. Pray that we will discern if God is calling us there in September.

Second, we eagerly desire to bring one of the pastors here to the USA or Canada to experience the big picture of Dunamis and how prayer undergirds all we do. We’d love for him to attend 1-2 Dunamis tracks, sitting in on the leadership team meetings. His English is improving (he is Russian) and he is ready to come. We need funding of about $3000 to do this. This pastor has been the key person, in addition to the IFES Eurasia staff director, to the success of Dunamis in Kyrgyzstan.