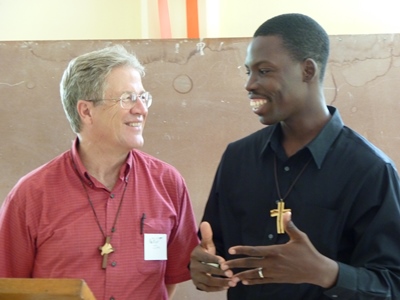 I first met Pastor Jon DeBruyn in November, 1999. We were at a Spiritual Warfare Dunamis at Maranatha Bible and Missionary Conference in Muskegon, Michigan.

Jon was part of the team that prayed for my deliverance. The Lord used that prayer time to change my life. Glory to God!

Jon DeBruyn and Sadoni Leon – partnering in leadership in Haiti

For nearly two decades Jon served in a leadership role with Michigan Dunamis projects—first in Muskegon, then at Lake Ann, and these last few years in Traverse City.

On Saturday, June 22, after nine months of cancer, Jon went to be with Jesus. He will be greatly missed by his wife, children, grandchildren, and many loved ones including his Dunamis friends.

In the last 10 years, Jon devoted much time to bringing Dunamis to Haiti.

I and many other North American team members greatly appreciated the overall leadership of Margie VanMeter and Jon’s consistent presence too.

He was the spiritual leader of the first Haiti Dunamis track in partnership with the Haiti Episcopal Church, which was completed a couple of years ago. (The second track began in February, 2012.) Our Haitian brothers and sisters will miss Jon very much.

For years, Jon, as a Christian Reformed Church pastor, encouraged parishioners to pray, conducted prayer seminars throughout the US, led many prayer groups, and in these last years directed Prayer Missions International, which he launched as a prayer ministry to bless fellow believers worldwide.

At his memorial service this past Thursday, Jon’s love for the Lord, dedication to the work of prayer, desire that Christians would live in the inward and outward work of the Holy Spirit, and passion to have people know and follow Jesus, was evident. His life and death brought glory to His Heavenly Father, which was of most importance to Jon DeBruyn, a man of prayer.