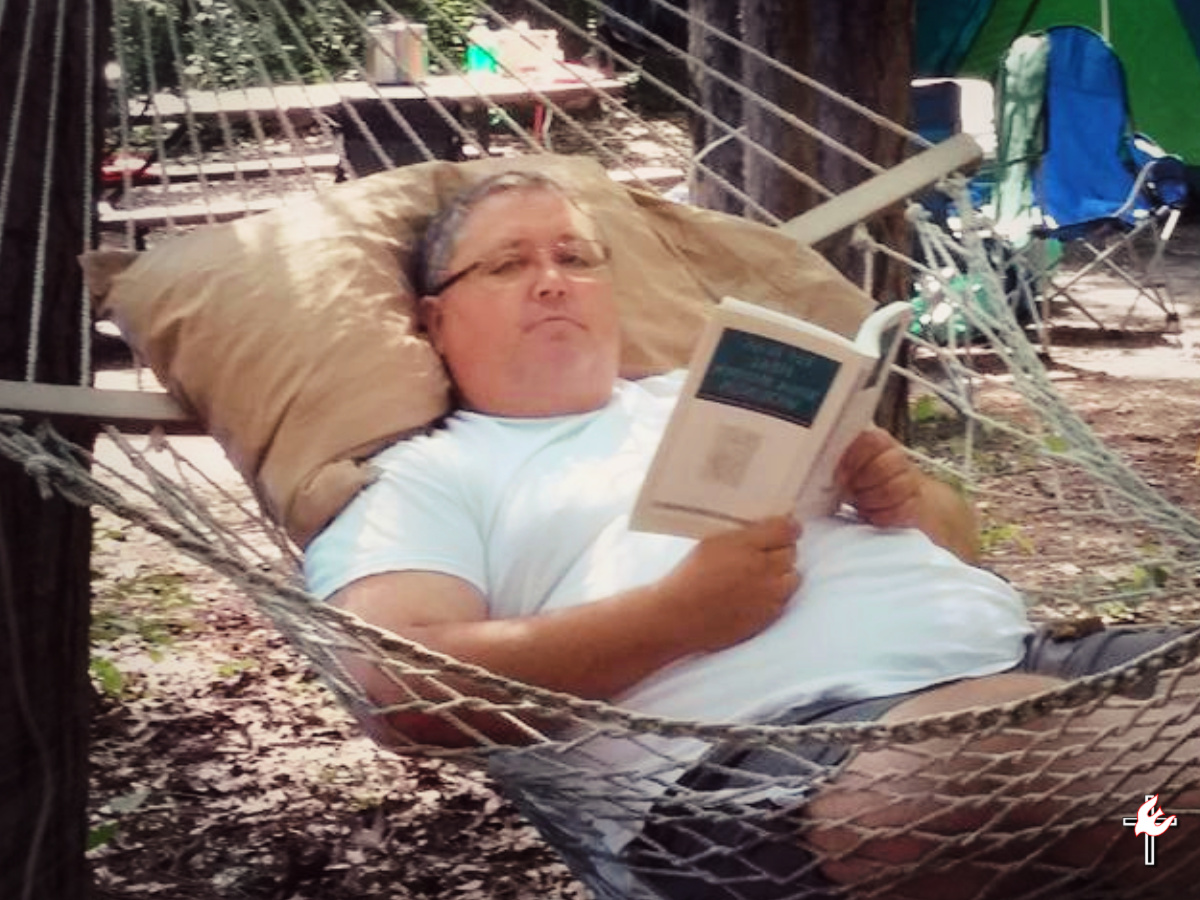 Our friend and brother in Christ, Ron Sharpe, now peacefully rests with our Lord.

His mom’s cooking and baking skills were passed on to her children. Ron loved to cook, bbq and could make the best pies and bread.  He enjoyed playing sports, especially playing first base in baseball and as goalie in ball hockey with the “Boys Brigade”.

He has so many fond memories of all the boys of Pictou who forever remained in his heart.

After obtaining his Bachelor in Business from Acadia University, Nova Scotia, Ron wanted to be an accountant and drive a Porsche.

Despite this, Ron could not ignore the call God had placed on his life since at the age of 15.  He had preached his first sermon and was called into ministry.

Ron graduated from Knox College with his Masters of Divinity. As a student he served in Vankounet, Listowel and Alvinston. During his summer in Alvinston he met his wife Kirsty.

Together they ministered in Mount Brydges, Welland, Whycocomagh, and Windsor, Ontario.

In the development of Dunamis Fellowship Canada, Ron was an important participant.

How Friends Will Remember Ron Sharpe

The quotes below are sourced from social media accounts:

“Ron walked in the ministry of presence, whether leading a Dunamis track in Guelph or cooking for our teens at Upward Challenge. He was a key leader and intercessor for our global ministry.”

Ron’s keen sense of humor, words of encouragement, his outspoken passion for truth, and his huge spirit that filled the room just as his laugh filled our ears.

Ron loved to cook when he, Kristy, and their kids would come for Upward Challenge. You can taste and feel the love in the food. They served with such love and humility and joy that is so easily seen by everyone around.

Ron doing what he loved at Upward Challenge- cooking awesome meals so that teenagers wouldn’t starve. Always an abundance mentality.

Even in his illness, it was a thrill to see him serving as Upward Challenge’s cook, and PRAYER WARRIOR.

He helped me stay sane in seminary. Without him and some others I probably would have dropped out in the first year.

His Christ light was so bright it shone into places I’m sure we are not even aware of. He brought God’s Kingdom everywhere with great passion. Ron was one of the most caring people and a great servant leader!

I will miss a partner in ministry. I remember during a prayer appointment I was stuck and called Ron into help. Blessed to have known him and love his family and praying for him. He was such a gentle spiritual giant in faith.

Ron was a great servant-leader, fantastic dad and mentor, prayer warrior, and one of the most caring people I’ve ever met. We will miss him so much at Upward Challenge!!

We prayed for advanced healing for him, but God has chosen to give him the ultimate healing.

Ron showed us how to live the Christian faith and face death with that same faith – see you at the Resurrection Brother!!!

Ron was a mentor in intercession for many. He was a good man and ideal role model for all our youth.

PRMI had been well represented to honor Ron and his family at his funeral on February 23, 2020 located in Windsor, Ontario.

Andy LaBo came from Michigan to the visitation on Sunday.

From Dunamis Fellowship Canada we had Janet and Pete Lammers, Melody Melzer, Les and Barb Ferrier.

“I honor and give thanks for his role as an anointed leader in the move of the Holy Spirit embodied in PRMI and the Dunamis Fellowship Canada.

Through Ron, the Lord planted seeds of the Kingdom of Jesus Christ, those seeds are already present and in the future will bear much fruit.

In this last battle on earth, Ron obeyed the Commander of the Lord’s Armies, who is the Resurrection and the Life.

The battle here is done! But the next glorious phase has just begun.

A great peace came upon us all.

Ron did not give up the fight! It was put completely in Jesus’ hands, who led Ron forward.”

His commitment to love, dedication and service transformed lives in and around the world.

Gifts in Honor of Ron

One option as listed in the obituary is to make a gift to the PRMI Prayer House that is being built at the Community of the Cross in Black Mountain North Carolina.

When you do, add a designation “In Memoriam of Ron Sharpe.”  Donors within the United States will be able to receive a tax receipt.