History of The Dunamis Project

Since 1991, the primary way that PRMI has been fulfilling its vision initiative of equipping spiritual leaders is through the Dunamis Project.

Following is a short history of the development of this equipping approach by Rev. Dr. Brad Long.

Founded in 1966, the original building at Jesus Abbey is now dwarfed by the large new buildings.

Thousands of guests go to the Abbey each year to share in the life of the community, pray, and receive teaching and ministry to grow in Jesus Christ.

The beginnings of the Dunamis Project go back to Brad Long’s own formative experiences from 1966 – 1975 at Jesus Abbey, which is an intentional prayer community in South Korea.

This place of prayer and equipping for Christian living was founded by Archer Torrey, the grandson of R. A. Torrey.  Archer founded the Abbey as a laboratory in which to grow in intimacy with Jesus Christ, delve into the Word of God, learn to pray and be filled with the Holy Spirit.

In this context, I grew in my faith, received teaching on the Holy Spirit, and experienced firsthand a highly effective model for developing spiritual leaders and for equipping ordinary Christians through practical discipleship. The Dunamis Project seeks to utilize a number of the principles that I saw in operation at Jesus Abbey.

The Dunamis Project teaching on the Holy Spirit is based on the biblical teaching of R.A. Torrey.

Archer Torrey and Brad Long teaching together at Jesus Abbey in Korea.

Archer Torrey is the great-grandson of R. A. Torrey, who taught on the Holy Spirit from 1890 to 1910 in worldwide teaching missions igniting a movement of the Holy Spirit.

It was from R.A. Torrey, through Archer Torrey, that Brad received the teaching on the Holy Spirit that is both biblical and reformed.

Spiritual Formation through the Spiritual Exercises of St. Ignatius

In 1977, while Brad was serving at the Asbury Presbyterian Church, he and his wife Laura took an eight-day directed retreat in which participants used the spiritual exercises of St. Ignatius.

For Brad, this was a profound experience of encountering God.

This Jesuit model for spiritual formation has also contributed to the Dunamis Project.

From 1980 until 1989 Brad served as a Presbyterian missionary in Taiwan. 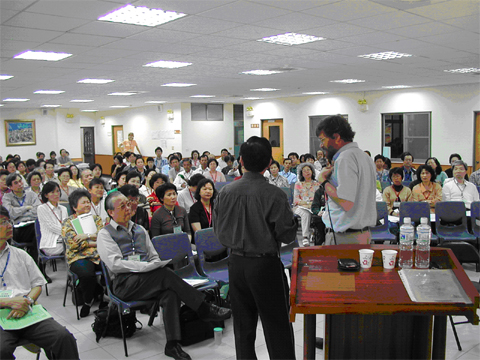 Pictured above, Brad teaches through the Dunamis Project at the Suang-Lien Presbyterian Church in Taipei, Taiwan.  He is teaching in Mandarin Chinese with John Chang translating into Taiwanese.

The teaching fits well in the formal classroom lecture setting, which suits the people in Taiwan with their high educational standards.

Upon his arrival in Taiwan, Brad says,

At the Lay Training Center and in revival meetings in different parts of Taiwan, Brad taught a series of courses on various aspects of the work of the Holy Spirit. He also put in place a special intensive training event called the “Christian Soldiers Training Camp.” (The name sounds a lot better in Chinese!)

All this took place in a Presbyterian and missionary context.

The fruit of this equipping was a fellowship of Taiwanese leaders who could provide leadership for the movement of the Holy Spirit in Taiwan.

It was in this very practical context of equipping leaders and intensive engagement in power ministry that Brad Long hammered out what has become the basic contents and form of the Dunamis Project.

The Call to PRMI and the Need for Leadership Development

In August 1989, upon returning to the United States to become Executive Director of PRMI, Brad became aware of a crisis in PRMI’s future.

The primary program of PRMI in those decades before his leadership had been the conferences in which there was a heavy reliance on well-known speakers who did the teaching and the ministry.

There was no program for systematic leadership development.

As these conference speakers aged, or for some reason had been taken out of leadership, PRMI and the movement that it embodied was beginning to face a leadership crisis.

During a period of intensive prayer in Montreat, North Carolina from August 1989 until January 1, 1990, God gave Brad a new vision for PRMI. This vision was shared with the Board of Directors and received their whole-hearted approval.

A central piece of this vision was that of leadership development for spiritual renewal and for the advancement of the Kingdom of God.

In May 1990, a team was called together to pray for guidance on how PRMI was to go about fulfilling the vision of leadership development. This original prayer team consisted of the following members:

It was 1990 Mother’s Day weekend in Oklahoma City, when Brad Long, Andy Buchanan and Carter Blaisdell gathered to consider an adult discipleship training course around the theme of the Holy Spirit.

Carter suggested Dunamis because he knew it was Greek word for divinely bestowed power, not the explosive kind that was invented later by a Norwegian.

Together they conceived and developed the overall design and contents for the Dunamis Project.

Doug McMurry and Brad Long, with editorial help from Archer Torrey, wrote the basic Gateways to Empowered Ministry manual in 1990. They also started work on the other manuals. They conceived the design and did some of the writing themselves, but other authors were also invited to contribute their areas of expertise.

Moving From Vision to Reality at Lake George, New York

They decided to launch in winter of 1991-1992 in the Upstate New York area, because PRMI had several churches who by then had had several Spirit Alives, and became our primary supporting churches.

PRMI launched 6 four-day (Wed. pm to Sunday noon) conferences with Archer Torrey and Brad leading the teaching.  Soon Bob Whitaker, if not at the first one, joined probably by the second one.    Two conferences a year were held, January and August, as I recall.

Brad remembers the launch of the Dunamis Project.

“The first series of retreats was launched at the Silver Bay YMCA Conference Center at Lake George, New York in March 1991.

My mentor and teacher on the Holy Spirit, Archer Torrey, shared with me and Doug McMurry in the teaching.

At that first event, the Holy Spirit was poured out and this new equipping movement was launched.” 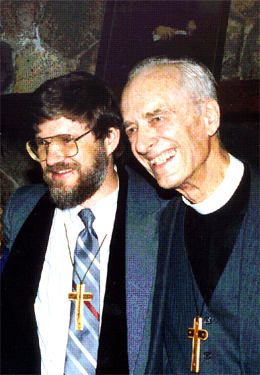 Brad Long with Archer Torrey at the founding of the Dunamis Project
at Silver Bay in 1991. They shared the teaching together.

From Lake George to a wave of the Holy Spirit

From these small beginnings, the Dunamis Project spread rapidly to a number of locations in Canada, USA, United Kingdom, Taiwan, Hong Kong, Uganda, Brazil, Latin America, Japan, Haiti, Indonesia and many other places around the world.

The Dunamis project is now the primary equipping process offered by PRMI and the Dunamis Fellowship.

Cindy Strickler was one of those filled with the Holy Spirit in the first Dunamis event at Silver Bay, NY in 1991.  She has since taught Dunamis throughout the US and in other countries around the world. 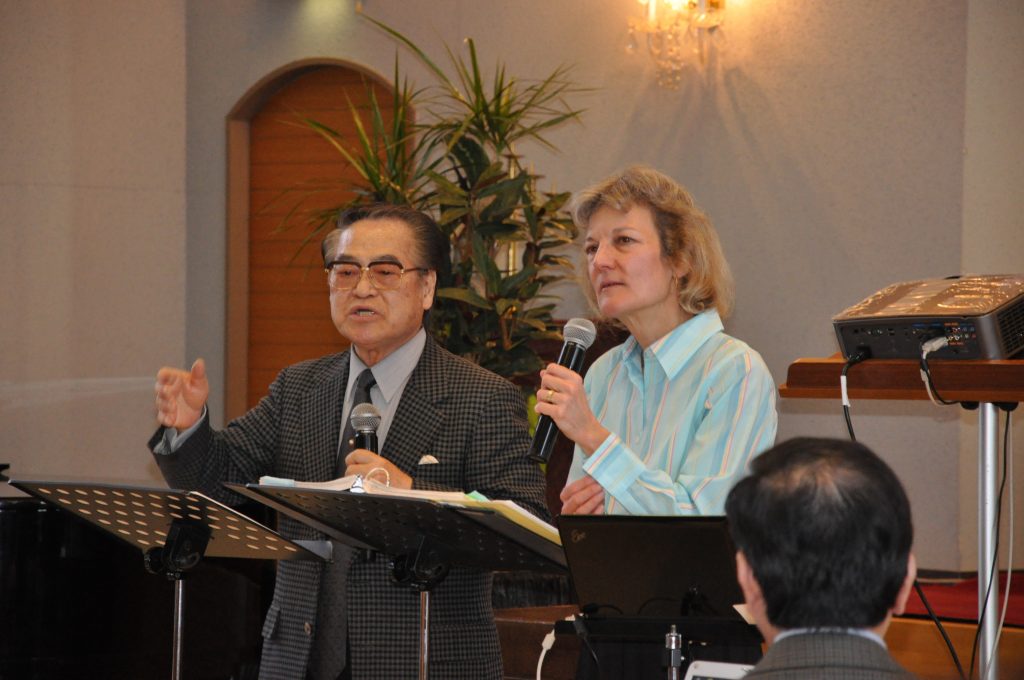 Hear a little of the history of the Dunamis Project

In this video from 2010, as part of equipping for a new generation of
Dunamis teachers, Brad shared some of the history

The Fruit of the Dunamis Project

Over the years, hundreds of pastors and thousands of lay people have been through the six equipping events in various parts of the world.

The fruit has been churches growing deeper in faith and in effective witness to Jesus Christ. There has also been the fruit of many lay people and pastors being called by God into Holy Spirit-empowered ministry that is grounded in scripture and takes part in the ongoing work of Jesus Christ as prophet, priest and king.

The teaching is biblical, theologically systematic and very practical. Because the teaching is basically biblical, and taught by teachers who are experienced in cooperating with and have a passion to follow the Holy Spirit, the Dunamis Project has been effective in many different cultural contexts. 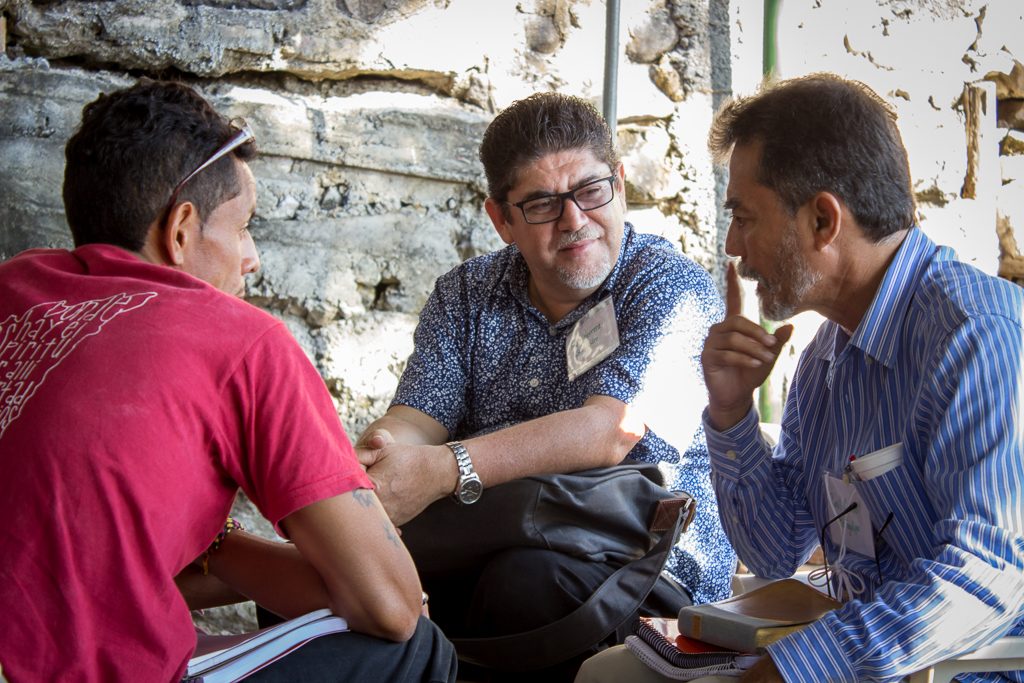 After years of teaching Dunamis principles to Young Life Central America, a full Dunamis Project has been established in  Nicaragua.  A second site is preparing for another track.

The Dunamis Project continues to spread around the world, equipping the church to advance the Kingdom of God.