Do you ever feel discouraged about working in cooperation with the Holy Spirit?

Looking back can help us see this work bearing fruit over time. It’s important to remember and give thanks for what God has done.

Kortright Presbyterian Church on Palm Sunday morning, 2013, was still basking in the glow from the Spirit’s presence the previous day when the sanctuary was filled with just under a hundred folks who had been drawn to Dunamis Fellowship Canada’s Annual Conference, focused on the topic of Empowered Prayer.

Prayer for Every Situation

We were delighted to host such an enthusiastic crowd, about a quarter of whom were attending their first PRMI event. They were hungry not only for the great meals but more importantly for God’s Kingdom to come and His Holy Spirit’s anointing and power.

Some came from churches where prayer ministry was implemented years ago in an earlier move of the Spirit, but was now feeling a bit stale.

Others came, recognizing that prayer under girds all moves of the Kingdom, aching to see the Kingdom come more fully within their local congregational contexts.

Some were stepping into new ministries or standing at life’s crossroads, seeking God’s direction, equipping, and empowerment for the new call ahead.

Some were facing personal challenges, and received prayer ministry in half-hour time blocks with a pair of prayer ministers.

Some were hoping to exercise prayer gifts that they don’t often get to exercise in their local contexts, to get further equipping as strategic level intercessors, event intercessors, or ministers of healing prayer.

Brad taught on listening prayer, healing prayer, and “prayer that shapes the future.”  In his usual fashion, he was bold to lead us past simply hearing the message into engaging with one another and the Holy Spirit in listening and in ministry.

Early afternoon, Phil Reinders, pastor at Knox Presbyterian in Toronto, led us in lectio divina (slow and reflective reading of scripture), after which people had personal time with Jesus in the prayer room, which had been decorated with contemplative prayer stations.

Presenting the Vision and Looking to the Future

There was a powerful sense of the Spirit’s presence as we presented the vision of DF Canada and laid out the initiatives that position us on the brink of some major advances in new regions of the country.

(Since 2013, there have have been Growing the Church conferences in Ontario and Alberta)

We laid hands on a Presbyterian pastor who came all the way from Vancouver Island (more than 4000km away on the far west coast of Canada) to call forth the advance of God’s Kingdom through DFC in that part of the country.

An Ignite is scheduled in May in a CRC church in the Vancouver area, and we sense a convergence of momentum in that area to fan into flame a new work in the west. 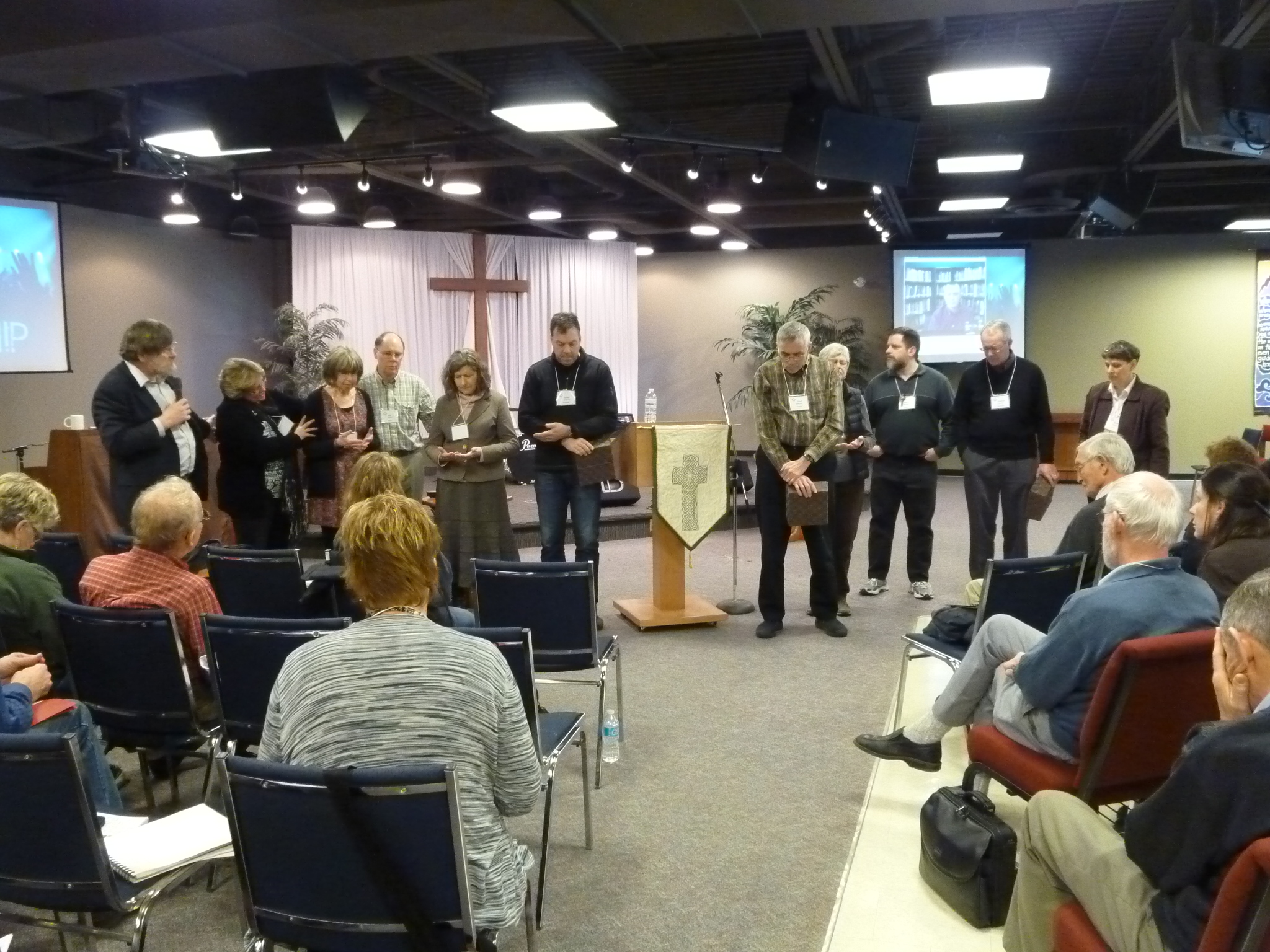 Brad’s call to participation and prayer was received with enthusiasm and we had 14 new intercessors sign up to hold up this ministry and our initiatives in prayer.

We welcome you to join us in praying and then giving great praise to God as he brings about powerful new works across this mighty and vast land.

A Fellowship in Transition

As a board of DFC we’re in transition, saying goodbye to Fred Reitsma who has served faithfully as treasurer for 7 years, and Joanne Rozendaal, our board member from the Edmonton area, who has served for 6 years.

Joanne will continue to be involved in organizing the Growing the Church event in Edmonton and a new Dunamis Track there in 2014.

We’re pleased that Anne VanderHoek from the Edmonton area is joining the board, and we’re in conversation with a few others who are praying about their involvement.

Please join us in praying that God will provide the leaders we need to govern wisely this work.

To learn more about Dunamis Fellowship Canada  please follow the link below.