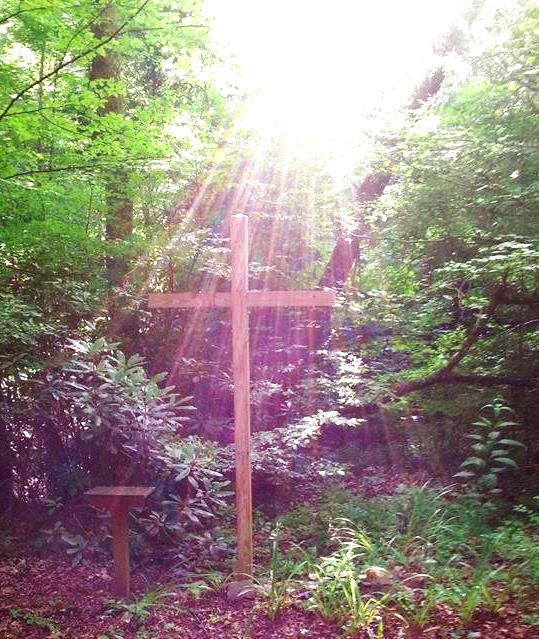 Jesus Christ is risen. He is risen Indeed!!

This is foundation of the Christian Faith:

These events are not myths created to justify faith but historical facts, which provide the basis of our faith.

Inside the Empty Tomb: An Easter Greeting From Jerusalem

All of this came home to me during our Jerusalem Prayer Endeavor when we visited the Garden Tomb. It is a short walk outside the Damascus Gate and very close to a hill with a stone outcropping that looks very much like a skull.

This is one of two places in Jerusalem that are thought to possibly be the location of the empty tomb.

The other traditional site is the Church of the Holy Sepulcher in Jerusalem. Much evidence points to the Garden Tomb being the actual site of the tomb of Jesus. It is in what is obviously a garden and is in many ways consistent with the facts in the Gospels.

As I walked around this lovely garden, actually went into the empty tomb itself, and celebrated communion with the prayer team, through the powerful presence of the Holy Spirit I encountered the resurrected Jesus Christ. (From the tears and joy I was seeing on the faces of the other members of the prayer team HE was meeting them as well.)

Stepping into the empty tomb itself and seeing the place where the crucified, bloody, very dead body of Jesus may have actually been placed was a powerful experience.

Reading the Bible story now, these words impact me as never before:

Mark 16:1-8 NET. When the Sabbath was over, Mary Magdalene, Mary the mother of James, and Salome bought aromatic spices so that they might go and anoint him. And very early on the first day of the week, at sunrise, they went to the tomb. They had been asking each other, “Who will roll away the stone for us from the entrance to the tomb?” But when they looked up, they saw that the stone, which was very large, had been rolled back.
Then as they went into the tomb, they saw a young man dressed in a white robe sitting on the right side; and they were alarmed. But he said to them, “Do not be alarmed. You are looking for Jesus the Nazarene, who was crucified. He has been raised! He is not here. Look, there is the place where they laid him. But go, tell his disciples, even Peter, that he is going ahead of you into Galilee. You will see him there, just as he told you.” Then they went out and ran from the tomb, for terror and bewilderment had seized them. And they said nothing to anyone, because they were afraid.

To see this place empty and to hear the angel say that he had been raised–no wonder the women “ran from the tomb, for terror and bewilderment had seized them.”

Today at the doorway out of the tomb is this simple, rather dingy wooden sign declaring the greatest world-shattering news ever written: “He is not here, for he is risen”. Jesus’ death and resurrection is rooted in a particular location at a particular time. Being there, seeing the actual location, and touching the hard cold stone, grounds this Easter reality in what my heart already knows–it all actually happened!

But we do not have to visit the tomb to encounter him, because he is resurrected and sits at the right hand of God the Father. In addition, we may experience him anywhere that the Holy Spirit is present. This is why a simple, dingy wooden sign announcing, “He is not here, for he is risen” will do. The truth of this realty is affirmed not in the empty tomb but everywhere we have met Jesus Christ alive as Lord and heard him saying to us, “Come, follow me!”