“The angel said to the women, ‘Do not be afraid; I know that you are looking for Jesus who was crucified. He is not here; for he has been raised, as he said. Come, see the place where he lay. Then go quickly and tell his disciples, He has been raised from the dead.’” Matthew 28:5-7

Mary and the other Mary went out that morning in deep grief to see the tomb. Two days earlier, they were present to see Jesus crucified and then laid to rest in this tomb. On this day, they came to see the tomb: hearts broken, hopes shattered.

We have read the Easter story so many times that it is easy not to be completely shocked by what happened.

Matthew tells us that there was a “great earthquake” and then an angel descended from heaven, rolled back the stone, and sat on it.

His appearance was like lightning. The guards fell to the ground in terror and then the angel addressed the women, saying, “Do not be afraid.”

The Angel greets the women at Christ’s empty tomb

The same words were spoken by an angel to the Shepherds at Jesus’ birth. He announced “good news of great joy”, the birth of Jesus (Luke 2:8-12). Great joy indeed, but just the beginning.

The women were told to go quickly and tell the disciples this good news; you and I are also commanded to go and tell the good news of Easter to all nations (Matthew 28:18-20). I can just imagine Mary and the other Mary running back to the city to find the disciples, their weeping transformed into dancing and great joy.

Jesus is alive! Just as he promised, he was raised from the dead. The tomb and the plans of Satan could not hold Jesus back!

One of my favorite songs is “In Christ Alone.” The third verse announces Jesus’s victory:

“And as he stands in victory, sin’s curse has lost its grip on me,
For I am his and he is mine, bought with the precious blood of Christ.”

I pray that you will know the great joy of Christ’s resurrection as you move through these final days of Holy Week toward Easter Sunday.

I pray that, like the women at the tomb, your mourning and griefs will be transformed into hope and joy as you meet the risen Savior. Jesus is risen! He is risen indeed! 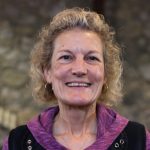 The Rev. Cindy Strickler
PRMI Director and Head of Staff