The Lord has richly blessed the Dunamis Project event in Edmonton, which began to take shape during prayer in November 2011. God continually led our small prayer group to, “Surely, as I have planned, so it will be, and as I have purposed, so it will happen.”
ISAIAH 14:24 (NIV)

As a leadership team we are humbled by God’s goodness and faithfulness.

We had received guidance ahead of time that this Dunamis project was going to be a “beachhead”.

As the fire of the Holy Spirit seems to be moving across the country to Edmonton there was significant resistance from the enemy towards the team in the preparation and during the event itself, the reason being that the event was strategic, geographically and spiritually. 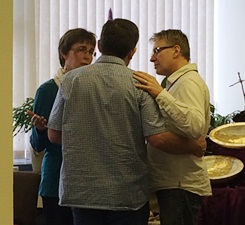 Praying at the Edmonton Dunamis

One of the significant things about this event is the community that was created among many of the people who came. People were willing to engage in the numerous discussion groups that helped create or deepen relationships, sharing and prayer increasingly becoming more free and vulnerable, so that by Saturday, the atmosphere was markedly different from the more reserved friendliness of Wednesday and Thursday.

This koinonia created by the Holy Spirit is such a treasure; it will provide the basis for the next project where new folks can enter into a community that has been established with shared Dunamis experience. This Dunamis Project event benefitted greatly from the initial Growing the Church event [held last November] in this way, and future events will continue to build upon the level of koinonia that now exists.

We are very thankful for the mentorship received by those stepping out in prayer ministry and aware of how important the healing work of the Lord is, so that, as He pours His Spirit in us and over us, we can minister from a place of fullness rather than digging deep in broken and empty places.

We were led into the “throne room” through spirit filled worship on Saturday morning, a karios moment, where the love of the Father poured forth from the throne and showered down on His children. During times of worship the kingship of Jesus was revealed and as we worshipped He spoke about who He is as King and what that means for all those who follow Him. The Lord led us into a deep place of adoration, praise, and reflection as we worshipped Him, the One who sits upon the throne.

Some comments gleaned from our evaluations:

I will never be the same; He washed my eyes with tears so I may see.
It helped straighten out some theological errors.
Felt waves of waves of God’s unconditional love.
I was ambushed by God’s love pouring through the speakers and fellow Christians.
I learned the necessity of having people who are equipped for this in my church.
I get to walk empowered!
Jesus showed himself to me, which is overwhelming, but most welcome!
He loves me, created me and wants me to be part of what He is doing. I love Him!
Thank you for a stretching holy experience, God be praise!

We are overwhelmed by His goodness, thankful for capable spirit-filled teachers, anointed worship leader, committed intercessors (on & off site) and effective prayer ministers. Trusting that the healing, restoring, redeeming work of Jesus went far beyond what we witnessed to and will have far reaching impact for the people but also in furthering the Kingdom purposes of Jesus.

Saturday evening the Lord gave us this treasure:
“Oh Lord, I will honor and praise your name for you are God.
You do such wonderful things!
You planned them long ago, and now you have accomplished them.” ISAIAH 25:1 (NLT)