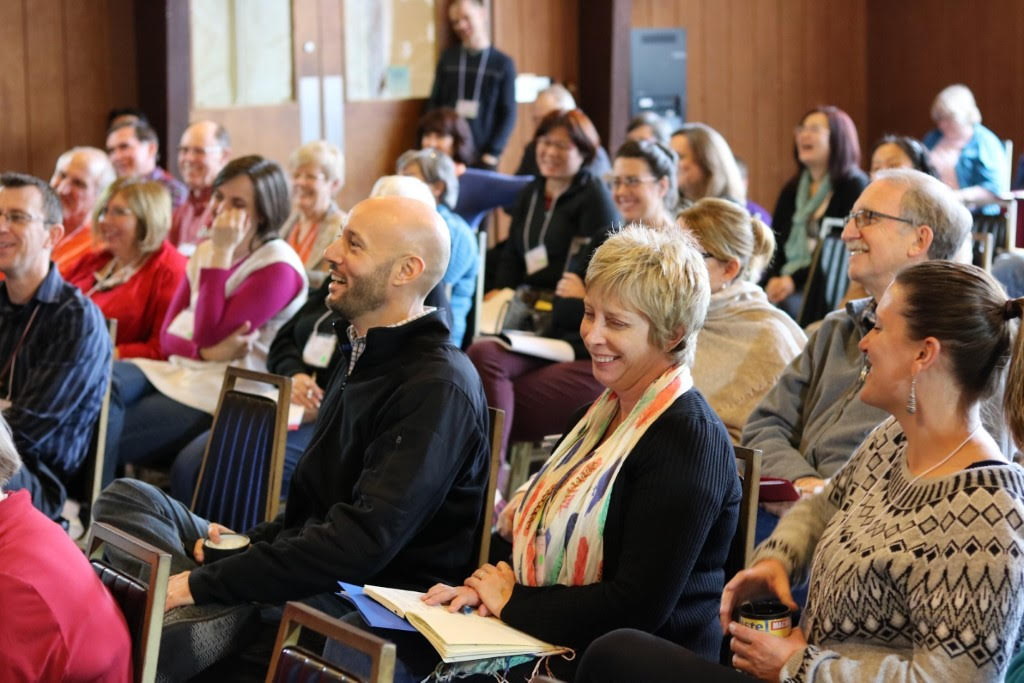 In spite of bad weather predictions and struggles with illness, more than 50 gathered in Black Mountain and we were joined by another 80 over the internet for the annual Dunamis Fellowship International meeting in Black Mountain, NC. We had representatives from Taiwan to Alaska to the UK to Haiti and across the US and Canada.

We chose to make the Dunamis Fellowship International (DFI)  more of a prayer and discernment time than usual. We spent less time reporting and more time focused in prayer, using the Prayer Guide for Kingdom Opportunity 2014-2016.

We prayed for all of PRMI’s equipping initiatives worldwide. This included prayers offered in multiple languages — Spanish, English, French, Indonesian and Chinese–for teachers and leaders to be raised up to carry the Dunamis teaching “to the ends of the earth.”

We spent additional time praying for the different generations involved in this ministry and praying for faithfulness to transmit Dunamis to future generations.

We celebrated the birth of the first non-English-speaking regional body of the DFI. The Korean Dunamis Network has requested and been granted permission to establish the Dunamis Fellowship Korea. Their founding meeting will be in March.

We also had an opportunity to hear from and pray for Brad Long and Doug McMurry about their plans for a trip to Israel, Jan 28-Feb 4th. They have returned from Israel – look for their report coming soon.

Saturday morning’s prayer focus was Kingdom Asset #3, SEND, which has to do with all our mission outreach and especially developing the mobile Dunamis in Chinese and Spanish. As we heard stories of the impact of Dunamis around the world, we are awed by what God is doing. You can still view these short stories on line by going to DFI Livestream in videos #4 Praying to Send,#3 Saturday 3, and #2 Saturday Morning 4.

You can read the written reports Mission Reports. It is thrilling to see the fulfilling of Mobilizing, Equipping, and Deploying being realized, and what a testimony to the Lord’s power to see what He has accomplished through very normal men and women, the Dunamis Fellowship International!

People heard the history and vision of the Community of the Crossthen walked and prayed on the land. As people prayed, they bore witness to what the Lord has told the Leadership Team (and been confirmed by the PRMI Board of Directors).

The focus needs to be EQUIP and SEND. We are to wait until a later point for building any more buildings at the COC.

The ministry team in place now is called to focus on building program and people, not the buildings. We sense the Lord will provide the buildings at the right time. Schematics, drawings, and infrastructure are ready to go forward when the time is right.

But the Lord is saying, “Not now.”

Many of the group also went up to visit “The Ridge”, a wilderness youth camp at Laurel Ridge, which is across the street from the Community of the Crossand is up for sale. Many wonder if this camp would be a good place for Upward Challenge and whether the Lord might be calling us to acquire it.

There was a really good discussion and sharing of discernment after the meeting and the guidance to this point is to not shut the door, but to wait and see what the Lord wants to do with this property.

Saturday evening closed with an extended time of praying for each other to be empowered by the Holy Spirit for the work ahead. People laid hands on each other and the Spirit moved in power. Gifts were released, guidance given and even some healing occurred as people prayed in obedience to the Sprit’s direction.

Sunday morning we concluded with worship and communion, led by Chris Walker and Marcia Bronson. Then people scattered again to the four corners of the globe, back to the places where the Lord has called them to live and serve and be the Fellowship which is truly international.