Dunamis and the United Church of Christ in Japan!

From February 8-11, 2010 The Rev. Cindy Strickler – Director of the Dunamis Fellowship International, The Rev. Peyton Johnson – PRMI Board member, and The Rev. John Chang – past President of the PRMI Board and now Director of Asian Ministries, provided the teaching for the In the Spirit’s Power Dunamis Event in Takasago, Japan.

This Dunamis is co-sponsored by the Japan Renewal Association and Takasago Church. There follow some reports from them of the move of the Holy Spirit that they experienced.

Summary of the trip by The Rev. Cindy Strickler:

“It was an amazing trip! We are blessed to be working with 2 of the key leaders in renewal in Japan – Rev. Masaaki Tezuka (who you all met in 2008 – head of the sister organization to PRMI in Japan and pastor of Takasago Church, where the Dunamis is being held) and Rev. Paul Ariga (our interpreter who is the president of Revival Biblical Seminary and involved in Transformation Japan and all kinds of renewal work). 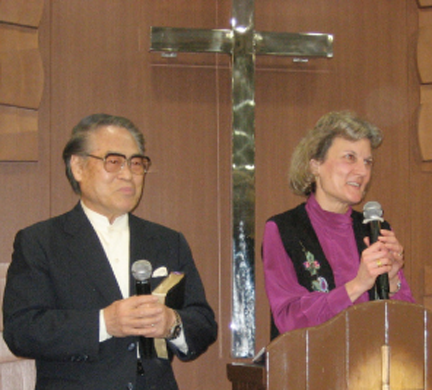 The Rev. Paul Ariga and The Rev. Cindy Strickler

The teaching went very well and people got so excited about listening to the Holy Spirit and getting guidance. Gifts were released and experienced. It is always a challenge to know what all is happening, because of language, but we did do some debriefing and heard from quite a few people.We also heard that many bought the video tapes so they could study the teachings and share them with others. We are excited to see how people grow over this next year. We are also trying to make the transition to developing a local team. It will be a challenge, but we will start making steps in that direction. They are watching the three of us (4 with the translator) team together and have commented on how amazing that has been. 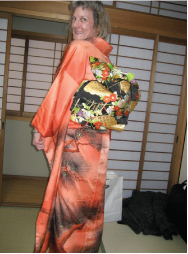 The Rev. Cindy Strickler in a traditional Japenese kimono

This is me in the kimono for church on Sunday.   Not a great shot, but gives you an idea of what it looked like. They were quite pleased that I dressed Japanese. It sure gave me an appreciation of Japanese women and what they go through!”

“Tuesday was a very full day.  I taught for almost 2 hours a lesson that I had never taught before – a strong anointing led me through and the Lord tied all of our teaching and exercises together beautifully.

In the afternoon we had the participants “practice” listening to God and praying for each other accordingly (like we do in 1:8) – more than half the room said that this was the first time they had ever heard from God as they were led to pray!  Praise God – very moving!

As usual the people are so gracious and generous.  And they are so much fun – Japanese believers are liberated to be their delightful selves!

We the team are getting weary – it is an intense schedule of focused teaching, conversations, and being tortured with superb food 🙂  Please pray for endurance. 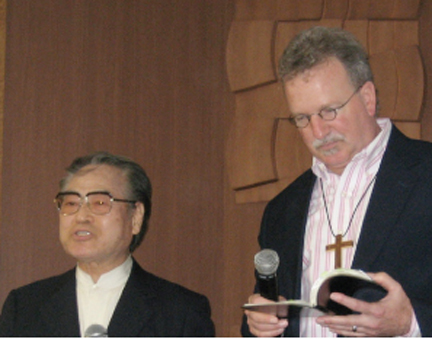 The Rev. Paul Ariga and The Rev. Peyton Johnson

There definitely is spiritual warfare going on – manifesting itself in a number of ways.  Please pray for protection and against distraction – to open the door for God to do all that He sovereignly chooses to do.  Tomorrow (Feb 11) is the national holiday of the birth of Japan, a Shintoistic celebration of the Sun Goddess.

I taught for 2 hours this morning and will teach tonight also; tonight is our final evening – please pray that we will have a powerful time of worship and prayer after the teaching.

Thank you so much for your prayers,
Peyton 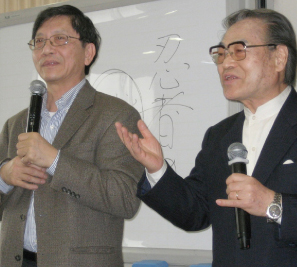 The Rev. John Chang and The Rev. Paul Ariga 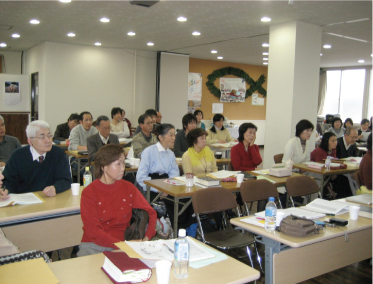 Japanese Participants at the Dunamis Project

An observation by Brad Long –

This was really very remarkable the way the Holy Spirit was running the show. While I was in England dealing with my own needs for prayer support the Holy Spirit kept prompting me as to how to pray for the team in Japan. A lot of the time I was in England I did not have an internet connection so could not get any of the updates coming from the team, including the urgent calls for prayer as they came under spiritual attack. But the Holy Spirit, when we listen to Him, works better then the internet! On a number of occasions I was called into the gap to intercede only to find out later that that was just when they were under attack or there was a move of the Holy Spirit taking place. This happened to a number of intercessors scattered from the UK to North America.

This work in Japan is truly strategic for the Kingdom of God. There was once a thriving Christian community in Japan founded by Catholic missionaries, but in a terrible time of persecution nearly all these Japanese Christians were martyred. Ever since then the Church has struggled in Japan; one main reason has been that Christianity was seen as something alien to Japanese culture and in fact many of the liberal missionaries did indeed bring Western Culture rather then the Christian Biblical faith. When the Holy Spirit empowers and directs the preaching of the Gospel into a culture, He knows exactly how to honor the culture and clothe the essence of the Gospel in forms that enter and later transform the culture.

This is what is taking place in this extraordinary move of the Holy Spirit that is taking place in Japan that PRMI has been able to take part in. This is why it was so important that Cindy wear an elegant kimono and dress as a Japanese. This is the significance of Peyton’s comment – “As usual the people are so gracious and generous.  And they are so much fun – Japanese believers are liberated to be their delightful selves!” This amazing work is taking place as the Holy Spirit honors our cultural differences by bringing them into the new reality of the Kingdom of God!

Pray that the seeds that were sown by this team will bear much fruit as the Japanese pastors take the teaching back to their congregations and seek to grow them in this dance of cooperating with the Holy Spirit. The powers and principalities do not want this to happen! But God the Father does!