The Dunamis Track in DR Congo is launched!

This past May 19-25 (2014) in Lubumbashi, a city of 6 million people, God’s Spirit moved in a mighty way as 150 some people came together to pray, sing, praise, study and engage with each other and with God. 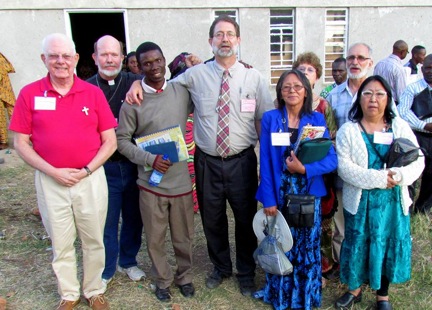 The US team teachers, Rod Pinder, Gary Chorpenning, and Gary Coppedge taught the Gateways to Empowered Ministry, Dunamis Unit #1, as prayer ministers Eleanor Coppedge, Irma Bijak, Ledia Scott, and Dick Ferguson stood their posts on the walls around the room where we met.

The DRCongo team leaders Clement Mudimbi, Francois Djoma, and their colleagues did a wonderful job of preparing the way.  Logistics moved with great precision as all of us moved in sync with the Holy Spirit.  Youth choirs from across the city and beyond stirred us with their dedication and engaged presence. 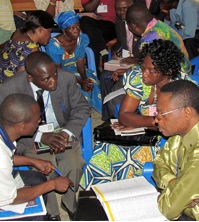 When the time came, men and women stood to give their testimonies as to how God was working in their lives during this Gateways Dunamis.

On Friday, when the invitation to come forward to receive prayer for empowerment was given, nearly everyone responded.

When we offered to pray for physical needs, again the lines were long and the requests were many. Our God was so gracious and merciful.

The next day people spoke of backs being restored to alignment, stomachs, pancreas, livers, kidneys, and a whole range of other physical needs being touched, rebalanced, and set right.  And this was not even the Healing Dunamis!

The DR Congo team has worked diligently to translate the Gateways manual.  They have been able to do the first part and print it for distribution.  The man who worked so hard on this spoke of how he was touched and changed by engaging with the truth of what he was translating.

Speaking of translating, all throughout the week our teaching team was assisted by a very able interpreter who moved from English to French to Swahili with great ease. Since the Holy Spirit is the Great Communicator we had no problem with functioning in various languages.

When we dedicated the in-Congo produced Gateways manual we actually used five languages! 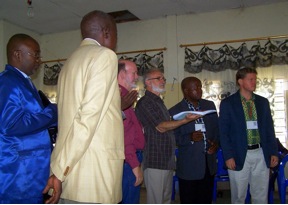 Now that this first Gateways has been so well received, the DRCongo team and our US team are beginning to think about Dunamis Project #2, In the Spirit’s Power and have agreed, the Lord willing, to present this second Dunamis conference in May of 2015.

At the same time, we are praying about at least two of the Congo Dunamis leaders coming to the Community of the Cross this next year so they can receive the same equipping that our US team leaders have received.

One last note. In Lubumbashi we experienced a mighty move of God as much needed reconciliation between estranged individuals and families happened right before our eyes.  I praise God for this and for all the ways people’s lives were touched and changed.

I thank all those who prayed before and during this Congo Dunamis and now I ask you to continue praying that the work God began will continue.

Thanks also for the many who gave financial gifts to cover airfares and the cost of hosting this event in the Congo. Pray that the resources will be there for the 2015 event and to cover the cost of bringing two key leaders from the Congo to the US for Leadership training next summer!