Does Korea Need Our Growing the Church Conference? 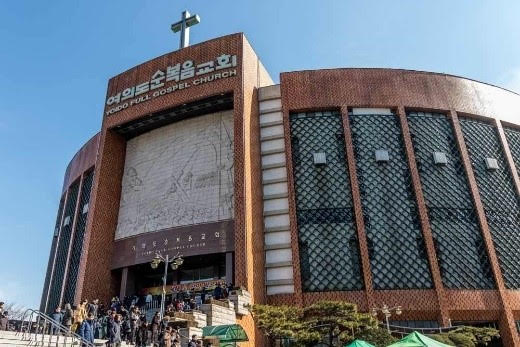 Why would there be any need for PRMI’s Growing the Church teaching in Korea?

Is not Korea famous for its mega churches which, for a season, astonished the world with their amazing growth as well as prayer power and evangelistic outreach?

Laura and I (Brad) were missionaries to Korea in 1975.

We will never forget the sheer exhilaration of gathering with several hundred thousand Korean Christians at the Easter sunrise service on Yoido Island at The Central Full Gospel Church.

This church, founded by the Rev. Paul Cho, was the most famous mega church of all.

In those exciting days Christians from around the word poured into Korea to learn their secret of church growth.  From the photos, you can get a feel for the size. 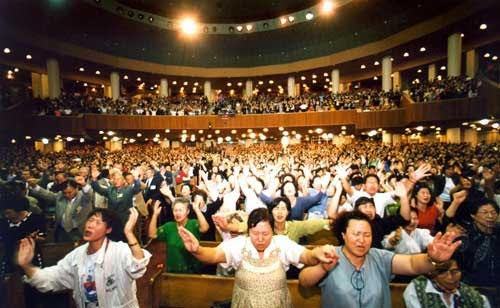 The Fall of Church Growth

While bringing millions of people to saving faith in Jesus Christ, the megachurch movement in Korea endured (not surprisingly) many direct attacks by Satan.

There were all sorts of problems with the movement.  In recent years “church growth,” became a byword for:

This all dishonors Jesus Christ.

The negative results of the megachurch and church growth movement were so intense that when the members of the PRMI Dunamis Fellowship Korea saw the title of our book, Growing the Church in the Power of the Holy Spirit they said:

“No! You cannot use that term ‘growing the church’ here in Korea. For us, it now has a negative meaning because of the scandals of the megachurch movement.”

But Rev. Young Woon Ahn and Ben Torrey saw that this book is not merely about numerical church growth–it is about growing the church’s ability to live and work in the power of the Holy Spirit, co-operating with what the Holy Spirit is doing.

They Saw the Need for Growing the Church

They concluded that we needed to bring this teaching to Korea. 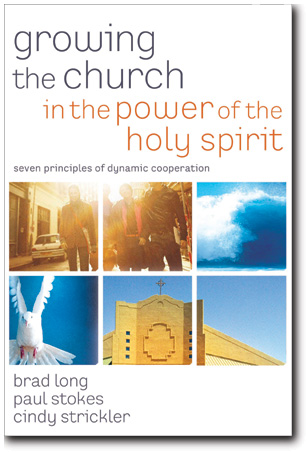 This Growing the Church book was a summary of the core teaching of the Dunamis Project and a way to redefine growing the church according to biblical principles of cooperating with the Holy Spirit.

Receiving the Growing the Church Teaching

From October 17 to 21, 2016, The Rev. Cindy Strickler, The Rev. Paul Stokes, Mary Ellen Conners, and I joined the DFK Leadership Team to offer the Growing the Church teaching to the members of the Dunamis Fellowship Korea.

Many of these pastors and church leaders had been through the Dunamis teaching and were teachers and leaders in the Dunamis Project equipping that has been offered in Korea over the past 8 years (Read more about Dunamis in Korea).

Most amazing, however, were the almost 20 Korean missionaries who had come in from around the world to take part in the event–many of whom had no previous experience with our Dunamis Project equipping.

Our approach to the equipping course was for us from the UK-USA teaching team to introduce the core biblical concepts of the Two Foundations and the Seven Dynamics of Cooperation with the Holy Spirit.

Ben Torrey, Pastor Ahn, and the DFK leadership team took the lead in giving practical examples of how to apply the principles in their Korean cultural context.

We constantly moved from teaching and talking into welcoming the Holy Spirit to move among us, embedding these principles in our hearts and minds by listening to His invitation to cooperate with Him in ministry.

Example of Cooperation with the Spirit

For just one example of this dynamic of the working with the Holy Spirit–who was doing the teaching–I offer the following:

We had been teaching on receiving and discerning guidance from the Holy Spirit as the key to cooperating with Jesus Christ in growing the Church. I started to get some guidance about what the Holy Spirit wanted to do.

I was to ask Ben Torrey to sit up in front of the entire group of 100 and to ask several of the members of the DFK leadership team present (5 pastors) to join him in the “hot seat.”

I then was to pray for the Holy Spirit to fall upon the entire group and to speak through them, giving guidance through prophetic words and visions to Ben Torrey and the DFK leadership team.

I shared this with Cindy for discernment and her response was, “Sounds very risky, but see if Ben is willing.”

We did, and he was.  So we stepped off the cliff of obedience and set up this experiment of waiting on the Lord for guidance.

In myself, I found the gift of faith to trust Jesus Christ that He would speak.

After a time of silent waiting upon the Lord, members of the group started to give the words and visions that were received. Ben’s wife, Liz Torrey, wrote them down and patterns of guidance quickly emerged.

At the end, Ben Torrey stood and, deeply moved, affirmed that the guidance that was being given was indeed from the Lord. He said that the various images received and shared were a powerful confirmation from the Lord of what God was doing and a great encouragement to him personally as well as for the leadership team.

Through Korea to the World

One aspect of the guidance and promise given was that the Lord would increasingly use the Dunamis Fellowship Korea to carry this teaching to other nations and languages through the many Korean missionaries around the world.

This is already happening in China (Korea sends more missionaries abroad per capita than any other country).

It was all an amazing demonstration of the Holy Spirit’s way of giving guidance for growing the Church’s engagement in advancing the Kingdom of God.

God moved at this equipping course.

From what I saw and experienced, I believe that a new “Church Growth Movement” has been launched by Jesus Christ, one based on His principles of cooperating with the Holy Spirit in such a way that His body grows and His work advances in the world to the glory of God the Father.

Below, Paul Stokes, one of the teachers at the first Dunamis track in Korea, shares his impressions from this first Growing the Church.

It was a joy and a privilege to return to South Korea six years after my previous visits to Jesus Abbey, where we had provided teaching and some leadership training for the Dunamis Project.

In a hierarchical context where seniority means power and where leaders are rarely questioned, the Dunamis emphasis on teamwork, mutual submission, shared discernment, and accountability are distinctly counter-cultural.

It was wonderful to see how the Holy Spirit has been growing the DFK leadership team to embrace these concepts and begin to function as co-workers with a shared anointing.

From Teaching to Experience 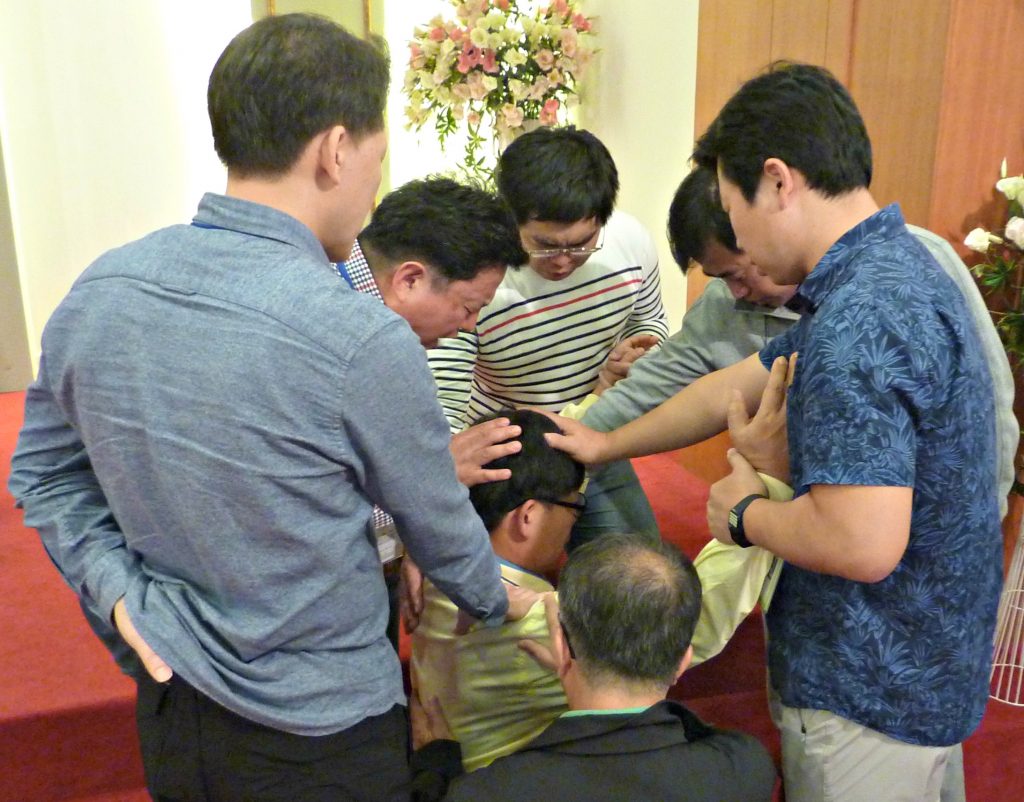 Although we were present in order to teach–which I love doing–the real highlights for me were the opportunities to pray for missionaries, evangelists, and pastors seeking fresh anointing from the Holy Spirit for their roles in the Kingdom of God.

When I joined one group praying for a Korean missionary to China I did not expect to know what the others were hearing from the Spirit or praying about, though I knew I needed to be praying for that person.

But when one of the others asked (in English) whether I had received any revelation from the Holy Spirit, the image and focus that had come into my mind was the same as what the Lord had revealed to her.

What a wonderful reminder that the Holy Spirit is not constrained by differences of language and can work across cultural barriers to enable a multinational group to receive guidance for praying with focus for one of Jesus’ missionaries!

Please pray for the continued development of the Dunamis Fellowship Korea.

For 150 years God has used Korean Christians as the vanguard of the advancement of the Kingdom of God.

As members of the Dunamis Fellowship International, I believe that they are still fulfilling this role by enabling the teaching of the Dunamis Project to continue to go global.

Join Us in Black Mountain for the Dunamis Fellowship International Annual Meeting, January 18-22, 2017.

We are so excited that Pastor Ahn and Ben Torrey, co-directors of the DFK, as well as some Korean missionaries involved in strategic work in Asia will be joining us at the Dunamis Fellowship International Annual Meeting.

Please join us at that meeting January 18-22, 2017, at YMCA Blue Ridge Assembly in Black Mountain, NC, USA.  Come and share in this great move of the Holy Spirit!