Was the Earth Quake God’s judgment against Haiti because of Voodoo and the pact made with the Devil over 150 years ago? Or was this just a natural event? Or a Kairous moment for Haiti to rebuild on a new foundation?

What ever the ultimate cause of this terrible event that caused such awful suffering our call is to pray that the stronghold of Voodoo will be defeated and that the gospel of Jesus Christ will go forth and rebuild this nation on the basis of a commitment to Jesus Christ rather than on any other foundation.

Here are some scriptures sent by Marg Van Meter that may help us praying in the aftermath of an earth quake:

EARTHQUAKES CAN BE THE BEGINNING OF NEW BIRTH

7 When you hear of wars and rumors of wars, do not be alarmed. Such things must happen, but the end is still to come. 8 Nation will rise against nation, and kingdom against kingdom. There will be earthquakes in various places, and famines. These are the beginning of birth pains.

4 “ Where were you when I laid the foundations of the earth?       Tell Me, if you have understanding.
The natural realm reflects what God is doing in the supernatural realm. This happened at Christ’s resurrection. The earth shook (the natural) and the spiritual (supernatural) world was forever shaken.”

THE MIRACULOUS HAS FOLLOWED EARTHQUAKES

50 “And Jesus cried out again with a loud voice, and yielded up His spirit.  51 Then, behold, the veil of the temple was torn in two from top to bottom; and the earth quaked, and the rocks were split, 52 and the graves were opened; and many bodies of the saints who had fallen asleep were raised; 53 and coming out of the graves after His resurrection, they went into the holy city and appeared to many.  54 So when the centurion and those with him, who were guarding Jesus, saw the earthquake and the things that had happened, they feared greatly, saying, “Truly this was the Son of God!”

25 But at midnight Paul and Silas were praying and singing hymns to God, and the prisoners were listening to them. 26 Suddenly there was a great earthquake, so that the foundations of the prison were shaken; and immediately all the doors were opened and everyone’s chains were loosed. 27 And the keeper of the prison, awaking from sleep and seeing the prison doors open, supposing the prisoners had fled, drew his sword and was about to kill himself. 28 But Paul called with a loud voice, saying, “Do yourself no harm, for we are all here.”  29 Then he called for a light, ran in, and fell down trembling before Paul and Silas. 30 And he brought them out and said, “Sirs, what must I do to be saved?”

This earthquake opened doors and chains were loosed. It freed Paul and Silas and forever shook up the Philippian jailer and his household. Just as the door of the prison was opened the doors to their hearts were open to salvation and the chains of darkness on their lives were loosed.

Pray that the chains of devastation, poverty, and corruption, voodoo will be loosed from the Haitian people. That they will have hope for the future that God has for them and refuse the voice of discouragement. The Haitians and those who help will be empowered to do the impossible, because with God all things are possible.

Like David we are to place our trust and faith in God in the land of the living. Isaiah 43:18-19 says, “Do not remember the former things, nor consider the things of old. Behold, I will do a new thing, NOW it shall spring forth; shall you not know it? I will even make a road in the wilderness and rivers in the desert” (NKJV).

God alone holds Haiti’s future, destiny and eternity. We are to lean on God and trust not in our own understanding.

“Look at the nations and watch —  and be utterly amazed.   For I am going to do something in your days  that you would not believe, even if you were told. 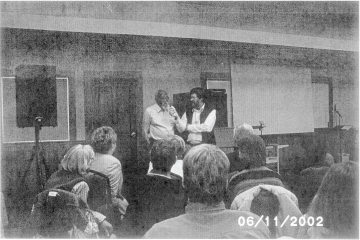 The photo above is of Father Lafonant asking Brad to bring Dunamis to Haiti – Pray that now with the Earth Quake that we may be able to continue to send teams to Haiti. While the focus is on meeting the physical needs, the spiritual needs are just as important and in the long run will determine whether Haiti is able to rebuild on a new Christ centered foundation. PRMI has the opportunity through our Dunamis project to shape the future of this nation. Pray that the Holy Spirit will use us to that end and will provide all that is needed so we can continue to play our part.

There has been a lot of speculation about this. There was even an article in the Wall Street Journal about the role of Voodoo in holding the country in a state of abject poverty. Here is a missionaries’ perspective on this – Marg Van Meter, a member of the Dunamis Fellowship, also sent this to me about what happended.

Dear Friends–We are back in Gonaives!!  Thank you for your prayers!!  We enjoyed our stay with our missionary friends in Port au Prince, Dan and Liz Carl.  We are so grateful for their generosity and hospitality.  They were not only an awesome host and hostess, they were great tour guides as well!!    I have been asked if I am really convinced this earthquake was a judgment “wake up call” from God for Haiti and how I can be sure.

At first, I didn’t want to be quick to jump in and assume this was God’s judgment…but as I drove through PAP and saw the buildings and heard the stories, I am more convinced the earthquake is God’s response to the evil practices and pagan worship in Haiti.  Let me tell you a few more stories that I didn’t share before…   As we drove the streets of PAP, I was overwhelmed to see the government buildings in heaps of dust. In this same area, we drove past a beautiful building with beautiful landscaping and I asked Liz what building it was.  It was the Bible Society where they distribute and sell Bibles–still standing and no evidence of any damage at all.

We drove past Dan’s office building for his ministry — a 2 story building in the midst of all the damage (located right on Delmas, the main business street of PAP and not far from Caribbean Market which collapsed).  No cracks…no damage in Dan’s building.   Liz gave me a map called “EARTHQUAKE AFFECTED AREAS” (data collected from the UN) that showed the cities near Port au Prince with percentages of how much each area was destroyed.  I noticed the city of Leogane was 80-90% destroyed–the largest percentage of damage of any of the other cities.  Liz told me this had been the heaviest voodoo area in the nation of Haiti.  The story is that the city actually “sunk” or was swallowed up after the earthquake!!

I heard no reports of Christian missionaries killed, but I heard these amazing stories of God’s protection of His people… a Canadian missionary couple was inside the Caribbean Market minutes before the earthquake.  The wife told her husband she was feeling sick and said she needed to leave.  They began walking to their apartment building and were in between the two buildings when the earthquake hit.  The Caribbean Market and their apartment building were both totally destroyed.  A Dominican Republic missionary couple and their 2 sons had just left the Caribbean Market and were headed towards the Montana Hotel where they were spending the night.  The earthquake hit while they were driving in between the two places — both buildings were destroyed and many deaths occurred in each of them.

I talked to another missionary who’s wife makes tiffany lamps.  The caretaker of their house was outside when the earthquake hit and he said their 2-story house swayed side to side and then began bouncing up and down.  A young man on the roof had to hold on to a pole to keep from flying off the roof.  The lamps hit the floor, but only one lamp sustained damage–the “damage” was only a slight chip. (Remember, there is no carpet in Haiti…only cement floors covered with ceramic tiles!!)  The President of Haiti, President Preval, has called for prayer and fasting for Haiti on February 12, 13, and 14.  Please join us in this world-wide prayer meeting for Haiti–Port au Prince has to be rebuilt on the solid foundation of Jesus Christ.

Thank you so much for your concern for our family, for your prayers for us, and for your prayers for Haiti.  We love you all and miss you all very much!!  God bless you!!  Love, Jan    PS We just went to pick up Christopher and his brothers and sister to spend the night with us.  They were unable to come because their mom just had a baby yesterday … a little boy.  Praise the Lord he is healthy!!  We’ll send more information and pictures when we have them!!  Amanda is doing much better too.  She still is very tired and has a sore throat, but the swelling in her face is almost gone.

Luke 1:37 “For nothing is impossible with God”.