Cooperating with the Holy Spirit in Taiwan

Thanks for your prayers while we were in Taiwan offering Unit # 2 of the Dunamis Project. I wrote this on the way to the airport to fly home after preaching three times Sunday morning at the Jung Shao Road Presbyterian Church in Taichung and enjoying a wonderful closing feast.

Looking back on this week I am amazed. Out of many high points, I share with you four which are good illustrations of learning to cooperate with the Holy Spirit.

The first was preaching in a large traditional, packed out Taiwan Presbyterian Church in Taipei. John Chang preached the first service in Taiwanese. John’s preaching on the four works of the Holy Spirit was empowered and well-received.

Among those attending was the past President of Taiwan, Dr. Li. More than 25 years ago I invited Dr. Li to come to the Presbyterian Lay Training Center at the Bible College to lead a Christian businessmen’s conference. He was Vice-President at the time. Meeting him again brought back great memories.

There were lots of young people at the second service, so they asked me to preach in English and I did, with John Chang interpreting into Mandarin. 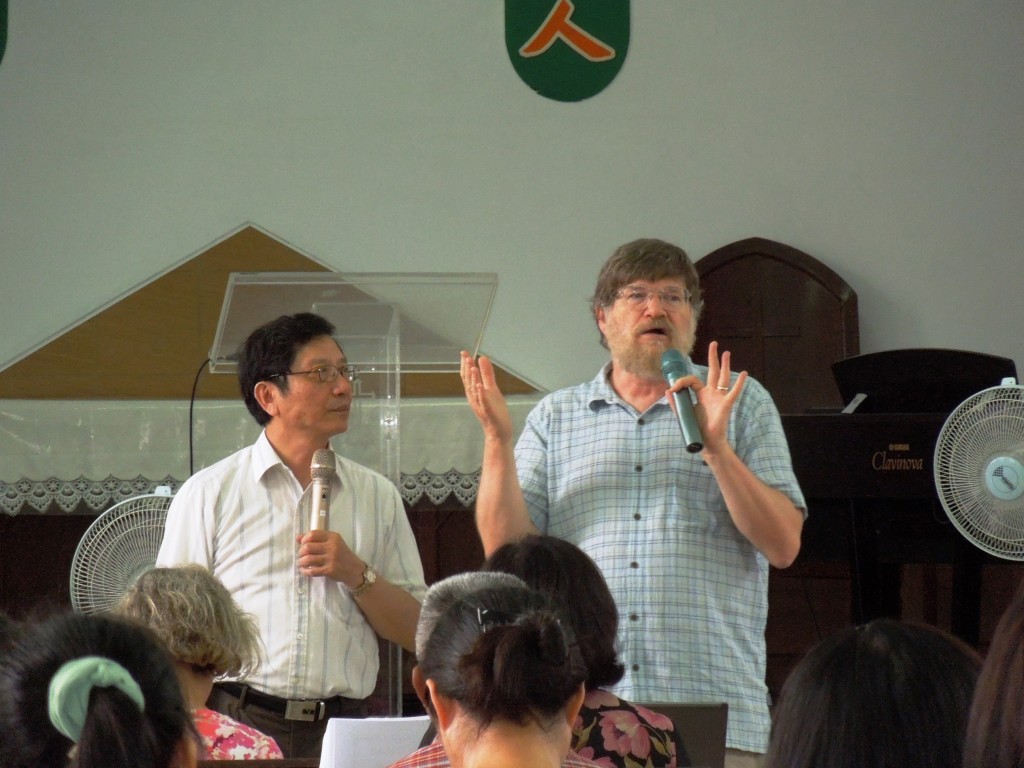 I was led to preach on how to receive and grow in the power of the Holy Spirit.

John warned me that everyone was so conservative in that congregation that it would not be a good idea to lead them on into prayer. So even though I was aware the Holy Spirit was starting to move, I concluded my sermon without inviting the congregants to pray for the empowering of the Holy Spirit.

To our surprise, the worship leader picked up right where John and I had stopped and stepped directly into the Kairos moment.

He asked the Holy Spirit to come upon them and then directed them through the steps of asking, receiving in faith, and walking in obedience.

Lo and behold, the Holy Spirit moved in power!

We remained quiet for another several minutes as the Holy Spirit moved on the group. We sensed the spiritual hunger and excitement among those who sought the Lord in prayer.

Many people came up to us afterwards, especially to John, to ask for more such teaching. To a person, they expressed their conviction that this was just what they needed to continue to grow as a congregation. 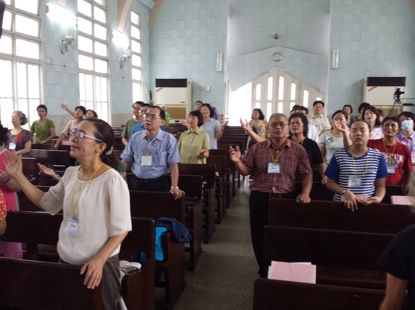 From Sunday to Dunamis

The second high point was in Taichung where again our focus was on how to cooperate with the Holy Spirit and the gifts of the Holy Spirit, Dunamis Unit #2.

Most exciting was to watch those who got involved in Intercession. Mary Ellen Conners was joined by the Rev. Charity Chen, first filled with the Holy Spirit when she was my student at the Bible College.

Of the 40 people who showed up the first morning for the Gateways make-up session, most stayed for the teaching on Intercessory prayer in the afternoon.

Out of this group, many volunteered to provide the intercessory prayer backup for the rest of the event. Mary Ellen and Charity did a great job forming them into a team by giving them practical instruction in event intercession. It was due to this anointed and consistent prayer covering that we experienced such effective practice of cooperating with the Holy Spirit.

They also provided a prayer shield of protection. At one point as I was teaching, I suddenly experienced a demonic attack.

A wave of nausea came over me.  I felt chest pains.

I asked one of the intercessors, another former student of mine from the Bible College, to step into the gap to pray for protection from the direction the attack had come.

When the intercessor prayed, the attack lifted and I was able to continue to teach.

I found out later that three other intercessors had what could have been a sensory word of knowledge as they spiritually detected the fragrance of incense, they also detected an evil presence coming from that area.

Further investigation revealed that a non-believer had died in that area in the lane across the street from the church three weeks before and there had taken place the Traditional Taiwanese Buddhist/folk religion ceremonies to take the person’s soul to the next stages of the spirit world.

All of this confirmed that there had been something actually happening when I got hit by that demonic spirit.

Mary Ellen and Charity were able to work effectively together not simply to model intercessory prayer work but also to launch many gathered there into intercessory ministry. I believe this core of intercessors will continue to provide the prayer cover for a move of the Holy Spirit in Taiwan. Perhaps, for China as well!

On our first afternoon

The third high point also took place on the first afternoon in Taichung. Sixty participants committed to the full-day equipping process. John and I had been teaching on the dynamic of cooperation with the Holy Spirit, and now found ourselves completely exhausted. Spiritual attacks had come against us in waves all day. Jet lag, no doubt, had also caught up with us. Never mind how hot and humid it was. We were spent! 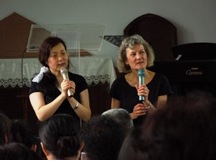 How good it was to hand off the teaching mantle to Cindy Strickler and her interpreter, Ji Dong Shan, for instruction on how to receive guidance from the Holy Spirit.

After teaching, Cindy moved the people into groups of 3 or 4 for an exercise in receiving guidance. This was their first opportunity to practice what they were learning.

Cindy instructed them in their groups to select one for whom the others would pray. That one was not to share a prayer request aloud. All were to remain in silent prayer before the Father. She encouraged those praying to trust the Holy Spirit to reveal to them how they should pray. After a time of stillness, they were to step out in faith to pray. The marvel in this kind of exercise is that the Holy Spirit is gracious so often to put spoken words of prayer into their mouths matching exactly, or at least closely, the actual need. 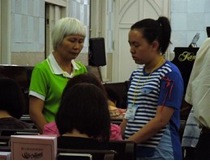 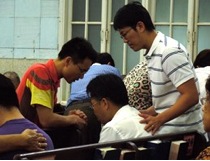 This was the first of several occasions when Cindy, with Ji Dong interpreting, led them in such prayer practice. Each time both those who received words to pray and those who were ministered to were greatly blessed. We took this same practical approach related to words of prophecy, as well as to words of wisdom and knowledge. In the testimonies at the end of the whole event, most all echoed that these exercises were their favorite parts of the equipping event! How gratifying for us that the participants enjoyed moving from clear biblical teaching on the gifts to actual practice of them!

What happened when I taught on Tongues?

The fourth highlight for me came after I taught on tongues and prophecy. That particular day was full of instruction and practice in small groups to receive prophetic words.

At 5:00 pm, everyone was tired and hungry, ready to break for supper, with a little time to relax before the evening public meeting.

The next thirty minutes were amazing! It felt like a version of the first Pentecost.

We laid hands on people seeking to receive the gift of tongues or prophecy. As I did I would often get the guidance to, independent of whether or not they were showing any manifestations of the Holy Spirit, I would encourage them to lay hands on others to receive the gift.

Joy flooded over all as we worshiped and praised the Lord! The dynamic of receiving spiritual gifts as we reach out in obedience to pray for others is consistent with the nature of all the gifts of the Holy Spirit: They are given as we need them to follow Jesus Christ in serving others.

Debriefing figured prominently throughout the event. We asked the four questions of discernment routinely at the conclusion of teaching and practice, whenever the Holy Spirit made Himself known. 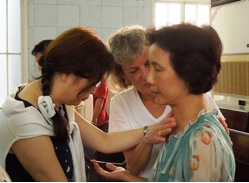 Rev Cindy Strickler praying for one of the attendees

When the Holy Spirit shows up in power to bestow spiritual gifts, we need to discern how He worked in our midst, and if, in fact, it was He in charge. Further, we make ourselves vulnerable to scrutiny to determine how we can cooperate with Him more effectively the next time, even naming mistakes we may have made along the way.

The Four Questions of Discernment

Check out the video of the Four Questions of Discernment

Over and over during this event, our debriefing sessions led us to conclude that, yes, Jesus was glorified, yes, it was biblical, and our witness was unified and confirming of the Spirit’s word. And in answer to question four, yes, there was often immediate evidence of the Holy Spirit’s powerful touch to be seen and verified.

We look forward to seeing even greater confirmation of the Holy Spirit’s work among us as the fruit of this event grows to maturity among those who took part in it. We trust that this will be the case for the glory of Jesus Christ and the advancement of His Kingdom!

Please pray for guidance as to how we can continue to offer Dunamis equipping in Taiwan. Further, we must now adapt this teaching for the Mobile Dunamis for use in China. Dunamis Unit #1 is already in use there. Next is Unit #2. A team is headed to China later in the year.

We always seem to be short of the resources needed to continue and further this ministry. Thus we are regularly asking for your participation in this ministry financially as well as prayerfully. You are trusted partners.

We admit to you that we have run out of money for the China Vision. We also need support for raising up and training Chinese-speaking faculty to respond to the many invitations we are receiving from Taiwan as well as from China to teach Dunamis on site.

Without granting Satan more power and authority than is his, we know and sense his efforts to thwart our efforts. It is clearly not in his best interests for these materials to be developed and disseminated. Join us in prayer of spiritual warfare to prevent his interference.

Lastly, let us bring our Christian brothers and sisters in China before the Father in prayer.

We have heard that there are several areas where they are undergoing a season of heightened persecution and oppression. The government is trying to shut down churches and slow the rapid growth of the Gospel. Pray their efforts will fail. Pray their failed efforts will simply give the Holy Spirit more opportunity to advance the Gospel of Jesus !