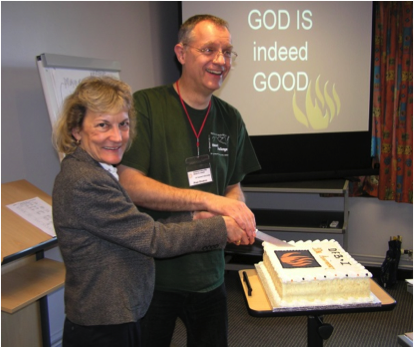 This meeting marked the 10th anniversary of the DFB&I and we celebrated by looking back at all the Lord has done in and through the DFB&I over this past decade and praying about the future of the Fellowship. 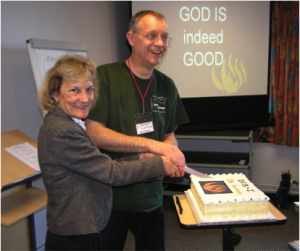 And what would an anniversary be without cake and a party? Friday night Paul and I “cut the cake” together marking 10 years for the DFB&I.

About 33 people gathered for 4 days.

Back to Basics – Reviewing the Ten Tenets of the DFI

The leadership team invited Andrew Willet, Jon Sermon, Bernard Fidder and Paul Stokes to take us through the 10 Tenets of the DFI, reminding the membership of who they are and what they have committed themselves to fulfill.

This was a good review for all of us, and delegates really enjoyed the teaching. This experience has led me to write up a clarifying summary of the tenets that will be available to all the members of the DFI.

The more we grow and move away from the founding of the Fellowship, the easier it is to forget the basics! No wonder the Father tells us over and over to “remember”.

We heard reports and prayed about all the current activities in the UK from the Dunamis Projects in process and planned, to Upward Challenge, to Living Waters and the recently completed Advanced Course on Healing and Deliverance.

There have been 9 Dunamis Projects in the UK since 2000 when the first Project came to High Wycombe sponsored and supported by City Temple and GEAR. The founding leaders of the DFB&I were part of that track: James Gray, Cathy Clarke and Paul Stokes.

More than 400 participants have been engaged in the Dunamis Project over this past decade and those in leadership have been raised up through these Dunamis events. DFB&I member James Gray was often quoted as saying, “A leadership development program that doesn’t develop leaders is an oxymoron”.

What a joy to see that leaders are being raised up and new people are joining the fellowship and growing in their gifts! 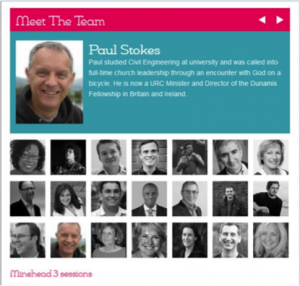 Cathy Clarke was thanked and honored for her 10 years of service on the team as she stepped off.

We also commissioned Bernard Fidder for his work as track director at the new Dunamis Project in Ashburnham Place in Battle which commences in November, 2015 in Sussex.

Pauline Eyles was commissioned for the Deepening in Prayer event which will be held June 17-21 at Kings Park.

Paul and I (Cindy) were commissioned for teaching “Growing the Church” material at Spring Harvest, which is April 6-10. This is an amazing open door into a whole new community of believers who are open to the work of the Spirit and most of whom are not in the URC.

Saturday afternoon Hilary Clark shared mission opportunities with the Fellowship – making us more aware of the international scope of our ministry.

It was inspiring to hear how the Lord is using Dunamis in Nicaragua, Japan, Indonesia, and Haiti (to name just a few) and there is prayer going on for work in Israel and many other places. The DFB&I is part of a much larger body and it was good to hear the stories and have our world expanded.

To learn more about the Dunamis Fellowship International or to pray about whether God might be calling you to join your regional expression, please follow the link below.