Behind the Success of a Dunamis Project

In late October, the Dunamis Project launched in Montrose, PA in obedience to the Holy Spirit continued with the fourth event, The Healing Ministry of Jesus.

Directed by Denny Finnegan, the purpose of this event was to allow participants to both receive the healing ministry of Jesus and to be a vessel for the Lord to minister through them.

All told about 71 people, including the leadership team, attended this event.

Teachers From Near and Far

The teachers for this event were a mixture of local pastors who have previously been involved with the Dunamis Project and PRMI regulars.

Local teachers included Trevor Payton, a Christian Reformed pastor from NJ who taught at Gateways in Montrose in 2014, and Linda Ruby, a retired PCUSA pastor from Pittsburgh who mentored Denny in healing prayer at the Lake George, NY Dunamis in 1991.

Coming from farther afield to teach in Montrose was Frank Drake, another retired PCUSA pastor based in VA who has done extensive work with PRMI both in the U.S. and in Indonesia.

When asked what aspect of the track was most significant to him, Denny pointed not to one specific point in time, but to two ongoing qualities that made a significant contribution to the power of the event.

The first was their intensive intercessory prayer covering.

Cindy Smith was in charge of organizing the intercessory prayer months in advance of the event. She and her team of intercessors set up a rotating schedule to ensure ongoing, seven days-a-week prayer, then met once a month to pray as a group. During the event itself, there were both on and off-site intercessors providing a foundation and covering of prayer. 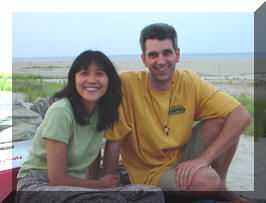 David DeForest and his wife, Chie

The second quality that was particularly outstanding about this event was the worship. Led by David deForest, an RCA pastor from NJ, the worship prepared people to receive ministry and to minister to each other through prayer. The worship also provided a context of praise and power in which prayer and ministry could take place, unifying intercession, healing, and teaching under the anointing of the Holy Spirit.

Commenting on his own experience as track director, Denny enthusiastically declared, “Oh, I love it!” He goes on to say that while he has held the majority of leadership roles that PRMI designates for events, he feels that the role of track director most closely matches his gifting.

Unity and Submission to Christ

As the director, he has the opportunity to shepherd the leadership team into greater unity in Christ and submission to Christ so that the Holy Spirit can work through them more powerfully. A key component of establishing this unity and effectiveness are three submissions that Denny and the leadership team declare at the beginning of each event:

These three submissions help to prevent division among the different areas of ministry, establish right from the start that Christ is the center of the event, and lay a foundation and context for the Holy Spirit to work.

Stories of the Dunamis Project.

So many were blessed at this event! Below are video testimonies from participants who want to share with you how the Holy Spirit worked in their lives through Dunamis Project 4: The Healing Ministry of Jesus.