At the Advance Course on Healing and Deliverance in Northampton, UK , we witnessed Jesus Christ working in and through the groups in power in a number of major deliverances that took place.

The teams were led by the Holy Spirit to discern the presence of evil spirits and then cast them out.  We want to tell you the stories.

In one situation a number of evil spirits had entered the person, including spirits of deception and fear. When the ground of entry was removed through inner healing they were cast out. The final evil spirit to be exposed and expelled was a demon of death. When this demon was confronted it manifested its presence by what actually felt like the person dying.

The point person in the deliverance persisted in the power and authority of Jesus Christ, the death grip was released and the demon left. Then the whole team moved into a time of exalted praise of Jesus Christ and affirmed that there is life in Jesus!

While we did not record the actual deliverances – we have found that it is generally better not to put this on video – the debriefings were videotaped offering a rare opportunity to hear from the “inside” what the person being prayed for was actually experiencing.

It was most instructive and glorifying of Jesus.

What was also helpful was hearing from the prayer team members how they were reacting to the presence of evil spirits and how they were being led by the Holy Spirit to engage.

In the debriefing of the prayer session expelling the demon of death, the demon made a counter attack to try to get back into the person.

However, they resisted and this time the whole group moved into a time of prayer and praise affirming that Jesus is the way of life.

This was an incredible learning experience for us all. The event was also more than just a useful teaching experience, it was an actual engagement in advancing the Kingdom of God to the glory of Jesus Christ.

We saw clear evidence of the reality of evil spirits, but more the reality of Jesus Christ who defeated Satan on the cross and sets the captives free.

Part Two of the Advanced Course on Healing and Deliverance 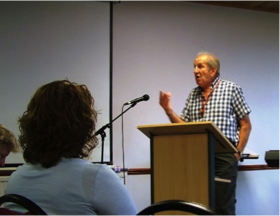 All this and much more took at the Part Two of the Advanced Course on Healing and Deliverance.

This is the first time this course is being offered in the UK; it has been offered in North Carolina (NC) six times in the past 10 years.

This is part of a yearlong training that began in November, 2013.

The afternoons were spent in small groups where each student had the opportunity to put into practice what they were taught in the morning. 12 students were divided into 4 groups, each with a designated mentor who has extensive experience in prayer ministry.

Each group also had an intercessor who was present for all prayer sessions as well as the morning teaching.

Over the past 6 months these small groups have continued to meet. Some over Skype, some just through group emails, but all have been encouraged to be in regular contact with their mentors. They have been engaged in reading and reflecting on books and working on a project in their local context.

July 8-12 they came together for the second face-to-face part of this course. In this week the teaching was topical, drawn from subjects the students asked to hear about. Time was allotted each day for practice in small groups, but most of the time was spent in lecture and discussion.

Each time we offer this course Part 2 is slightly different, because we try to tailor it to the needs of the particular group. This group requested more teaching on deliverance ministry and discernment. Brad Long joined me and the local team and worked through a series of very practical topics. 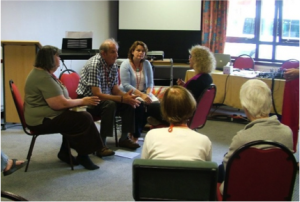 We were given some live cases to debrief, which made the teaching very fresh and relevant. The other topics presented were praying for children and young people, healing from addiction, healing from wounds sustained in the womb, healing from sexual abuse and healing from grief (with a focus on miscarriage and abortion).

This group will meet again in late October.

The students will present their projects and have a graduation service. This time will be followed by an opportunity to participate in Living Waters, the UK equivalent of our Healing Week at the COC. Here they will be given the opportunity to be on prayer teams and put into practice what they have learned over the previous 12 months.

Katy and Graham Hill and Pauline Eyles were students in the 2010-2011 Advanced Course in NC.

At that time they were planning on launching the course in the UK and came to learn and make the transfer “across the pond”. Vernon Payne was part of the 2004-2005 Advanced Course offered in NC and returned a year later to be a mentor in the course. They have worked together for several years to prepare for this class and their work and prayer was certainly evident. 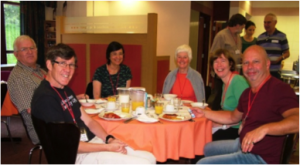 I am delighted with what I experienced in Northampton.

The students have grown in their ability to engage in healing and deliverance ministry and a very effective team of prayer ministers is being raised up for the UK.

I was also impressed with the leadership and teaching that I observed. This is the first time this course has been taught outside the US. I hope that others will learn from this model and that we will see this course offered in other locations.

I am currently receiving applications for the next course to be offered in NC. I still have space in the course for more students. We will meet at the William Black Lodge, Sept. 14-19th, 2015.

If you want to hear from students who participated in the last US event, click here.