A Salute to Tom Manetsch – by Carter Blaisdell

He was born 21 January, 1932 in Spokane, WA.  He married Edna Elise Christensen of Albuquerque, New Mexico, in 1955 in Subic Bay, Philippines, while on active duty with the US Navy. 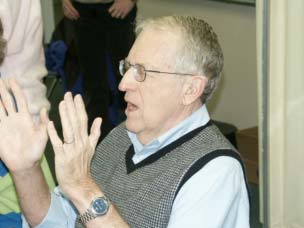 Tom, Ph.D., Oregon State Univ., retired after 28 years as a professor of Systems Science and Electrical Engineering at Michigan State Univ.  He was an Elder in the University Reformed Church, East Lansing, MI, before retiring to Delavan, Wisconsin, in 2001.

He served on the Board of Directors, Presbyterian Reformed Ministries International in the late 1990’s.

In 1999 he became the Director of the ministry’s Spirit Alive program for congregational renewal.

More importantly than being a scholar, he was a man of prayer.  He spent many hours each week seeking the Lord’s will and then doing it.

As a Spirit Alive coordinator, he had the ability to give minimal instructions in order for the visiting team to have more time to pray.

A witness to the resurrection and celebration of his life took place at Creek Road Community Church, Delavan, and at University Reformed Church, East Lansing, on Tuesday, 4 January.

Tom was an anointed man of prayer. When he was on the PRMI Board of Directors he was constantly calling us to the work of prayer. He believed that was the most important work of the Board. 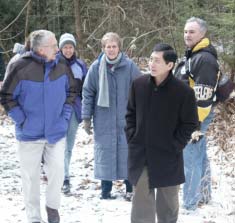 Tom with other PRMI board members seeking the Lord\’s guidance

L to R Tom Manetsch, Jane Vanderplug , Marge Van Meter, John Chang and Denny Finnegan walking the land for the Community of the Cross in the snow. The Board was seeking guidance, “Is this the place?” 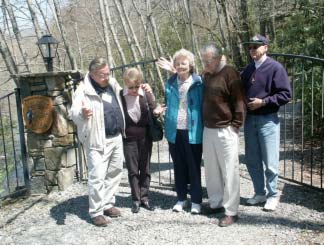 L to R Mike and Bonnie Schrowang, Edna and Tom Manetsch and Larry Selig praying outside the gates for the 24 acres to be given to PRMI for the Community of the Cross. God answered their prayers and the gates opened!

Tom was one of the main intercessors for the birthing of the Community of the Cross.

In later life he was constantly called to “stand in the gap” for an outpouring of the Holy Spirit in revival in congregations and on college and university campuses that once had Christian roots. I believe our present work and development and worldwide reach goes right back to the intercessions of Tom and other great saints who have gone before us.