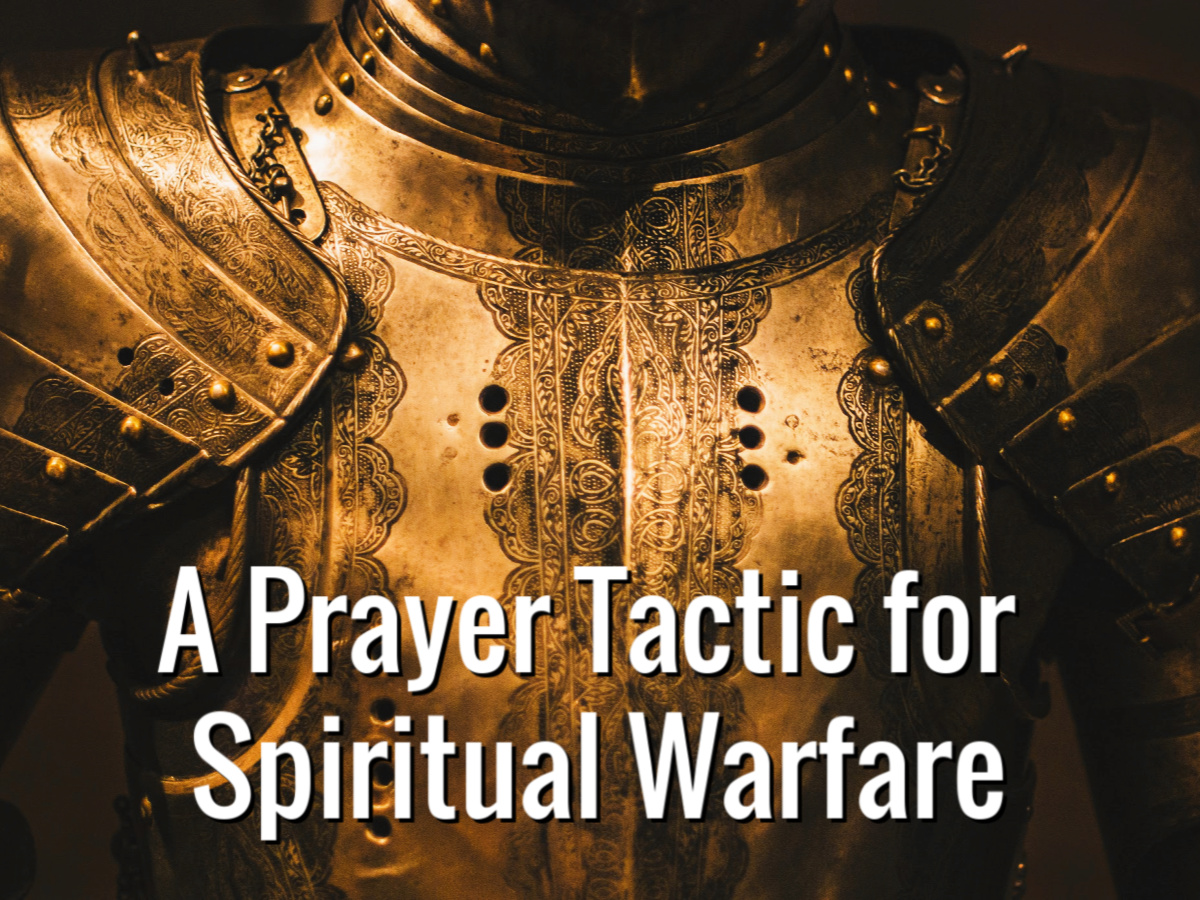 One of the strategies which the enemy uses to conceal his work is cloaking. By understanding this idea, intercessors involved in spiritual warfare against demonic strongholds will discover a prayer tactic for spiritual warfare and strategy to pierce the cloaking.

Cloaking is a term we use to describe the way that the enemy hides his real plans and intentions in individuals, in the world, and specifically in the strongholds constructed to hinder the advancement of the kingdom of God.

The science fiction series Star Trek illustrates the concept of cloaking well. Starships used by the Romulans in the show can disappear from all sensors by deploying a cloaking device. It means the starship cannot be tracked.

Similar illustrations within fantasy stories talk about invisibility cloaks that hide a person. This illustrates the concept of cloaking.

In our experiences in spiritual warfare intercession, we have observed a similar concept in the way the enemy attempts to blind people to the existence of the stronghold.

Is cloaking a Biblical concept?

The term cloaking is not used in Scripture to describe any spiritual warfare, but we see the concept in various places where people cannot see the truth or see reality. We use the word to name the idea.

The concept of people being blinded to reality and the truth runs through the Biblical narrative.

1. When the King of Aram surrounds the city of Dothan, with the intent of killing Elisha, Elisha’s servant is filled with fear until Elisha prays for his eyes to be opened:

“Open his eyes, Lord, so that he may see.” Then the Lord opened the servant’s eyes, and he looked and saw the hills full of horses and chariots of fire all around Elisha.”

2. There are times when the Lord hides and protects believers. As Psalm 91 reminds us:

“Whoever dwells in the shelter of the Most High will rest in the shadow of the Almighty.“

3. In the story of the Lord opening the eyes of Elisha’s servant in the next verse in we find the Lord bringing blindness in order to protect His prophet:

“As the enemy came down toward him, Elisha prayed to the Lord, “Strike this army with blindness.” So he struck them with blindness, as Elisha had asked. Elisha told them, “This is not the road and this is not the city. Follow me, and I will lead you to the man you are looking for.” And he led them to Samaria.”

4. As the early church formed, there were times when the Lord provided this strong protection through cloaking.

The Lord cloaked Peter during his escape from prison in Acts 12. He was able to walk right past the guards to his freedom and avoid being killed by Herod. The Lord protected him so that he could continue to share the good news of the gospel.

5. In the same way, the enemy copies and corrupts what God does. The Apostle Paul, writing to the church in Corinth about the gospel, says:

“And even if our gospel is veiled, it is veiled to those who are perishing. The god of this age has blinded the minds of unbelievers, so that they cannot see the light of the gospel that displays the glory of Christ, who is the image of God.”

The enemy can blind people’s minds.  This blindness, which we are calling cloaking, protects the formation of spiritual strongholds.

This cloaking is used by the enemy to entrap people within the stronghold structure.

But it is also used to prevent those who might be able to destroy the stronghold during its fragile formation from recognizing it and acting against it.

How does cloaking work in spiritual warfare?

The enemy uses cloaking to protect and hold a stronghold together. This demonic cloaking works from within the stronghold and from without.

Inside the stronghold, the cloaking functions as a powerful delusion (2 Thessalonians 2:11) through which the enemy darkens people’s minds to prevent them from seeing reality.

“For this reason God sends them a powerful delusion so that they will believe the lie.”

It also works to maintain a culture within the stronghold, which prevents critical thought or criticism of the structure.

It will work in a variety of ways to enforce the deception that is present, thus entrapping people within the stronghold.

On the other hand, those who could expose or destroy the stronghold are blinded to its presence. They are unable to act against it.

The enemy deploys a variety of tools to maintain this cloaking such as secrecy, distortion and the utilization of worldviews that don’t recognize the presence of evil spirits.

All of this combines to prevent people from seeing what is going on.

Where Does Cloaking Happen?

The demonic cloaking works on both a spiritual and a human level.

Spiritually cloaking works as a powerful delusion (2 Thessalonians 2:11), which can feel like being in a fog.

On the human level, cloaking often works through the creation of worldviews that deny the supernatural.

In such cases, the work of evil spirits is ignored and their impact dismissed so that they are quite able to develop and conceal the formation and deployment of a stronghold.

The Place of Cloaking Within a Stronghold

Demonic cloaking is essential to the formation of the enemy’s strongholds.

Since a stronghold that is forming is weak and vulnerable, it needs to be hidden until it has grown strong enough to try and block or hinder the advancement of the Kingdom of God.

The result is that it is not possible to see what is going on without a prayer tactic for spiritual warfare.

The impact of this demonic cloaking is seen in the classic case of the stronghold of Nazism.

In the early 1930s, the threat of Nazism was not recognized. Many welcomed the system and saw it as a solution to the problems of the day.

Few people could see the danger that was present. Some like Winston Churchill or the intercessor Reese Howells did, but their voices and opposition were often rejected and ignored. People were not able to see past the cloaking.

This resulted in the stronghold becoming so powerful that the military action of World War II was necessary for its destruction. (Even though the stronghold of Nazi Germany was defeated, the stronghold is still present in our world today.)

In a congregational context, this demonic cloaking can hide the work of the enemy so that only the external expressions of a stronghold can be seen.

Marriages within a congregation could be recognized to be under stress.

Still, it may not be evident that the enemy is seeking to establish a stronghold against marriage within the congregation.

The natural response could be to develop a marriage program within the church, which, while helpful, would not address the underlying spiritual warfare issue that is taking place.

In another example, there could be continual tension concerning the worship style within the congregation, which could be purely due to human preference and human sin or could be symptomatic of something more sinister happening spiritually.

Four main prayer tactics can be employed to pierce the cloaking around a stronghold.

These prayer tactics should be pursued at the leading and direction of the Holy Spirit.

The first tactic is to pray for an expanded worldview.

Our worldview determines how we see and appreciate the different aspects of reality.

It is often necessary to ask the Holy Spirit to expand our worldview, especially for those who have grown up in a predominantly western/scientific worldview system.

This system denies the reality of the supernatural and the spiritual realm thus overlooking the existence of evil spirits and their influence and role within a stronghold.

The expansion of worldview takes place in several ways.

Sometimes the best way to expand or stretch our worldview is to step out in obedience to the Holy Spirit and engage in a spiritual battle. During a struggle, we often experience both the power of God as well as the evil of the enemy.

Watch: The Shape of our Worldview

The second tactic that can be employed is to pray that the Lord would raise and appoint specific individuals, who are equipped to penetrate the demonic cloaking and reveal the truth of a stronghold.

Rees Howells and Winston Churchill are examples of an intercessor and a politician who the Lord used to expose the reality of the stronghold of Nazism.

The Lord can use anyone in this role, and once they have been identified, praying for their protection is crucial as they will come under attack for naming the evil that is present.

It’s also important to pray that people will hear the truth as it is spoken out.

In PRMI, we use a group of intercessors in a prayer cohort.

The third tactic is to pray for the Holy Spirit to open eyes to see and to give the gift of discernment.

There is a certain amount of human rational thinking and analysis which can be brought to bear when looking at a potential stronghold.

This is especially true around the areas of cloaking.

Yet it is also essential to have intercessors with the gift of discernment of spirits, which may be very helpful in identifying and even naming the evil spirits who may be present within a stronghold.

4. Command the Demons to Reveal their Presence and Intentions

The fourth tactic is to command any demons that are within the stronghold to reveal their presence and intentions by using this prayer tactic for spiritual warfare.

At times it can be challenging to determine whether demonic spirits are behind the physical behavior that is observed. This is due to cloaking.

It is necessary to decide on whether it is demonic activity or merely human sin behind what is taking place, as this will shape the tactics and strategies needed to deal with the stronghold.

By commanding the demons to reveal themselves, it becomes possible to determine whether there is a demonic component to the stronghold, and the cloaking is effectively pierced.

This approach is developed from personal deliverance ministry, where a commanding prayer is used to force any evil spirits into the light and thus reveal their presence and possibly the grounds they have to be demonizing a person.

The response is seen and often felt by the individual and the prayer team.

In the case of a stronghold, the presence of demonic spirits is often revealed through a revelatory event.

After commanding the evil spirits in a stronghold to reveal their presence and intentions, there may be an event that occurs that shows or reveals the work of evil behind the stronghold.

It could be a statement made or an act that takes place, which clearly shows the evil present.

Praying for the cloaking to be pierced is a priority at every level of spiritual warfare.

As we continue to pray to pierce the cloaking, the real motivations, agendas and tactics of the enemy and the humans he is using will become clear.

Then we can cooperate with the Holy Spirit, to do our part in demolishing the stronghold by using this prayer tactic for spiritual warfare.