A New Wave of the Holy Spirit in Taiwan, Reaching to China

Jonathan Edwards observed that the way the Kingdom of Jesus Christ is advanced is through waves or pulses of the Holy Spirit moving through human history.

We see this dynamic of how God has chosen to work in the book of Acts as the Gospel advances in outpourings of the Holy Spirit starting in Jerusalem and going to the ends of the earth.

Each of these waves is embodied in particular people such as Peter breaking the barrier between the Jews and the Gentiles, Philip in Samaria and to Ethiopia, and Paul to the Roman world.

This understanding of how God works provides a framework for what John Chang, Josh Modrzynski, and I experienced when we went to Taiwan November 28 – December 7th.  We went to preach in a local church, to do an introductory Growing the Church in the Power of the Holy Spirit equipping event for pastors, and attended some larger gatherings to teach on the Baptism with the Holy Spirit.
Hear about a recent trip to Taiwan, then read more about it below.

Saying Good Bye to Elder Howard Chow – The Embodiment of the 1980’s Wave of the Holy Spirit. 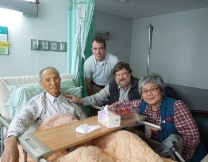 I was actually packing and preparing to leave for Taiwan when I got the call that Howard Chow was gravely ill with liver cancer.

Howard was my coworker in the 1980’s when I was in Taiwan building the Lay Training Center and leading renewal events all over Taiwan.

God gave Howard a powerful vision of not only renewing the church in Taiwan but also of reaching out to China and to Japan.

Because of his great organizational gifting as well as significant financial resources as a Christian businessman, he provided the human means for me to follow the leading of the Holy Spirit in providing equipping and renewal events in Taiwan (and years later in China and Japan).

Howard went with me on a number of trips and backed me up in prayer, in ministry and in giving powerful testimonies of the work of Jesus Christ He would also pay for everything!  God used these ministry trips to ignite rivers of the Holy Spirit in Taiwan, mainland China and in Japan.

When I arrived at his bed side in the hospital, his wife and four children were there with their families to say their good-byes. Howard was very weak, but filled with joy, and an unshakable commitment to advancing the Kingdom of God.

The fruit of Howard’s life of faithfulness to Jesus Christ was physically there in the room: a son and a daughter in ordained Christian ministry, one daughter working for an international Gospel ministry located in Canada, his other daughter living in a wonderful Christian family.

Also present were Charity Chen, an ordained Presbyterian minister and a leader in that first wave of the Holy Spirit (for Howard she was a spiritual daughter), my son-in-law, Josh (a seminary graduate) and myself. 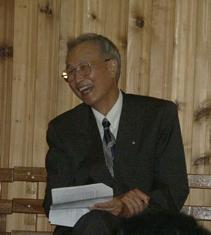 This is the way I remember Elder Howard Chow, filled with the joy of the Lord. Pictured here at Jesus Abbey in Korea, in 2002

Howard asked if I would sign and read to his gathered family his “last will and testament” (the document contained Howard’s final words of blessing for his family).  He then asked me to pray for each one with the laying on of hands and anointing with oil, for Christian service and for moving into the future.

And then, most precious of all, he laid hands on me and he prayed a prayer of commissioning for me to continue God’s work in Taiwan, Mainland China and Japan.

Howard’s last words to me were, “Go follow Jesus Christ. Trust Him completely, and just go do it!!! Go do it!!”

With that I felt the anointing of the Holy Spirit come upon me to fulfill the China vision.

A few days later, Howard died peacefully, welcomed by Jesus Christ and wrapped in the warm embrace of his family.

In 2002 I lost my spiritual Father, Archer Torrey.

In 2010 I lost my mother who was the one who led me into the work of prayer.

Now I am truly bereft, as I have lost my elder brother in the Lord and strong co-worker for Taiwan, China and Japan.

A new wave of the Holy Spirit building on the 1980’s wave! 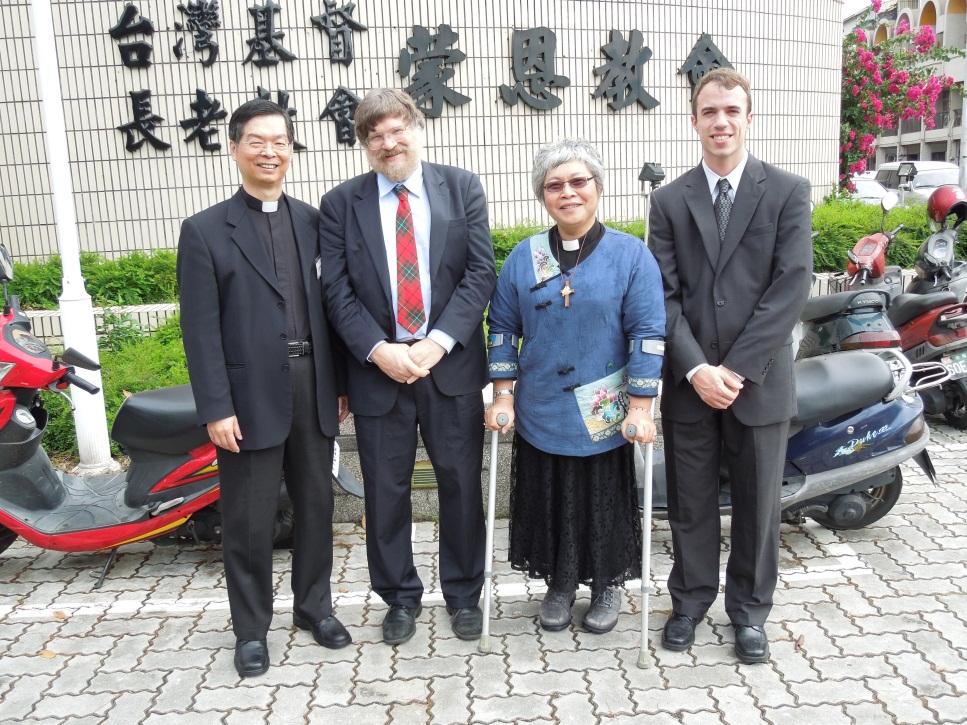 Now there is a new wave of the Holy Spirit taking place in which PRMI has been called to take part.

The day after this meeting with Howard, Josh and I preached at the Grace Presbyterian Church. Charity Chen translated for me from Mandarin into Taiwanese and for Josh from English into Mandarin.

Charity has been afflicted with polio and is in a wheel chair but that morning she was so filled with the Holy Spirit that she was able to stand for two services and extended ministry afterward.

The next day John Chang and Brother Lee flew in from China to join us for the Growing the Church teaching that started Monday night in Taichung.

We met pastors and congregations who were growing in the Holy Spirit both at this church and at the Jung Shau Road Presbyterian Church where the pastors’ conference took place. 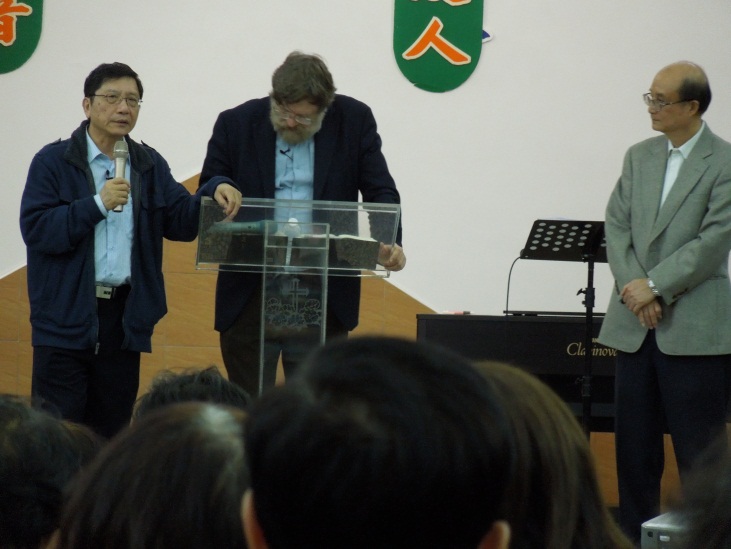 L to R, The Revs. John Chang and, Brad Long, with The Rev. Wang, pastor of the Jung Shau Road Presbyterian Church, leading in prayer

Yes, there were many of the same manifestations, the Holy Spirit worked in healing and deliverance and a younger generation was being filled with the Holy Spirit, but there was a shift of focus.

It is now time for Taiwanese Christians to step into their role in the great worldwide movement of the Holy Spirit, especially to equip leaders for the exploding church in China.

For those who know that Taiwan Christians, especially Presbyterians, have been focused on Taiwanese independence, this willingness to say “yes” to the call to engage in this work of seeing China transformed, is a profound shift.

Indeed Taiwan has invested billions of dollars in China building factories and along with the dynamic Christian population of Wenzhou province in China, have been the drivers of China’s economic development.

Now the call is for Taiwan to join with the Koreans to be a part of the advancement of the Gospel of Jesus Christ and the building of the Kingdom of God in China.  Taiwan is also uniquely situated to continue to connect with the move of the Holy Spirit in Japan.

I could tell many stories but one incident which revealed clearly that times had changed and that there was vast new opportunity for connecting with the move of the Holy Spirit in China.

When I was there in the 1980’s there was an “iron curtain” and impassible divide of hostility between Taiwan and Mainland China.  No one could cross over this barrier.

But now to my astonishment, every day I was in Taiwan, 3 to 6 tour buses pulled up to our hotel packed with tourists from Mainland China.  They were coming by the droves and can freely enter Taiwan!  And there are direct flights from Taiwan into nearly every major city in China.

As I looked at these packed tourist buses and heard the Taiwanese church leaders say “yes” to being a part of the next great wave of the Holy Spirit, I heard the Lord speak to me saying, “The vision I gave you of equipping centers in Taiwan and Hong Kong, that will provide the equipping of anointed leaders who can establish Dunamis Equipping Schools all over China and the rest of the Chinese world, is from me and I am going to accomplish it.”

And in the words of Howard Chow, I knew the Lord was saying to me, “Trust me, obey me, and JUST DO IT!”

He also said, “You will be standing with brothers and sisters from Taiwan, and the USA, Canada and the UK, to be one of the means, to play a unique role, in bringing this next wave. Just do it!”

We have received an enthusiastic invitation from the largest congregation in Taichung to start a full Dunamis Project Track in May or June, 2013. This would be the first center for equipping and the beginning place for fulfilling the vision of creating the materials and the anointed leadership for developing Dunamis Equipping Schools for congregations in Taiwan and China.