A House of Prayer: The Dedication of the Sheepfold Prayer House 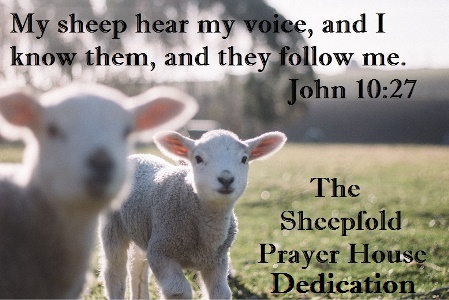 On Tuesday, August 16, PRMI board members, partners, volunteers, and friends of the ministry gathered from around the world to celebrate the realization of a vision that is the fruit of years of prayer and planning.

On that warm August afternoon, the house filled with friends and neighbors, the Leadership  Team and Board of Directors of PRMI dedicated this house of prayer to the Lord. Executive Director Brad Long was the first to speak, welcoming all those present and honoring the late Beth Osgood, whose generosity and obedience to the Holy Spirit played a key role in making this vision a reality.

For several years, PRMI staff and partners have been praying for the ability to build a house for prayer, service, and hospitality, thereby expanding the work of equipping and empowerment that the Lord is already accomplishing through this ministry.

In December, 2014, PRMI staff held a two-day prayer time focused on asking the Lord how to proceed with this vision.

Rather than encourage them to raise the funds to build, the Holy Spirit directed the ministry to focus on equipping, saying, in Brad Long’s words, “Focus on equipping the people needed to take this teaching on the Holy Spirit both worldwide and to future generations. Continue to put the teaching in forms that can go to the ends of the earth so that millions of witnesses to Jesus Christ will be empowered and sent!” The Lord also indicated that if PRMI would walk in obedience in this work, the funds would follow in God’s timing.

Enter Beth and Dick Osgood, friends and neighbors of PRMI for many years. From their home in Laurel Ridge, they served the Lord with a ministry of hospitality, often hosting event teachers and leaders for PRMI. They also shared with Brad their love for Israel and the Jewish people, ultimately encouraging the connection between PRMI and the Messianic Jewish ligament of the body of Christ.

Building a House to Provide Space for God’s Work

After her husband, Dick, passed away, Beth’s heart’s desire was to move back to Black Mountain and to continue their ministry of providing space for God’s kingdom work in her home. She began plans for building a house that she would live in on their lot just outside of the Laurel Ridge gate. She also continued to partner with the work of prayer at the COC.

Shortly after this, she was diagnosed with cancer. We all joined with her in praying for her healing. In the meantime, she felt–and I witnessed to this–that she was to “stay the course” of building the house that she planned to move into.

Brad shared the story with us in these words:

“Last June, while I was on a mission trip to Taiwan, I had a very strange experience. I was in jet lag and so woke up early one morning with an urgent leading to call Beth Osgood immediately. I argued with God about this as my habit is to call my wife Laura first thing every morning that I am away. The Spirit said, ‘No! Call Beth Osgood first!’ I argued further, ‘Lord, how about a shower so I can be a little more awake?’ The response was, ‘NO! Call Beth Osgood NOW!’ ‘Lord, how about checking my e-mail so I can verify that it really is important to call her?’ ‘NO!!! Call her NOW!’ said the Lord.”

Confirmation of the Vision

“So I did, and when she answered she said, ‘Oh, thank you for getting back to me and for responding to my calls to your home and the emails I have been sending.’ I said, ‘Beth, I am in Taiwan. I just woke up and have not checked e-mail nor called home, so I have not gotten any of your messages. The Holy Spirit moved me to call you right now and so I have just obeyed.’ Beth’s response was, ‘Well, that is a strong confirmation that the guidance I am getting really is from the Lord! Thank you for listening and obeying the guidance of the Holy Spirit. That is all I need to know. We can talk about it when you get back.’ She hung up.”

“When I got back, Beth and I met at the Community of the Crosswith Kay Blaisdell, and Beth said she was still believing for her healing, but that the Lord had told her that she was to consider giving the house she was building for herself to PRMI. This was the first conversation that we had together, and there were many more to follow as the vision of the house was refined to both fulfill the vision of she and her husband and also be consistent with vision of the Community of the Cross as a place of encounter with Jesus Christ for prayer, equipping, and sending.”

“This was all finalized and put into the will when I drove down to Durham where she was in hospice care. This was done in the presence of her oldest son representing her family, who were all 100% supportive of her bequeathing the lot, the house plans, the furniture, and the money needed to build the house.”

The building site before the Sheepfold House was constructed

“This extraordinary gift is part of our overall development plan of building the Community of the Cross where the work of prayer, equipping, and sending can take place to advance the Kingdom of God worldwide.”

Martha Server, fellow Laurel Ridge resident and Beth’s partner in prayer, was the next to speak.

She shared that, before the house was constructed, PRMI frequently asked our neighbors at Laurel Ridge to host these visitors and speakers, so many people knew that this was a real need of the ministry. Beth, Martha, and their friend and neighbor Kay Blaisdell discerned in prayer that this house should be called the “Sheepfold Prayer House”, as they continually received scriptures about sheep and sheepfolds.

PRMI Board President  Martin Boardman was the next to speak, praying a blessing over the house in Hebrew and asking that it be a place of peace and prayer. After Martin’s blessing, Brad invited several attendees from around the world to pray. In a beautiful reflection of the international vision and purpose of PRMI, the Sheepfold House was blessed in six languages, including English, Chinese, Spanish, Hebrew, Swahili, and Luganda.

A Harvest of Joy

Next, the guests at large were invited to pray, offering many sweet prayers of blessing and thanksgiving. After Cindy Strickler, Director of PRMI, closed the time in prayer, everyone sang “Joy to the World” in spontaneous and beautiful harmony, praising God for His faithfulness, provision, and Lordship. After joining in song, PRMI staff, board members, and guests enjoyed refreshments served by Suzi Gibbs and a time of joyful fellowship.

Praising God for Partners and Provision

Please join us in praising God for the life and obedience of Beth Osgood, the international community of PRMI, and the asset the Sheepfold House will continue to be to our ministry of equipping and empowerment. Pray with us that this gift will be a place of peace and prayer  that fulfills its role in the advancement of the kingdom of God.