A Church Being Restored in the Power of the Holy Spirit

Over the last three and a half years, PRMI has been conducting a Dunamis Project  in Chinese and English at the Winfield Reformed Church in Flushing, New York.  Our congregation, now known as the Grace Reformed Church, is a fellowship of  Taiwanese Christians.   We have been permitted use of their facilities because the once thriving congregation of several hundred, devastated by internal conflicts, has shrunk to only 20 members.  That tragedy has meant availability of space and time for us to conduct Dunamis there.  Still, the elders had reason to hope the Lord could revitalize the congregation.  They are located among a large population of Taiwanese people with whom to share the Gospel and thus rebuild their congregation.

The following is an English transcript of a testimony given in Mandarin by the Rev. Mwo who bears witness to the power and grace of God as He works to restore this congregation.

How to account for this congregation’s struggles, loss of spiritual vitality and membership?  Of course, human sin played a role. And there were some long-standing problems in the congregation which had never been dealt with.  The context of this more than a hundred and fifty year old church may also have something to do with it.

First, understand the circumstances.  This beleaguered church is located in an area of great ethnic diversity.  There is a large Chinese Buddhist Temple down the road, a Hindu Meditation Center up the street and a Muslim Mosque within a block or two.  When you enter the neighborhood, you notice the vibrant cultural diversity immediately.  The spiritual oppression is also unmistakable.   Human sin and demonic influences have crippled the congregation.

These other non-Christian populations in the area are, of course, open doors for demonic powers.  At the same time, the climate presents huge opportunities for the Gospel of Jesus Christ. The whole world surrounds the church, right out the door step.  And yet,  witness for Jesus has been so compromised by infighting and spiritual attack from without that there has been little or no energy for outreach, even to our most immediate neighbors.

Three years ago,  PRMI started to use our facility to conduct the first Dunamis retreat, Gateways to Empowered Ministry.  The intercessory prayer team spent much time praying to cleanse the building spiritually.   Also, a number of the people participating in the Dunamis track, who were from Taiwan and China, felt the burden to pray for the church.   Two of the elders of this congregation also took part in the Dunamis track and were greatly encouraged.

Then, the Rev. John Chang received the clear direction from the Lord to offer to meet weekly with these two elders just for prayer.  Over two years they prayed together.  Given Rev. Chang’s incredibly busy schedule of taking care of four other congregations and doing mission trips to China, Japan and Taiwan for PRMI, this represented a major expression of love for this congregation.

The central focus of their prayers was to ask the Lord to bring a pastor to them who was empowered by the Holy Spirit and equipped to deal with the major spiritual challenges the congregation faced.  God answered these prayers by clearly extending the call to me and my lovely wife to leave a prosperous growing congregation in Illinois to come to this little church of 20 discouraged people.   Most difficult for my wife was leaving our three grown children behind to come to New York.

The first Sunday at my new call was the week of Gateways To Empowered Ministry, the opening of the second Dunamis track offered at the church.   I had already been filled with the Holy Spirit, and was delighted to find more than one hundred people gathered, including the elders who had helped pray me here.

At that event, there was a tremendous outpouring of the Holy Spirit in which many manifestations of the power and presence of the Lord Jesus were witnessed.  A movement of our God was ignited in our midst!

That was September of 2011.  Now, the week of March 21-24, we returned for the second unit on the Gifts of the Holy Spirit.  The transformation that has taken place in the congregation is amazing.  Healing and restoration is evident.   Some church members, once totally unconcerned with matters of faith, have been filled with the Holy Spirit and are expressing their faith and beginning to grow.  There is such a lively warm fellowship that the congregation has started to grow.  Not just with people from Taiwan but from a number of other Asian nations, people who do not even speak Taiwanese.   Rev. Mwo still preaches in Taiwanese, but the sermon is translated using power points, into English and Mandarin Chinese. 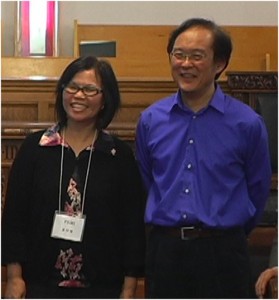 t the Dunamis, Rev. Mwo was a full participant and brought testimonies of the work of the Lord Jesus.  He also thanked PRMI for offering Dunamis at his church.  The invitation from the pastor and the elders is now extended well beyond permission to use their facilities.   They want PRMI to hold Dunamis in their church without charge.  Better yet, they want to become full participants in this equipping process!

By the grace and power of the Holy Spirit, this congregation is being renewed in its witness to Jesus Christ in an area filled with demonic strongholds of Islam, Hinduism, and Buddhism.

This is all from the Holy Spirit who loves the Church.  And, the love and obedience of John Chang and the members of the Flushing congregation who took seriously the challenge to pray for the restoration of this Taiwanese congregation.

The vision that the Lord has given us at the PRMI Dunamis Institute is that well established congregations which have lost their vitality and been compromised in their role in advancing the Gospel can indeed be restored to a powerful witness for Jesus Christ.  This can happen only by turning to Jesus Himself, by becoming grounded in the Bible as the Word of God, and by welcoming the gifts and power of the Holy Spirit.