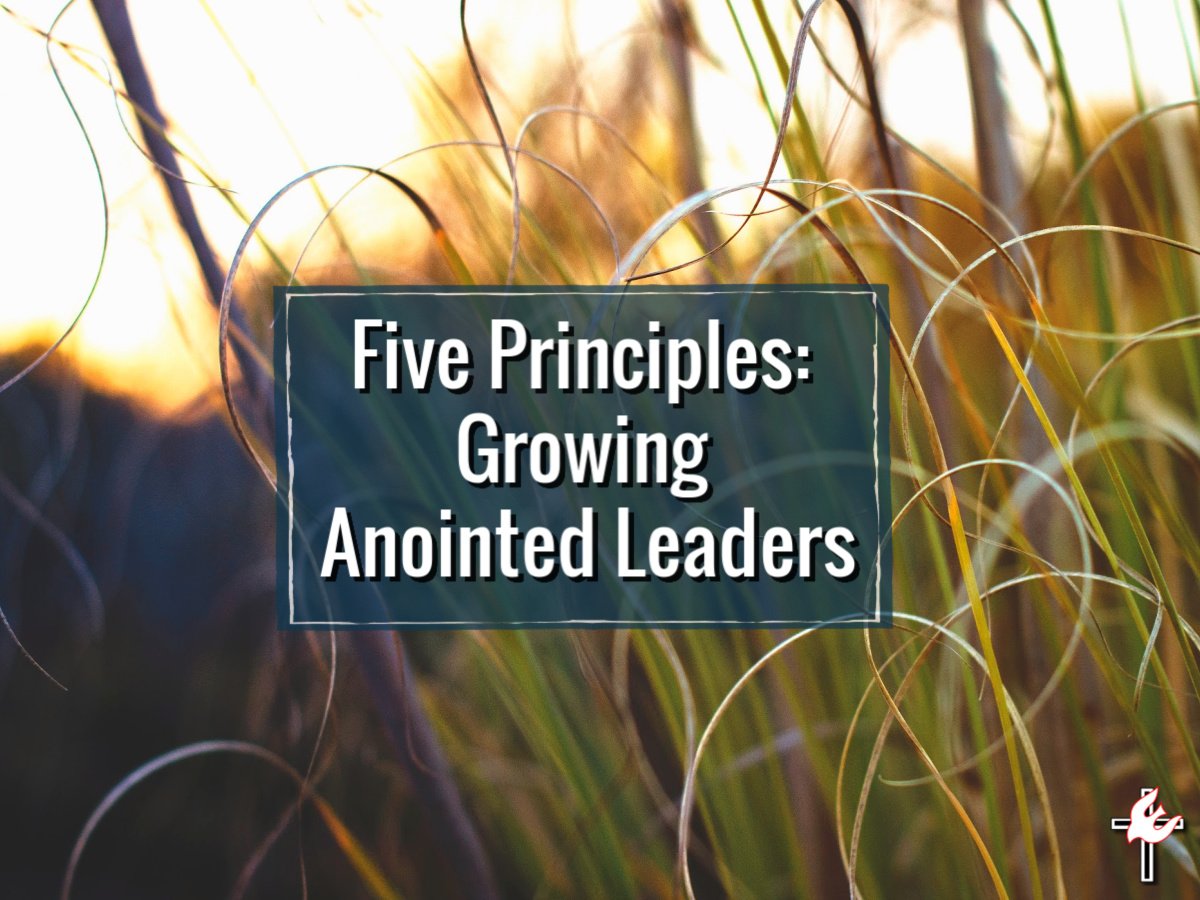 On our recent mission trip to Taiwan, we learned some lessons of how to grow others in anointed leadership that I want to pass on to all of you.

These principles apply to many situations whether you are trying to grow a prayer group, a congregation or a whole movement.

I want to convey these to you by using an equipping event in Taiwan as the practical example.

1. Build trust and a common foundation in following Jesus Christ

You want to build trust among your team on the common foundation of following Jesus Christ so that the Holy Spirit will have the relationship bridges over which to transfer information, vision, as well as the anointing of the Holy Spirit.

On this trip to Taiwan, we really did not know our host, the Christian Women’s Corps, at all. We had met a few of their leaders in 2014 when they came to Taichung to check us out. John Chang had met with them while in Taiwan for his mother’s funeral last January.

When we first arrived in Taiwan they showered us with hospitality.

In Taiwan the love language is giving you 15 course feasts! It was there around the table that we started to develop trust and relationships with the CWC leadership team. It was wonderful! They chose a traditional Taiwanese dinner the first night which was truly an expression of their heart.

If you are going to build trust you must be able to not just read but receive their love language and when working cross- culturally that can mean eating some things that you would not usually eat. Every night we were there we would have supper with the team and each time we met the relationships and trust grew. They lavished upon us some of the best meals that I have ever had.

How trust opened the door to ministry

One evening the husband of one of the leaders was in attendance and as he was sharing some prayer requests and moving into prayer, we had a significant Kairos moment.

To honor confidentiality I will not go into details. Mary Ellen was the one who discerned this moment and we moved from polite conversation and general prayers into an in-depth engagement with the Holy Spirit.

All this sharing meals and having fellowship was critical for what the Lord was doing. It provided the relational bridge for us from America and the CWC leadership team in Taiwan to become one team through which we could start to listen to the Holy Spirit and work together.

2. Model team work and make explicit how the Holy Spirit is at work

Nearly everywhere in the world Church the model of anointed leadership is of the anointed individual providing the leadership.

In the Bible our attention is often riveted on the anointed leader like Peter, Philip or Paul. Individual leadership is critical, but what we often miss is that this individual leadership is supported by a team. Peter is with the other apostles in Jerusalem. Philip calls in the others from Jerusalem to support him. And Paul traveled with a mission team. Jesus, who was the paradigm of an anointed leader, called the 12 disciples and welcomed a group of women to join in his ministry. After Pentecost this “team” became the Church.

This woman’s group had observed the anointed individual model.

They had seen powerful Charismatic pastors who serve the congregations to which they belong. They had witnessed many big name anointed speakers and leaders come to Taiwan. This is evidenced by the fact that all their promotional materials just had pictures of John Chang and me on them with no reference to Cindy, Mary Ellen and Jidong who were also on the team and sharing in the teaching.

To encourage them to look at an alternative – a team model of leadership – we first had to model teamwork.

It was expected that John and I, the “big names” would do all the teaching. But we intentionally did not do that. Although we did do the major portion of the teaching, we also included the rest of the team in teaching, discernment and prayer.

For example, Cindy had the guidance that Jidong should step in and do the teaching on worldview. This was not the original plan but the team discerned that she should take on this assignment.

So, why Jidong? She was born in China, comes from an atheistic communist background and is a scientist. She was able to share about how her worldview was not just altered, but revolutionized to become a Christian. Her story and style of teaching related well to these women who faced similar obstacles in coming to faith in Jesus.

In other sessions, Cindy shared about living overseas, her own struggles and her need for the infilling of the Holy Spirit. Again, these women could connect with life experiences similar to their own. And on the final day it was Cindy who taught about how to be filled with the Holy Spirit.

When I was teaching I publicly acknowledged that Cindy was sitting right there often getting guidance of what I should do next, and Mary Ellen and Eddie Lee were in the back providing the intercessory prayer cover.

We showed that we were all together as a team of equals and that the anointing of the Holy Spirit was fluid.

All this was especially important in this culture that so often elevates men over women. As we went along, we pointed out this teamwork and explained what we were doing and why.

If you do not explicitly explain this dynamic of team leadership and how the Holy Spirit is working with you as a team, your modeling often will not have the intended effect. People will only see the externals and not be able to see or grasp the internal spiritual dynamics.

This made a great impression. Some of the leaders told us that they had never seen anything like this model of leadership. So the primary was to pass on the vision of team leadership is modeling it and then explaining to the group the internal dynamics of how the Holy Spirit is leading the team to cooperate together.

3. To lead others into the dynamic of cooperating with the Holy Spirit you must intentionally bring them into your team’s process of debriefing and discernment

The team from America have been working together for a long time so it would have been easy for us to just stay together and discern the moving of the Holy Spirit together.

But we immediately discerned that part of our being there was to intentionally nurture the CWC leadership team.

It was clear that they were very mature Holy Spirit-empowered leaders and that we were being invited and called to join with them in what the Holy Spirit was doing in their group.

So we invited the CWC leadership team to have a debriefing with us at the end of the teaching each day, before we broke for dinner.

We submitted ourselves to them and asked for feedback on the teaching and on whether it was meeting their needs.  We also shared with them the guidance we were getting for the next day’s teaching. Then we asked for their discernment about what the Holy Spirit was doing.

Not only were they learning how we discern as a team, they provided valuable insights that helped direct both the method and content of the teaching. This proved to be a wonderful time of the Holy Spirit working.

The principle here is that in order to grow people in leadership, especially as an anointed ministry team, it is necessary to provide the context where they are brought into the inner process of discernment and our own struggle to cooperate with the Holy Spirit.

4. Intentionally making the transition from us leading to the local team being in leadership

It seems to be God’s plan for raising up leaders, to consistently follow the pattern we see Jesus follow.

The local leaders were involved in various ways throughout the week, but the major transition came when it was time to pray for the outpouring of the Holy Spirit upon the group.

While I love laying hands on people to be filled with the Holy Spirit, we had already discerned in the team meeting that we (the team for the USA) were not to be the focus of laying on of hands but rather the women’s leadership team were to do the prayer ministry.

As preparation, in our team meeting we had a time of prayer for the Holy Spirit to come upon them to anoint them for leadership and to be the means through whom Jesus worked to bring others into this empowering work of the Holy Spirit.

We knew that this was a critical transition if this work was to continue to grow and include others.

Those within the group have to be able to pray for others to be filled with the Holy Spirit and not just depend on outside speakers and teachers to do that.

As we prayed, the Holy Spirit started to fall upon these leaders. We then moved into the main meeting room for the time of praying for the rest of the group.

First, we publicly laid hands on the CWC leadership team and anointed them with oil. Then I moved into the role of intercessor.

It was wonderful to watch the CWC Leaders praying for others and seeing the Holy Spirit move.

Later I started to receive words of guidance that the Holy Spirit was anointing people for different works within the fellowship, such as intercessory prayer, teaching, discernment, healing, evangelism and many others.

5. Intentionally build a framework where they can have the personal prayers and relational support to keep growing in cooperating with the Holy Spirit

After this great outpouring of the Holy Spirit and the obvious transfer of the anointing to the local leadership team, we returned to the USA.

But before leaving we put into place the means to continue to support and nurture this team.

The worst thing we could do was just to get on the airplane and abandon them. Jesus did not do this to his disciples when he sent them out two by two. He was there waiting for them when they got back. Then when he did ascend into heaven He sent the Holy Spirit as their guide and also left a team of leaders who embodied the reality of the Kingdom of God. He also promised that he would be praying for them and be with them, always, even to the close of the age.

Not that we are Jesus! But as the ones who embodied His kingdom work, we did need to put in place a way to continue the relationships and support. We did this both formally and informally over the concluding meal and prayer time together.

We did the following:

These five principles can help in the process of growing others in spiritual leadership.

When this does take place then the working of the Holy Spirit continues to expand to include more and more people with a multiplication of gifting for the upbuilding of the Church and the advancement of the Kingdom of God. Where this is not put in place, the results of the outpourings of the Holy Spirit may be a blessing for those who experience it firsthand but the blessings do not continue much beyond that group. God’s intention when He sends an outpouring of the Holy Spirit is that it will bring those who are touched will pass this engagement with Father, Son and Holy Spirit on to others, until the fulfillment of the Great Commission takes place.

Learn More about the Dunamis Project

To learn more about the Dunamis Project and how you can learn how to cooperate with the Holy Spirit, click here.