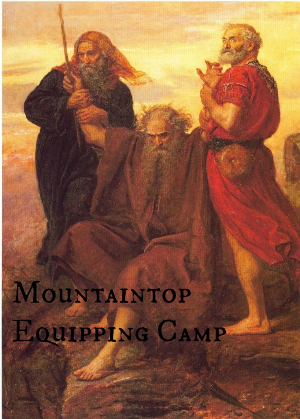 The Mountaintop Equipping Camp took place in mid-August 2016 at the Community of the Cross in North Carolina, but the equipping took us far beyond this physical place and time.

Doug McMurry gave us the big picture of God’s plans in the westward blowing wind of the Holy Spirit, then Brad Long outlined some of Satan’s opposing plans followed by prayer strategies for overcoming them.

Equipping Intercessors with Strategies and Tactics

The Mountaintop Equipping Camp is based on the model of Moses, Aaron, and Hur praying on the hilltop while Joshua is in the valley with the army of Israel fighting the Amalekites. (Exodus 17:8-17)

The purpose of the intensive equipping was to provide the context for the Holy Spirit to practically equip us as intercessors and spiritual warriors to take part in the prayer strategies and tactics for defeating the demonic strongholds of Radical Islam and advancing the Gospel into the Muslim world.

An Opportunity to Equip Those on the Front Lines

A most exciting part of this Mountaintop Equipping Camp was having representatives from the frontlines of the clash with Islamic Jihad from Uganda in Africa, the United Kingdom, and Pakistan.

(For security reasons it is best not to name or show pictures of them or other participants in this Camp).

A key concept we explored was the role of the “intercessory prayer cohort” as the vanguard of the prayer work.

This concept of individuals with various gifts and foci, who work together for a common purpose, is modeled by Moses, Aaron, and Hur.

Today, just as in the Old Testament, the cohort of anointed intercessors is the key to the accomplishment of God’s strategies of through us, defeating Satan’s plans, and advancing the Gospel.

A primary goal of this Mountaintop Equipping Camp is to equip the participants to be the leaders around whom these prayer cohorts form.

We were challenged by Brad’s words,

“God will have a special role for each of us in this great battle of defeating Radical Islam and advancing the Gospel into the entire Muslim world.

But this work of prayer is more than these battles!

It means taking part in the great waves of the Holy Spirit that are at work in the world today growing the Church and fulfilling the Great Commission. How is the Lord calling you?”

A Prayer Strategy for Jesus’ Victory Over Radical Islam

This teaching and practical application was based on the series written by Brad Long,  A Prayer Strategy for Jesus’ Victory Over Radical Islam.

This two-book series provides the basis of understanding the way Satan forms strongholds and the ways that the Holy Spirit calls us to cooperate with Jesus Christ in defeating them.

Hearing and Obeying the Call to Prayer

While the focus was on overcoming the strongholds based on Islam, the strategies and tactics learned apply to all the various strongholds that Satan has raised up to block the advancement of the Kingdom of God.

Through personal and small group prayer and discussion we sought where and how we were being called to engage.

Through worship and intercession, we began to walk out those calls.