The Annual Fellowship of the Dunamis Fellowship of Britain and Ireland was held the July 11-13, 2013 at Barnes Close Centre near Birmingham.

The sun shone; friends chatted; updates were given; business was done; but most of all God the Father was worshiped, God the Son was glorified and The Holy Spirit was manifestly present at times to minister.

What more could we have wanted? Oh yes, and we welcomed Cindy Strickler, Director of the DFI back to the UK!

The Fellowship meeting was shorter, with fewer participants than usual as the leadership team had made a conscious decision to prioritize attendance at Exousia held in March; a very beneficial event where many people had ‘pulled out all of the stops’ to attend.

Therefore reducing costs and the amount of time taken off from work or families for this fellowship was important.

Despite the ‘scale-down’ significant progress in the life of DFB&I was accomplished. 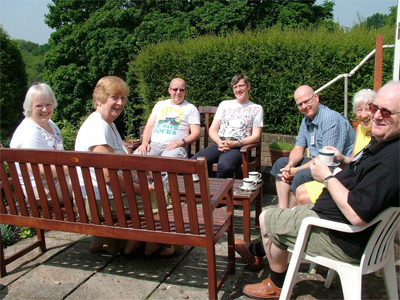 The Program–Worship, Reflection and Discernment

Opening worship, on Thursday evening focused on preparing ourselves to take our place as stones within the temple, based on Ephesians 2:19-22, leading on to putting Christ as the cornerstone on which we are building, and being willing to be placed where He puts us; depending on His strength.

This moved into an inspirational praise and worship time led by Brian Clarke.

Paul Stokes reflected on Tenet #7 of the Dunamis Fellowship—walking in the light with each other, seeing the value of relationships being restored by our vulnerability and willingness to be challenged by one another. 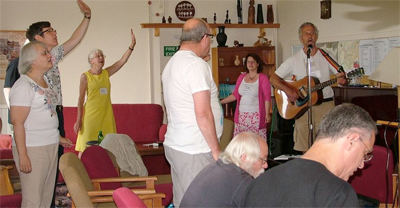 Time of worship at the DFB&I Annual Fellowship

This theme of vulnerability, challenging each other, working relationships and walking in the light with others was admirably ‘rolled out’ by Hilary Clark on Friday as she spoke about Nehemiah, the cup bearer to King Artaxerxes, requesting permission for supplies to go back and lead in the rebuilding of the walls of Jerusalem. (Nehemiah chapters 1-5)

Nehemiah, starting out from humble beginnings, had risen to be cup bearer to the king (‘those that are faithful in small things will be given much’). He had ‘blossomed’ there! He had then fasted and prayed (spiritual input), and prepared his ‘shopping list’ (practical application) before sharing his vision with the king. He was bold and knew exactly what to ask for and how to ask for it. Back in Jerusalem he analyzed the extent of the work before calling together the Israelites to form enthusiastic teams. They had to overcome many difficulties:

1) Attack: solution—split the teams—half to defend and half to work.
2) Lack: solution—share what you have.
3) Scoffers and mockers: solution—pray against them.

Hilary pointed out that in our ‘team working’ in DFB&I we need to be like paratroopers—always expect the enemy! We also need to be like a car—only when all the parts are working will the car go along properly. Only when we are all working together will the wheels of DFB&I turn properly.

Those who had attended the Exousia meeting in March spent one evening in corporate listening prayer. During this time they received various pictures and words from the Lord about DFB&I. There was a sense that this was unfinished as the words were not discerned and brought together in March. Cathy and Brian Clarke led the Fellowship in praying through the discernment that had been received. There was a real sense of agreement that the Lord was calling DFB&I forward into His future. Hosea 10:11-13 was agreed as being of real significance, both for the individual members of the Fellowship and for our life together, especially verse 12—“Sow righteousness for yourselves, reap the fruit of unfailing love, and break up your unploughed ground; for it is time to seek the LORD until he comes and showers his righteousness on you. But you have planted wickedness, you have reaped evil, you have eaten the fruit of deception. Because you have depended on your own strength and on your many warriors . . .” The Lord is calling us into deeper personal and corporate holiness, to be mature in our spiritual walk, to ensure that we deal with each other directly and honestly, and to stop living in the past, whether that is the glories of the past or the difficulties of it. He showed us His heart that He wants us to be more committed to prayer for the events which are ongoing and coming up and for one another, so that the fellowship builds in His authority, not ours. We are also, as DFB&I, to recognize the mantle that has been passed to us by PRMI to take responsibility for the work here; and there was a real sense that this meeting had taken considerable steps forward, in the official recognition of Paul Stokes as Director of the DFB&I and in the restoring of relationships.

Changes to the Leadership Team

The fellowship wholeheartedly agreed with the Trustees appointment of Rev. Paul Stokes as the Director of DFB&I. Paul has always played a significant role in the DFB&I and its leadership (also in PRMI and the Dunamis Institute), but up until now although he had been carrying out many of the roles and responsibilities of a Director he neither had the official authority or the accredited title. On behalf of PRMI and the Trustees of DFB&I, Cindy formally anointed and commissioned Paul as Director. All the people said “Amen, amen.” Paul was delighted to formalize his role and felt that as he was being prayed for there was a ‘shift in the heavenly’ realm of responsibility from the USA to UK. Brad (back in the USA) sensed a similar ‘shift’. 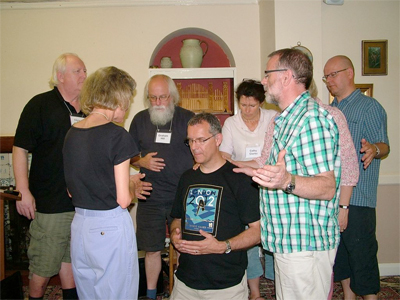 Rev. Paul Stokes being commissioned as Director of the DFB&I

Closing the Fellowship in Unity

The fellowship meeting was brought to a close with communion led by Rev. Bernard Fidder. There was a great sense of unity and hope for the future in what God can accomplish through the DFB&I if we keep our eyes firmly fixed on him and work together as a team just as Jesus intended the body of Christ to be.

To read more about what is happening in the DFB&I, see the Reports and Updates HERE.

Pauline Eyles is a member of the DFB&I.